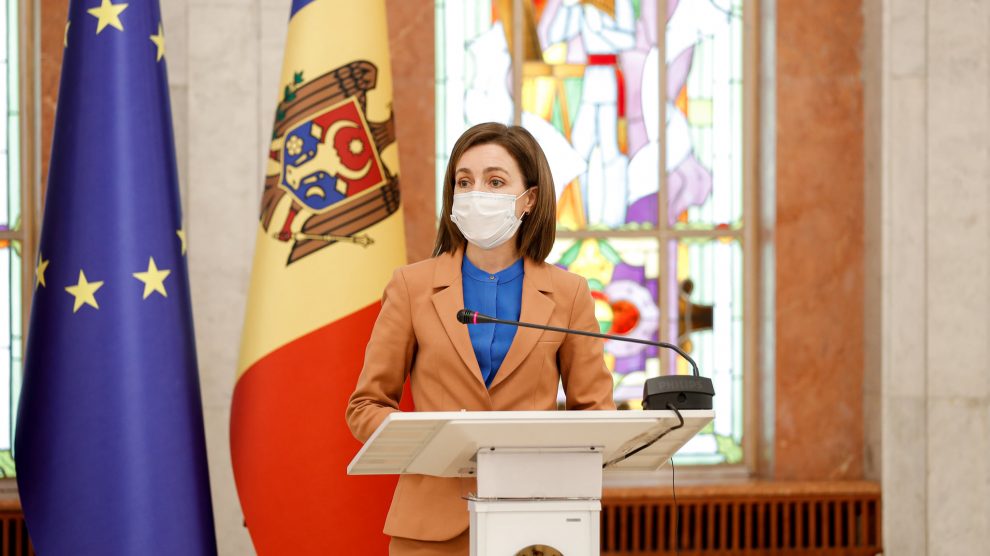 Moldovan president for just six months, Maia Sandu has lost no time in taking on a hostile political establishment and winning several key victories. A parliamentary election on July 11 looks set to offer her a sizeable majority that could finally, three decades after independence, kick start genuine reform of Europe’s poorest country.

Ever since she was elected president of Moldova in November last year, Maia Sandu has made little secret of her desire to radically reform Europe’s poorest country.

Long portrayed by the international media, in overly simplistic terms, as “pro-European” (as opposed to her predecessor Igor Dodon, who favours closer ties with Russia), since taking office the Harvard-educated Sandu has made not Europe her priority, but fighting corruption, which she believes – not without reason – to be the main cause of the country’s widespread poverty.

So far, she has been held back by a parliament which, as she puts it, “does not truly represent Moldovans”. On July 11 however, the country will vote for a new parliament, and if the latest opinion polls can be believed, Sandu’s party, Action and Solidarity (known by its Romanian acronym, PAS), is set for a landslide victory.

“Only a new election, a new parliament, and a new government that will work in the best interests of us all” can fix Moldova, Sandu said in April when she finally got her wish to dissolve the current legislature.

That she was able to do so was itself a key victory, the result of great tenacity and recognition that alone – Moldova’s president has few powers – she could do very little. With the few constitutional tools at her disposal, however, she has so far managed to outmanoeuvre all of her opponents.

Moldova has been without a formal government since December 23 last year, when Ion Chicu resigned – just a day before Sandu took office.

Chicu’s government was a shaky coalition of two centre-left parties, the Moldovan Socialists (PSRM) of former president Dodon, and the Democratic party, formerly led by the oligarch Vlad Plahotniuc who is currently fighting extradition to Moldova from the US on corruption charges.

To replace Chicu, President Sandu twice nominated Natalia Gavriliță, a former finance minister, to be the country’s next prime minister, knowing full well that Gavriliță was highly unlikely to receive the backing of Moldova’s parliament. According to Moldova’s constitution, Sandu can dissolve parliament if it twice fails to approve a new executive.

In February, however, the country’s top court ruled that Sandu had acted unconstitutionally by twice nominating Gavriliță, reasoning that Sandu should have accepted a proposal from 54 MPs (primarily from PSRM) to instead nominate Mariana Durleșteanu, a former Moldovan ambassador to the UK.

Back then, Sandu vowed to stand her ground, saying that, “I have said repeatedly that the only way for Moldova to move forward is to organise new parliamentary elections.”

Moldova then took a step closer towards an election on April 15 when the court changed its mind, ruling that Sandu was free to dissolve parliament.

However, there was a twist: the court added that parliament cannot be dissolved during a state of emergency.

Moldova’s lawmakers voted to introduce a state of emergency for a period two months on March 31. The move was ostensibly to help the country control the spread of the Covid-19 pandemic, but was widely viewed as a last-ditch attempt by Sandu’s opponents to block the dissolution of parliament and delay a new election further.

Sandu again stood her ground, asking the court to rule on the legality of the state of the emergency itself.

On April 28, the court ruled that the state of emergency was indeed illegal. Sandu immediately dissolved parliament, saying that, “power is now in the hands of people. The fight to clean up our political class, to eradicate corruption, is tough, and the path to a better Moldova is a long one. But we are now heading in the right direction.”

“We are closer than ever to bringing an end to chaos. We have given ourselves the opportunity to do just that. We must be wise in what we choose to do with that opportunity,” she added.

One of the final polls ahead of the election, published on July 1, suggests that Moldovans are about to hand Sandu’s party not just a majority, but a majority large enough to implement constitutional changes.

The poll, carried out by CBS-Research, a local affiliate of the European Endowment for Democracy, puts support for PAS at 35 per cent, well ahead of Dodon’s Socialists (who have formed an electoral pact with the Moldovan Communist party of another former president, Vladimir Voronin) on 21 per cent. Amongst those who say that they are certain to vote, support for PAS jumps to over 50 per cent. What’s more, besides PAS and the Socialists, no other party or electoral bloc would enter parliament, meaning that PAS would be redistributed enough to seats to claim its constitutional majority.

The poll does not include the voting intentions of Moldova’s large diaspora, which in the presidential election voted overwhelmingly with Sandu. This despite long queues at polling stations and a lack of ballot papers which left tens of thousands unable to vote.

On June 22, in another victory for Sandu, Moldova’s supreme court ordered the Central Electoral Commission to open more polling stations abroad: there will now be 191, up from 139 in November.

The poll also fails to include respondents from Moldova’s breakaway region of Transnistria, home to around 10 per cent of the electorate (almost all of whom are ethnic Russians, who traditionally vote socialist or communist). However, the difficulties Transnistrians face in voting have seen the numbers doing so greatly reduced in recent elections.

In November’s presidential election, just 12 per cent crossed the Nistru river (the Transnistrian authorities do not allow polling stations to be located in the territory they control) in order to vote. While almost all of these votes went to Dodon, their numbers were nowhere near high enough to change the outcome of the election, which Sandu won by a landslide.

The same opinion poll also revealed that support for unification with Romania stands at just 35 per cent, vindication for Sandu’s strategy of keeping Romanian politicians who might want to help the PAS campaign at arm’s length.

Moldova’s ethnic Russian, Ukrainian, and Gagauz minorities — who make up around a quarter of Moldova’s population – get understandably spooked when Romania takes any kind of interest in the country, viewing it as the first step towards the eventual unification of the two countries.

Most of present-day Moldova was for part of the 20th century an integral part of Romania, but while talk of reunification was once prominent, few have ever given the idea serious credence: not least because most Moldovans oppose it.

Furthermore, except for a few extreme nationalists, such as the Alliance for Romanian Unity (AUR; a Romanian parliamentary party which is fielding candidates in Moldova’s election), most Romanian politicians appear to have tacitly accepted that history and politics aside, Romania simply could not afford to absorb Europe’s poorest country.

Few admit to that publicly, but in preferring to utter polite but ultimately meaningless statements about a “strong partnership” and “support for Moldova’s European integration”, as opposed to explicit support for unification, they do just that.

In doing so, and by staying away from the campaign trail – Romanian politicians once had a habit of making high profile, usually counterproductive visits during Moldovan election campaigns – they might well have helped Moldova’s Russian speakers view Sandu, and by association PAS, more favourably. Sandu has made a point of repeatedly stating that she wants “true balance” in foreign policy and “pragmatic dialogue with all countries including Romania, Ukraine, European countries, Russia and the United States”.

Dodon’s deal with the communists also looks increasingly like an own goal: few were impressed when communist leader Voronin said earlier this month that a PAS-dominated parliament would allow NATO troops into Moldova, leading to “Moldovan babies being born with a dark skin colour”.

A decade or so ago such scaremongering worked. Today, less so.

It’s also worth noting that support for AUR in Moldova is currently well below the threshold for entering parliament, which is why some have not been shy to suggest that it is a stooge, designed to scare wavering ethnic Russians into voting for the socialists and communists.

That AUR has been at least trying to campaign in Transnistria – the last place on earth you would expect to find Romanian unionists – only adds grist to the rumour mill.

What now looks almost certain however – with the usual caveats that much could change before July 11 – is that Maia Sandu is about to become the most powerful leader post-Soviet Moldova has ever had.