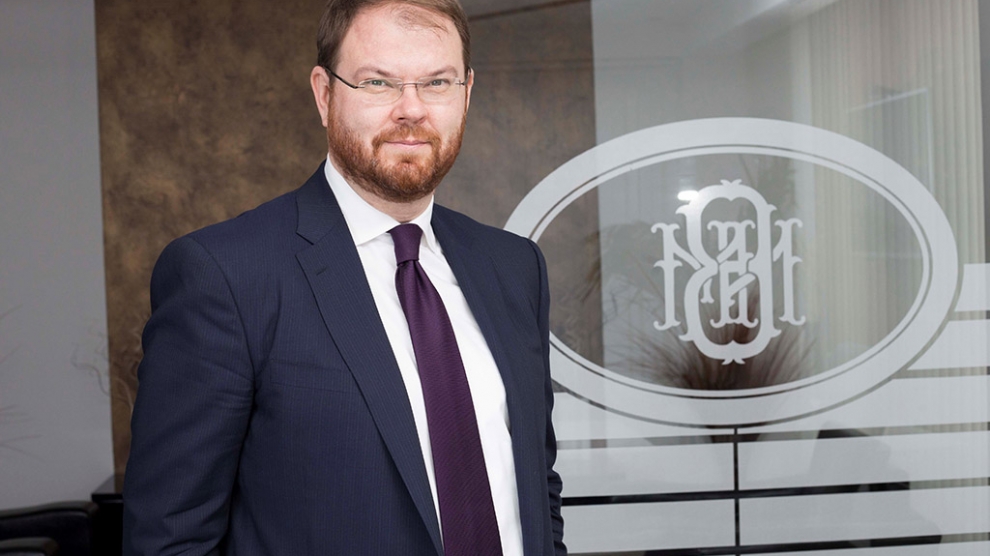 Sergiu Cioclea, the head of Moldova’s national bank from 2016 until his resignation in November 2018, has been credited with restoring trust in the country’s banking sector. Andrew Wrobel spoke to him about his time in office.

Moldova’s banking crisis of 2014, when more than one billion US dollars disappeared from three commercial banks (Banca de Economii, Unibank and Banca Socială) led to the collapse of the three banks and created a hole amounting to more than 25 per cent of the country’s total banking assets, or around 12 per cent of GDP. When Sergiu Cioclea took over at the National Bank of Moldova (NBM) in April 2016, his most urgent and challenging task was to contain the crisis and restore credibility for Moldovans, the financial markets and for the country’s international partners.

“The authorities of the time decided to plug the gap by guaranteeing and reimbursing in full the deposits of the three insolvent institutions,” says Mr Cioclea. “Following the political turbulence and the ensuing halt of external financing from the IFIs, the yields on government debt surged to almost 30 per cent and maturities fell against the backdrop of growing budgetary arrears. All the ingredients for a second wave of financial turmoil – through a public debt crisis – were in place, which would have undoubtedly hit the rest of the banking sector, gorged as it was on treasury bills. This would have led to another currency devaluation and all the repercussions that entails.”

In such circumstances, reaching an agreement with the IMF was crucial, says Mr Cioclea.

“The NBM and the Ministry of Finance, led at the time by Octavian Armasu, played a pivotal role in securing the IMF programme. The three-year deal, which runs until November 2019, is very ambitious and complex. Its numerous actions focused on stabilising the banking sector, restoring shareholding transparency and corporate governance in all banks, promoting key legislative reforms such as Basel-III regulation, bank recovery and resolution legislation, but also strengthening the deposit guarantee fund and financial market infrastructure.”

The results have been impressive, and in just two years, the reform programme has yielded substantial benefits.

“It helped to restore public confidence and settle down the financial markets,” Mr Cioclea tells Emerging Europe. “The Moldovan currency stabilised and even appreciated. International reserves doubled to reach more than six months of import coverage. Consumer inflation declined from almost 14 per cent in early 2016 to less than one per cent in December 2018. Domestic interest rates reached historically low levels. After a peak at around 30 per cent in early 2016, yields on treasury bills decreased to around 4-5 per cent at the end of 2018.”

The situation in the banking sector has also improved. Following the NBM’s implementation of expanded inspections, all losses and NPLs have been fully recognised across the system and duly provisioned.

“The total non-performing loan ratio decreased from 18.4 per cent in 2017 to 12.5 per cent in December 2018. The temporary moratorium on dividend distribution in problematic banks helped to boost the system’s overall capitalisation to over 27 per cent CAR. After a credit crunch in the aftermath of the banking crisis, lending activity started to pick up, recording steady growth in 2018.”

Nevertheless, Moldova’s credit-to-GDP and loan-to-deposit ratios are low even by regional standards, says Mr Cioclea. “The access of SME’s and private individuals to credit remains complicated, despite recent progress. It is evident that the Moldovan banking industry does not entirely fulfill its role of financial intermediator and contributor to the development of the real economy. The biggest challenge now is to consolidate the lending recovery so that domestic banks channel their large deposit base into healthy credits to the economy and diversify their clientele. The objective of the central bank was to accelerate this transformation process by attracting experienced international investors in the domestic banking sector.”

One of the most positive signs of a return to something resembling normality was the successful sale of three Moldovan banks in 2018. Romania’s Banca Transilvania purchased – together with the EBRD – a controlling stake in Moldova’s third largest lender – Victoriabank; Intesa San Paolo took over Veneto Banca’s subsidiary in Moldova, Eximbank – the fifth largest bank in the country – as part of a deal with the Italian treasury; and an international consortium comprising Horizon Capital (a US private equity fund), Invalda (a Lithuanian asset manager) and the EBRD purchased a 40 per cent stake in the biggest domestic bank, Moldova-Agroindbank.

“Back in 2016, the proportion of domestic banking assets managed by international investors was 26 per cent – a figure comparable to the share of foreign banks in Ukraine and in Russia. In 2018, this coefficient rose to 71 per cent, closer to the proportions observed in neighbouring EU countries, such as Romania or Bulgaria,” said Mr Cioclea.

“This is to a large extent the result of the central bank’s decisive actions to promote shareholding transparency in a sector marked for too long by ownership opacity.”

Without doubt, the IMF support was crucial in 2016 in pulling Moldova back from the financial precipice to which the banking crisis had led the country.

“The IMF support, supplemented by funds from the World Bank, the EU and Romania, helped keep the budget afloat that year and calm the financial market,” says Mr Cioclea. “Resolute reforms implemented under IMF auspices in the banking sector and tax-collection systems produced remarkable results and started to generate modest, but tangible virtuous circle effects on the macroeconomic environment and fiscal performance. However, these achievements remain fragile and require deeper structural reform. In this respect, the IMF and the World Bank provide high-quality technical assistance and advice.

The EU has also supported the national bank’s reforms by financing a twinning project aimed at designing a new Basel-III-inspired legislative framework. A new banking law was prepared with the help of specialists from the central banks of Romania and the Netherlands, and the entered into force in January 2018.

“The twinning project was instrumental in helping the National Bank of Moldova overcome a know-how shortage and benefit from peer advice,” adds Mr Cioclea. “Much more regrettable has been the recent decision of the EU Commission to halt technical assistance programmes for Moldova against the backdrop of political problems with the authorities. As a result, they stopped another twinning project, dedicated to the reinforcement of banking supervision, the deficiency of which was one of the reasons behind the 2014 bank fraud. As far as the EBRD is concerned, the institution showed strong support to banking reforms by co-investing together with reference shareholders in two systemic banks this year – Victoriabank and Moldova-Agroindbank. Given our country risk profile, the EBRD equity commitment played an anchor role in building and securing investor demand for Moldovan banking assets. Excellent cooperation with the EBRD helped to structure these deals and get them done.”

The Moldovan leu (MDL) celebrated its 25th anniversary in 2018. Mr Cioclea believes that the currency is in as strong a position as it ever has been.

“The leu’s history was marked by three turbulent episodes in 1998, 2008 and 2015, following international or domestic financial crises,” he says. “After losing around 30 per cent of its value in 2015, the leu regained about two-thirds of the lost ground in 2016-2018, making it one of the best-performing currencies in emerging Europe over the period. Such a trend favourably differentiated MDL-denominated assets and, along with other measures, supported the reduction of interest rates in the financial and credit markets, which achieved historical lows.”

Moldova’s flight to hard currency – which peaked during the 2015 crisis – has now been reversed, with around 60 per cent of total banking loans and deposits being now denominated in MDL. “This is a creditable level compared to many countries in the region,” says Mr Cioclea. “The Moldovan leu gained its first international recognition this year, being accepted for the first time in its history on a large scale basis in foreign exchange and banking operations outside its borders, in Romania, Moldova’s largest foreign trade partner. If we add other EU countries, the European Union absorbs almost 70 per cent of Moldovan exports and represents more than half of its imports. Such a profound reorientation of foreign trade to the EU is a remarkable outcome of the DCFTA agreement signed in 2014 and in effect since 2016. The EU has also supplanted the CIS as the main area of origin of the Moldovan diaspora’s remittances. Less dependence of more volatile CIS markets, including Russia and Ukraine, should make the Moldovan currency more resilient to regional instability.”

Mr Cioclea believes that despite Moldova’s reputation as being one of the poorest countries in Europe, it has great potential, but needs to learn how to multiply its wealth.

“Moldovan commercial banks are full of money,” he says. “The money keeps flooding from the high level of remittances sent by our expatriates. However, less than half of these deposits are converted into credits. The rest of the liquidity, which is not invested in government paper, is being sterilised by the central bank in one way or another. This represents an impressive sum by Moldovan standards, about 1.5 billion euros or 20 per cent of GDP, which could be channelled into productive or infrastructure investments to create value and modernise the country, instead of ‘sleeping’ at the National Bank.”

Mr Cioclea believes that there is a good chance of transforming Moldova from a consumption-driven economy to an export-oriented investment-intensive country by attracting foreign investors and encouraging domestic investment.

“The experience of the so-called free economic zones, that concentrate a large number of automotive and other industrial producers, is very positive,” he says. “The main challenge is to scale-up successful business models to the entire country, without relying too heavily on fiscal sweeteners. This implies inter alia investing in infrastructure, but also human capital to cut down the immigration phenomenon, which took worrying proportions. Such measures are amongst the Government’s strategic priorities. The National Bank’s role is to ensure a predictable and stable macro-financial environment and also to fully fix the crediting mechanism of the banking sector.”

Investing in Bosnia and Herzegovina
Sikorski: Poland could be better
Comment