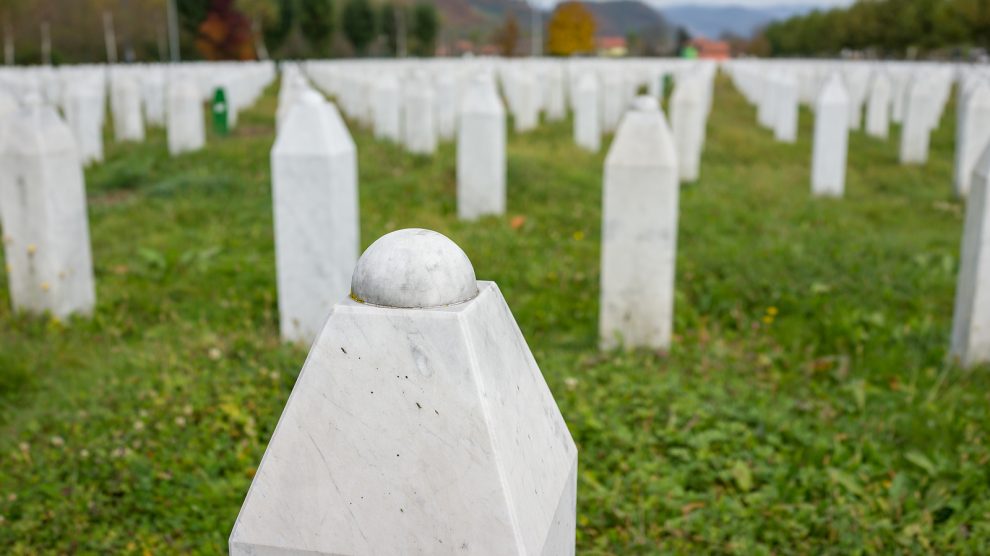 A resolution condemning the Srebrenica genocide, passed last week by Montenegro’s parliament, is testing the country’s already rocky relationship with its closest neighbour Serbia, as well as  the stability of Montenegro’s big tent coalition.

On July 17, the parliament of Montenegro passed a resolution condemning the Srebrenica genocide, committed by Bosnian Serb forces in 1995 when around 8,000 Muslim men and boys were killed.

The resolution also prohibits denial of the Srebrenica genocide, and establishes July 11 as a day of remembrance for the victims.

It was put forward by the opposition Bosniak party, with support from MPs from President Milo Đukanović’s Democratic party of Socialists as well as lawmakers from two parties that form part of Monetenegro’s ruling coalition, United Reform Action (URA) and Democratic Montenegro.

During the same session, parliament also voted to dismiss the justice minister, Vladimir Leposavić, for disputing that the killings in Srebrenica constituted genocide. Leposavić had hitherto refused to quit, prompting the prime minister, Zdravko Krivokapić, to demand his removal.

Unsurprisingly, Serbia is not happy with the resolution. Serbian President Aleksandar Vučić said that went “against the vital interests of the Serbian people” and that Montenegro is meddling in things not of its concern, “as Srebrenica is not in Montenegro”.

With the former Bosnian Serb army chief Ratko Mladić recently sentenced to life in prison – in large part for his role in the Srebrenica genocide – the resolution comes at a time when Serbia is once again grappling with the fallout of the Yugoslav wars of the 1990s. While the Serbian parliament itself passed a resolution in 2010 condemning the Srebrenica massacre, it did not describe it as genocide.

The issue of whether or not what happened in Srebrenica amounts to genocide remains enormously contentious in a country where many still see Mladić and Radovan Karadžić, who served as the president of Bosnia’s Republika Srpska during the Bosnian War, as heroes rather than war criminals.

Vučić has stated that while he is president, he will not agree to any resolutions being passed in Serbia about Srebrenica. Two such resolutions were recently proposed, one that would condemn Srebrenica as a crime (by the People’s Peasant party, part of the coalition that governs with Vučić’s Serbian Progressive party) and one that would term it a genocide (by the opposition Party of Democratic Action, Sandžak, a minority Bosniak party).

Relations between Serbia and Montenegro have been rocky in recent years, with 2019 and 2020 both seeing widespread protests against a law that the Serbian Orthodox Church maintained would lead to its property in Montenegro being seized by the state. One of the first actions of the new Montenegro government, led by Krivokapić, was to repeal the law.

The ruling coalition also relied on the support of the pro-Serbian Democratic Front (DF) which in response to the Srebrenica resolution has announced it will boycott parliament, calling into question the survival of the current Montenegro government.

The Democratic Front is the single largest member of the ruling coalition with 16 seats.

At a press conference following the passing of the resolution, DF leaders Andrija Mandić and Milan Knežević attacked the prime minister and the leaders of the other coalition parties, saying that it amounted to declaring the Serbian people “genocidal” and “destroying” Montenegro’s relationship with Serbia.

DF has called on Krivokapić to resign.

However, some political commentators, such as Daliborka Uljarević, the executive director of the Montenegro Centre of Civic Education, point out that the resolution does not proclaim any people as “genocidal” but rather stresses individual responsibility for the atrocities.

“It’s their [Serbian officials] attempt to win back their influence in Montenegro, to make it into what they made out of Republika Srpska — to have control over the territory,” she says.

Condemning the Srebrenica genocide is in line with Montenegro’s aim to join the European Union. In 2015, the European Parliament passed a similar resolution about Srebrenica. But it is clear that the move from the Montenegro government and Prime Minister Krivokapić could come at a high political cost.

Leaders of the ruling majority parties are expected to meet on June 24 to discuss how to overcome the crisis.

Ahead of the meeting, Krivokapić has stated that he has no intention to resign.

As Turkmenistan’s economy sinks, its capital becomes world’s most expensive place to live
Governments must remember that digitalisation is about making life better
Comment