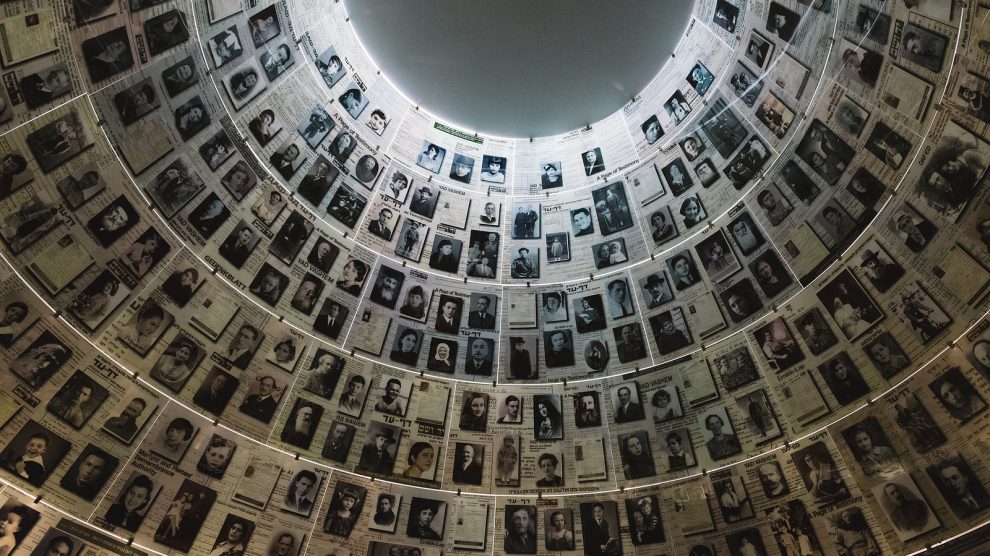 Released in 1985, the epic Holocaust documentary Shoah won critical acclaim and several prominent awards. The film is now being reevaluated, however, not least the way it deals with Poland’s Holocaust experience.

Claude Lanzmann’s 1985 nine-hour documentary film Shoah consists only of interviews. There is no arrival footage, no musical background and no narration.

The interviews are often conducted in the locations the film’s interviewees – mainly the Polish or German witnesses, but not most of the Jewish survivors – are describing.

Lanzmann stressed what he called the topographical character of the film, with a lot of time spent silently panning empty fields, forests, or camp remains. This was, he said, meant to combine knowledge of past events with an experience of space. The film was supposed to become a “new form” that would tell a different story about the Holocaust. Lanzmann called it “a fiction of the real”, allowing the viewer to experience the film as an event in itself.

The key role in the film is thus played by conversation and descriptions of the Holocaust as remembered by the witnesses, perpetrators and bystanders. It does not aim to reveal new facts, but to bring up imagination, symbols, desires, images and interpretations, for all involved, including the viewer. The aim – he said – was to create an impression of an entanglement of two orders in one place – “here and now” and “there and then.”

The words of the witnesses are interpreted on the spot from Polish, Yiddish and Hebrew into French. In the subtitles, both French and English, some sentences are skipped and the plurality of voices is sometimes lost, the result being more of a summary than a translation.

The speakers sometimes engage in conversation on the side, comment on the situation of the interview in various ways.

Understanding the editing process is central to apprehending the role of translation in Shoah,” Remy Besson, from the Technès international partnership project at the University of Montreal, tells Emerging Europe.

“Indeed, in the film, we almost never hear the whole of the interviews that were shot. The director and his editor have chosen each word spoken by the witnesses with careful attention. It is important to know that the editor did not speak Polish. She worked from the transcripts of the verbal content of the interviews. It was therefore the meaning of the words spoken in French that guided the editing process. This process of sound editing led, among other things, to an accentuation of Polish anti-Semitism.

“I think the main idea is to let the viewer have time to understand and incorporate the narratives carried out by the witnesses,” Besson says.

“However, in the case of the interviews in Poland, the idea is also to stage the translator, Barbara Janicka. The idea is to represent her as a figure between the director and the Polish Bystanders. She is neither completely on one side nor completely on the other.

“The film is very much rooted in the late 1970s and early 1980s, a time when Holocaust deniers were very much in the forefront, but also at a time when the specificity of the Holocaust was not clearly understood by all,” Besson says.

“Finally, it is important to explore this material in the context of all kinds of issues that are contemporary to us.”

Professor Francine Kaufmann – the Hebrew interpreter in Israel for Shoah and Sobibor (2001) and for The Four Sisters (Les Quatre Sœurs) (2018) – tells Emerging Europe that working with Lanzmann was “a challenge”.

“I received no preparation. I suspect that Lanzmann wanted to hear, in my voice, my astonishment, he wanted me to ‘experience’ the words. I presume also that the ‘delayed’ or ‘echo effect’ of asking a question twice and it being answered twice, gave a gap for reflection, a period of nothingness, of void. But Lanzmann was hard to work with,” Kaufmann says.

Asked if he was “dictatorial,” she answered: “Oh yes. He rarely explained what or why he was doing or asking things. I sent him, before publication, in around 1992, my first academic text on the role of the interpreter in Shoah, in order to know his own opinion, receive reactions, precisions, but he ignored it.

“I realised only later what a cult film I was a part of and began to learn. The role of the interpreter was part of the process of double layered testimony,” Kaufmann says.

Lanzmann’s film challenges this idea of equivalence in translation, what he called a socially useful fiction. There are no “mistakes of memory” and “untrue statements”, but a complex narrative, concealing numerous layers of knowledge and ignorance.

When the film first came out in 1985 Poland’s communist authorities showed just two hours or so, the parts related to Poland. The official reception in Poland was largely negative.

After 1989, the democratic authorities initially balked at showing the film in full, but then permitted Canal+, a French-owned channel, to do so in 1997. Jan Gross’s revelations about gentile Polish complicity in murders of their neighbours, Polish Jews, at Jedwabne in the second year of the war were published in 2000 and Poland began a period of soul-searching that continues to this day.

One of Poland’s post-communist foreign ministers, Władysław Bartoszewski, an Auschwitz survivor, criticised Lanzmann for ignoring the thousands of Polish rescuers of Jews, focusing instead on poor rural Poles, selected – he argued – to conform with his preconceived notions.

Gustaw Herling-Grudziński, a Polish writer and dissident, was questioned why Lanzmann had omitted talking with anybody in Poland with advanced knowledge of the Holocaust.

The Socio-Cultural Association of Jews in Poland called it a provocation and delivered a protest letter to the French embassy in Warsaw.

“No, we have not finished with this film yet,” Dorota Głowacka, director of the King’s Contemporary Studies Programme at the University of Kings College in Halifax in Canada, tells Emerging Europe.

There are over 300 hours of fragments of outtakes that were not included in the final version of Lanzmann’s film, as Głowacka notes in her book The Construction of Testimony: Claude Lanzmann’s Shoah and its Outtakes.

In it, Głowacka studies how Lanzmann treated the Polish language in the film, and what this reveals about the director’s biases.

“Changing attitudes towards Lanzmann reflect the debate in Poland about Polish-Jewish relations, like a litmus paper. It’s like two Polands in parallel, opening and and closing,” she says.

“What has remained constant through these different phases of the film’s reception is the view that the film only emphasises the conflict between Polish and Jewish memories of the fate of Polish Jews during the Holocaust.

“In my view one of his strategies was a linguistic one, aimed at the Polish language as the carrier of Polish national values and attitudes, which included a centuries-old legacy of anti-Semitism. It seems that, throughout the Polish translation sequences [the] Polish language itself — indelibly marked by the trauma of the extermination of Polish Jews — is put on trial before the camera.”

Noting that Lanzmann shows great attention to detail elsewhere, including in his treatment of other languages, Głowacka points to the many misspellings of Polish proper names that are found in the English subtitles of the film.

The outtakes include a conversation a Jewish survivor named as Srebnik (his name is Srebrnik) has with workers at the site of mobile gas vehicles in Chelmno. Glowacka says Srebrnik is extremely assertive when talking in Polish, and that this was cut by Lanzmann as it didn’t fit his narrative of Polish complicity, Polish anti-Semitism and backwardness.

“In contrast to what I see as Lanzmann’s dismissal of Polish testimony — his view that Poles were ‘false witnesses’ — I give credence to Polish villagers’ desire to testify to what happened to the Jews, even though what they say is overlaid with anti-Semitic prejudice.”

Where is the film now?

Lanzmann’s raw footage, along with the transcripts, are available on the website of the United States Holocaust Memorial Museum. The entire 566-minute film was digitally restored and remastered by The Criterion Collection.

Lanzmann, who died in 2018, released four feature-length films based on unused material shot for Shoah: A Visitor from the Living (1997) about a Red Cross representative, Maurice Rossel, who wrote a favourable report about the Theresienstadt concentration camp in 1944; Sobibor, October 14, 1943, 4 p.m. (2001) about Yehuda Lerner, who participated in an uprising; The Karski Report (2010) about Polish resistance fighter Jan Karski’s visit to Franklin Roosevelt in 1943; and The Last of the Unjust (2013) about Benjamin Murmelstein, a Jewish rabbi in the Theresienstadt ghetto during World War II.

Four Sisters aired as a four-part series on French TV, and chronicles the lives of four women who escaped the concentration camps and tried to find a life after the Holocaust.