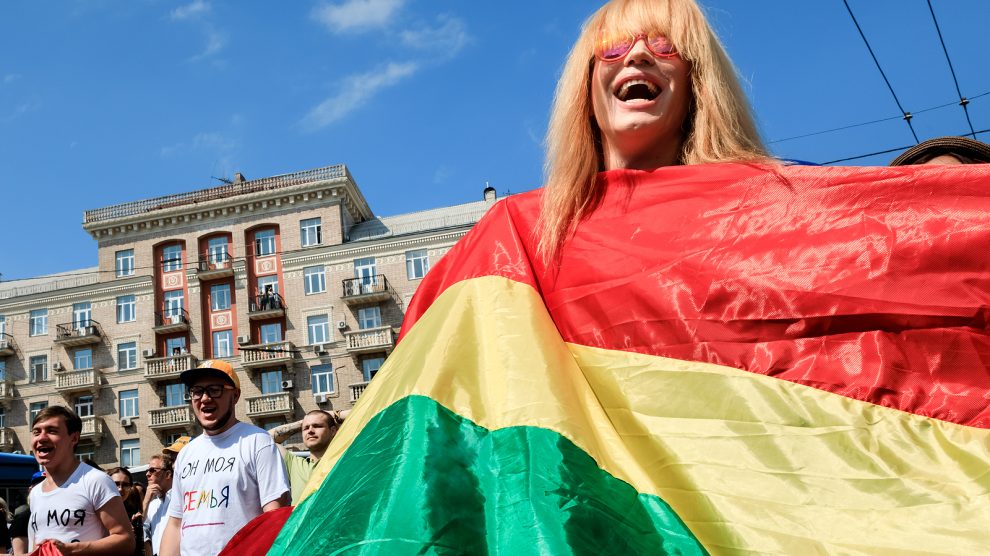 While several governments in emerging Europe actively chose to take real action over the past 12 months to progress LGBT+ equality, there has been backsliding too, notably in Bulgaria and Romania.

The latest edition of ILGA-Europe’s annual Rainbow Europe Map and Index, ranking the legal and policy situation of LGBT+ people in 49 European countries, finds that over the past 12 months a new dynamic has appeared to fill in the gaps that exist around LGBT+ rights and push standards, giving governments ground to build upon as democracy in Europe faces exceptional challenges.

But it’s not all good news. By contrast, some countries, including the UK, that once were leading lights on LGBT+ rights are slipping down the ladder, while others are in danger of following the precedent of countries where LGBT+ rights are being instrumentalised for political gain.

Released every May since 2009, marking International Day Against Homophobia, Transphobia, Biphobia, and Intersexphobia (IDAHOBIT), the ILGA-Europe Rainbow Map ranks all 49 European countries on a scale between zero per cent (gross violations of human rights, discrimination) and 100 per cent (respect of human rights, full equality).

This year’s findings are a welcome contrast to those of the 2021 map, which identified a complete stagnation on LGBT+ rights and equality across Europe, and several countries from emerging Europe are among those which have made progress.

After years of being stalled there is positive legislative movement in Latvia, Lithuania, Serbia, Slovakia, and Slovenia, countering the narrative that there is an East/West divide on LGBT+ rights in Europe, providing governments in these countries with strong opportunities to underpin democracy through adoption and implementation.

According to ILGA-Europe’s executive director, Evelyne Paradis, “it is encouraging to see that several governments actively chose to take real action over the past 12 months to progress LGBT+ equality, and as a result, that the Rainbow Map looks positively different compared to this time last year. In the face of anti-LGBT+ forces which remain rife across Europe, we welcome the renewed mobilisation by a growing number of politicians and government officials to do what is needed to improve the lived realities of LGBT+ people. More is definitely needed to strengthen this upward dynamic in the coming year.”

Unfortunately, it’s not all good news.

Amid a rise in official anti-LGBT+ sentiment in Bulgaria and Romania, both countries are now not far off the lowest ranking in the EU, which currently belongs to Poland.

Romania is losing points due to authorities’ obstruction of freedom of assembly by banning and punishing Pride events. Meanwhile, Hungary moved down three places, mainly because its parliament adopted a number of amendments which directly discriminate against LGBT+ people, including a ban on the “portrayal and the promotion of gender identity different from sex at birth, the change of sex and homosexuality” for persons under 18.

“A downward spiral of hostile political discourse, legislative stagnation and, in some countries, even withdrawal of LGBT+ rights and freedoms is worrying. And while countries like Bulgaria and Romania, for example, have not been in the headlines, they are moving down in ranking, nearer and nearer to Poland, which is at the very bottom in the European Union.”

Ukraine went up one place in the Rainbow Map ranking because of a removal of restrictions on blood donations for men who have sex with men, which came into effect in June 2021, just over six months before the Russian attack on the country began.

ILGA-Europe’s companion to the Rainbow Map, the Annual Review, found that prior to the current war, there was cautious optimism from LGBT+ activists about the way forward, with a willingness to discuss legislative rights from several politicians.

Post-war this should provide Ukraine with a bedrock on which to build a legislative framework that protects all its citizens, and a society that values LGBT+ people as part of its democratic composition.

“LGBT+ human rights and equality are a marker of a democratic society where the human rights and freedoms of all citizens are wholly respected and upheld,” adds Paradis. “Recent history has taught us that one of the first steps towards erosion of democracy is the official scapegoating of LGBT+ people and undermining of their human rights. This essentially is an act of targeting a vulnerable minority to undermine broader freedom.”

“As ILGA-Europe have been warning for years, recent events in Europe prove that we cannot be complacent when the political targeting of minorities is being used by anti-democratic forces. The antidote to complacency is action. It is imperative at this time that we proactively advance equality by creating ever-more robust policies and practices to make sure our societies are truly fair, inclusive and respectful of everyone,” Paradis concludes.

For the seventh year in a row, Malta continues to occupy the number one spot on the Rainbow Europe Map, with a score of 92 per cent.

With a score of just two per cent, Azerbaijan is last in the ranking. Montenegro is the highest ranked country in the emerging Europe region, in eighth place with a score of 63 per cent.