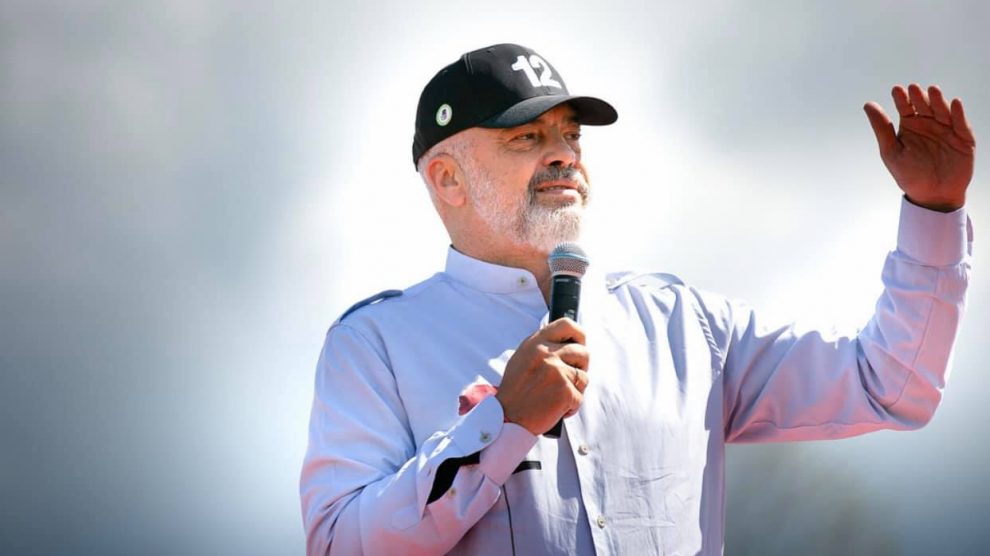 Albanian Prime Minister Edi Rama is set to win a record third term in office after his Socialist party took around 50 per cent of the vote in a parliamentary election.

The Albanian Socialist party of prime minister Edi Rama appears to have secured the 71 seats in parliament it needs to secure a new term in office.

In a parliamentary election held on April 25, the Socialists took around 50 per cent of the vote, comfortably ahead of the Democratic party on 39 per cent. The margin of victory was wider than most opinion polls had predicted.

The Socialist Integration Movement – which has said it will form a government with the Democrats should the chance arise – came in a distant third with seven per cent of the vote. The Social Democrats, who favour a deal with Mr Rama, are even further behind with just two per cent, but are currently projected to get two seats in parliament, which could turn out to be crucial.

Turnout in the election was just under 46 per cent.

“The people spoke, now they deserve to be heard,” said Mr Rama, an artist who first came to prominence in the 1990s as mayor of Tirana, after the first wave of results were published on the morning of April 26.

Full results are expected on April 27.

The election campaign was fought in an often confrontational manner, which culminated in the murder last week of a Socialist party activist in the city of Elbasan – allegedly shot by a member of the Democratic party.

Albania’s president, Ilir Meta, ostensibly independent but an increasingly vocal opponent of Mr Rama, found himself embroiled in a spat with the US ambassador in Tirana, Yuri Kim, accusing her of interfering in the election.

President Meta – whose wife leads the Socialist Movement for Integration – claimed in a live television interview that Ambassador Kim had backed Mr Rama, calling on her to “stop supporting Rama, who is violating the election” and warning that Albanians would take up their “pitchforks” if Rama tried to manipulate the election results.

The US ambassador later slammed Meta’s remarks as “unacceptable”.

“These threats deserve condemnation. Those who incite violence will be held responsible for the results of their words and actions,” Ambassador Kim wrote on Twitter.

Pitchforks have so far been absent with most Albanians prepared to accept that Mr Rama has indeed won a new term in office. Many will now be waiting to see if the president fulfills his earlier promise of resigning if the ruling Socialists won.

Mr Rama meanwhile has the Covid-19 pandemic to deal with, and will be looking to boost the country’s vaccination drive. Albania, which has a population of just under three million, has so far jabbed just 400,000 people, around seven per cent of the population.

Albania is nevertheless one of few countries in Europe which has reopened to tourists from all countries without putting any anti-Covid-19 measures in place. Travelers visiting Albania this summer will not be required to show proof of a negative Covid-19 test nor a certificate of vaccination.

Making Albania a tourism “champion” was one of Mr Rama’s key election pledges, along with investment in infrastructure.

Last week, Albania opened its second international airport, at Kukes in the northeast of the country. The first passenger flight to land at the airport was an Air Albania service from the country’s capital, Tirana.

According to Albania’s transport minister, Belinda Balluku, international flights will commence on June 17, initially serving destinations in Germany, Switzerland and the UK.

Until now, Mother Theresa Airport in Tirana had been Albania’s only international airport.

Mr Rama will also be looking to speed up Albania’s EU integration, given that the prospect of full membership looks increasingly remote.

In March 2020, Brussels finally gave the green light for the opening of membership talks with Albania and North Macedonia, saying that both countries had done all that had been asked of them in order to create the conditions for talks to begin.

However, no date for the commencement of accession talks has yet been set.

In an interview with Euronews last week, Mr Rama said that as Albania awaits news from the EU, he would “continue to build a European Albania”.