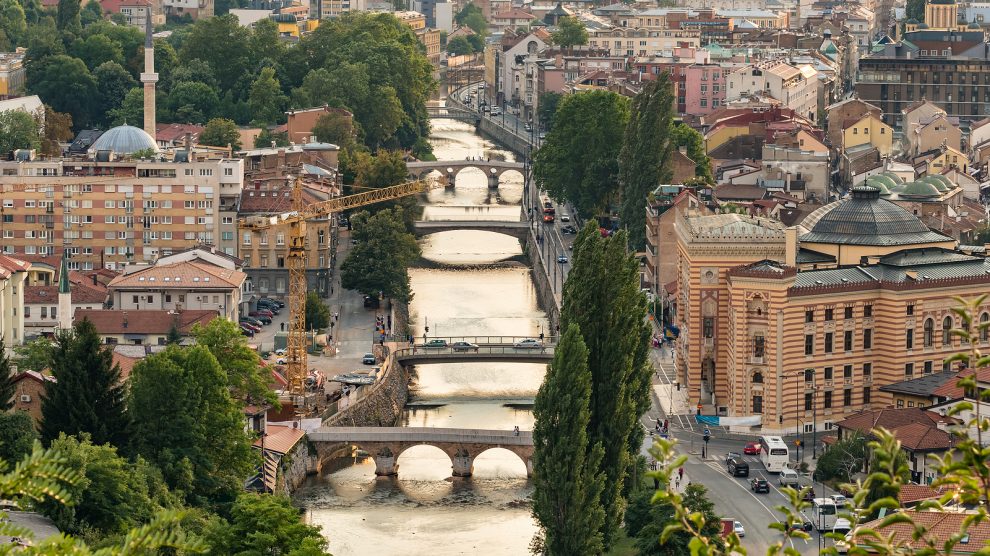 The complicated, unique and – some would say – dysfunctional – structure of the Bosnia and Herzegovina state makes fulfilling the EU’s pre-accession requirements impossible. Is the EU asking for too much?

Most of the countries of the Western Balkan are inching, slowly, toward EU membership.

For both Serbia and Montenegro accession talks are well underway, while Albania and North Macedonia were last year recognised as official candidates, even though Bulgaria is currently blocking North Macedonia’s attempts to open its first negotiation chapters in a row over the use of the Macedonian language, which Sofia claims is nothing more than a Bulgarian dialect.

For Bosnia and Herzegovina, however, things are rather different. The country is recognised only as a “potential candidate”, and its status shows no signs of changing anytime soon.

As such, many policy and regional experts are now asking the question: Is the European Union asking for too much from Bosnia and Herzegovina?

EU concerns primarily focus on the rule of law, but as the Bosnia and Herzegovina’s Council of Ministers Zoran Tegeltija noted in February, some countries (notably Bulgaria and Romania) had failed to meet the EU’s tough rule of law criteria by the time that they were admitted as members. It did not stop them becoming members: instead, a transitional arrangement was put in place to monitor progress. Both Bulgaria and Romania remain subject to what is known officially as the Cooperation and Verification Mechanism (CVM) 14 years on from becoming EU members.

Furthermore, Bosnia and Herzegovina is making some progress with its EU to-do list, not least when it comes to electoral integrity.

A successful municipal election last year in the city of Mostar – the first in 14 years – was welcomed by both European Commissioner Olivér Várhelyi and foreign policy chief Josep Borrell as a key step forward. A national programme for the adoption of the EU acquis – the body of common rights and obligations that binds all EU countries – is expected to be adopted soon.

And yet problems remain, which may explain the EU’s reluctance to take Bosnia and Herzegovina’s application for membership any further.

As many of these problems require constitutional changes – difficult in a country that is effectively split in two, the Bosnian-Croat Federation and the Republika Srpska – they risk delaying progress indefinitely.

These include the creation of a supreme court (Bosnia and Herzegovina currently doesn’t have one) and consistency of case law across the Bosnian-Croat Federation and the Republika Srpska. Bosnia and Herzegovina would also need to introduce a “substitution clause” which would allow the federal state, upon accession, to temporarily exercise the competences of other levels of government to prevent breeches of EU law.

As Nedim Hogić, a Bosnian lawyer, explained recently on the BiEPAG (Balkans in Europe Policy Advisory Group) blog, there is disagreement between Bosnia and Herzegovina’s Serb, Croat, and Bosniak political parties on how to approach these changes that the European Commission deems essential.

Parties from the Serb-dominated Republika Srpska are unwilling to support the creation of any new body at federal state level, citing their preference for the existing constitutional solutions provided by the 1995 Dayton Agreement. Meanwhile, on the issue of electoral law, Croat parties want to preserve the direct election of a Croat member of the country’s tripartite presidency by establishing an electoral unit with a majority Croat population. Bosniak parties view this as an attempt to solidify existing ethnic divisions, according to Mr Hogić.

The gridlock – which stems from Bosnia and Herzegovina’s unusual, and many would say, dysfunctional, federal structure in which sovereignty lies with the three “constitutional peoples” — the Bosniak, Croats, and Serbs – is unlikely to be broken as long as the country’s voters continue to cast their ballots on ethnic lines.

“At state level Bosnia and Herzegovina is simply not politically efficient. The specific organisation of the state requires that political energy, reforms, measures, be realised at lower levels of government,” Admir Čavalić, an economic analyst tells Emerging Europe. “Any reform process in Bosnia and Herzegovina is terribly slow, and so is judicial reform. These reforms are politically, but also institutionally, blocked.”

Time for the EU to change tactics?

With the structure of Bosnia and Herzegovina unlikely to change, some have called for the EU to change its tactics.

“By treating all the issues as being of equal importance and demanding substantial constitutional changes in exchange for candidacy status with an unclear perspective, the EU tries to achieve too much while offering too little, risking progress even on those issues that are not contested,” says Nedim Hogić.

Meanwhile, a group of six southern and eastern EU countries — Bulgaria, Croatia, Cyprus, Greece, Hungary, and Slovenia – have drafted a non-paper on Bosnia and Herzegovina ahead of the next meeting of EU foreign ministers.

According to the non-paper, the EU should also “firmly insist on achieving progress in all areas of concern, never lowering the bar and striking the right balance between conditionality and incentives”.

EU foreign ministers are expected to discuss Bosnia and Herzegovina, and the broader Western Balkans region, in April or May.

For now, Bosnia and Herzegovina’s path towards the EU remains as unclear as ever. It could be argued that as things currently stand, it simply doesn’t have one.