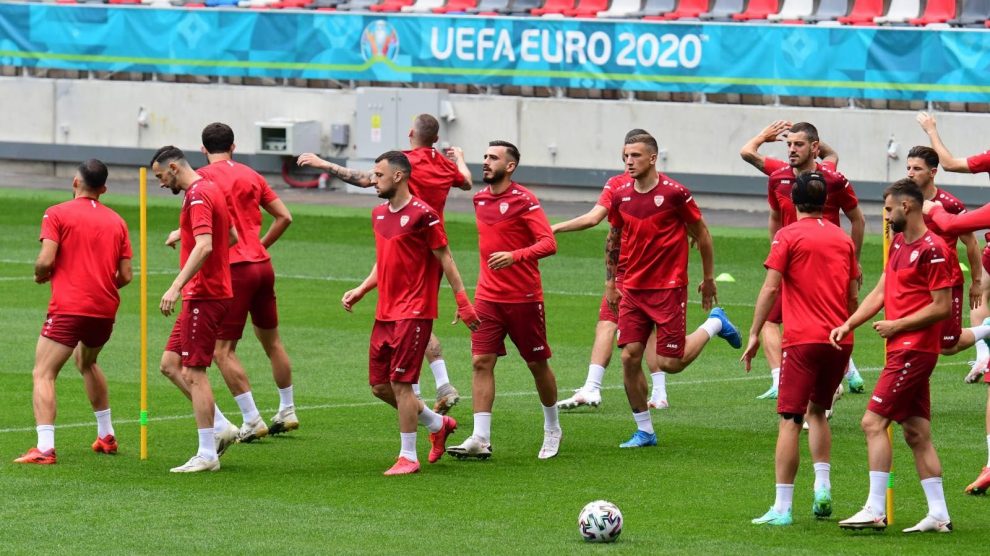 North Macedonia make their debut in a major international football tournament on Sunday, against Austria in the Romanian capital Bucharest.

There’s a major football tournament currently being held in Bucharest, the Romanian capital, but you’d not guess by walking around the city.

The failure of the Romanian national team to make the finals of Euro 2020 – delayed from last year due to the Covid-19 pandemic, and which kick-off on June 11 – has meant that for most locals in the city, football ended when with the close of the domestic season last month.

“The atmosphere certainly can’t be compared to when Bucharest hosted the Europa League final in 2012, or even when Chelsea played Atletico Madrid here earlier this year,” says Emanuel Roşu, a Romanian football journalist and author.

“Some parts of the media are trying to big it up, however, and I am sure that once the games begin there will be more interest.”

Like most stadiums hosting Euro 2020 matches – there are 11, in 11 different countries – Bucharest’s National Arena will – for the first two matches at least, be limited to just 25 per cent capacity, around 14,500. This could rise, however, as the tournament goes on, depending on the Covid-19 situation in each country.

‘We are here on merit’

One of the teams who will be playing in Bucharest is North Macedonia, making their debut in a major tournament.

And according to Vladko Arsov, a Macedonian commentator and sports anchor on MRTV, they are hopeful that they could spring a surprise or two.

“There was initially a feeling in the country that we made this tournament through the back door, via the Nations League play-offs and not the regular qualifying group, but ever since we beat Germany earlier this year there has been a more positive vibe, and we now believe that we are here on merit, that we earnt our place,” he says.

“We are now all on the same page, and people are excited. It’s just a shame that more fans can’t attend the games, it’s not that far from Skopje to Bucharest,” adds Arsov. But only 2,000 or so can go to Bucharest. In normal times, tens of thousands would have made the trip.”

North Macedonia play their first game on June 13, in Bucharest against Austria.

“Our problem will be scoring goals,” admits Arsov, who nevertheless points to Elif Elmas, a midfielder with Napoli in Italy, as a potential star.

“He has been limited to just a few games with Napoli this season, but he certainly comes to the tournament fresh and could be one to watch.”

For Poland, who along with Ukraine are probably one of the most fancied teams from the emerging Europe region, the aim will be to at least repeat their performance of Euro 2016, when they made the quarter-finals.

“Poland’s problem is the opposite to North Macedonia,” says Chris Lash, presenter of the Right Bank Warsaw podcast. “They have [Robert] Lewandowski, the best player in the world, but they need to find a way to get the ball to him.”

Lash also suggests that Poland’s schedule could be a possible handicap. The Poles play their first game in St Petersburg, Russia, before flying to Seville in Spain and then back to Russia for the third game.

“It’s unfair,” he says. “They were initially meant to be playing in Dublin, which would have been like a home match for Poland given how many Poles live in Ireland. But Dublin was unable to guarantee that fans would be allowed to attend. It’s a mess.”

Emanuel Roşu, Vladko Arsov and Chris Lash were talking to Emerging Europe editor Craig Turp-Balazs during #LiveonEE, the first in a series of regular chats covering a range of topics related to the emerging Europe region.

You can watch the full chat below.