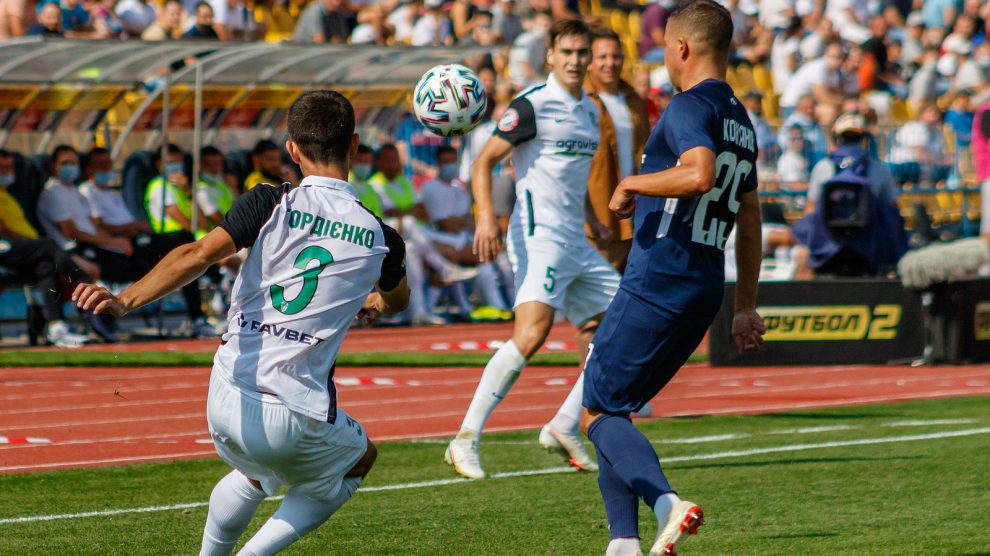 Ukrainian football has a glorious past and considerable pedigree, but its domestic league is in trouble.

When Andriy Shevchenko won the Champions League with Milan in 2003, he asked the club’s then owner, Silvio Berlusconi, if he could borrow the enormous trophy for a few days in order to fulfil a promise.

The former Italian prime minister, always willing to indulge his most valuable player, agreed. Shevchenko set off immediately for Kyiv, where he fulfilled his promise: to present the trophy to a statue of his mentor, Valery Lobanovsky, which stands outside the entrance to Dynamo stadium in the Ukrainian capital.

Lobanovsky, one of the most influential coaches in the history of the game, had died the previous year. While coach of Dynamo in the 1970s and 1980s he created, along with Anatoly Zelentsov, a professor at Kyiv’s Institute of Physical Culture, modern sport science and performance analytics.

The approach was successful: Dynamo Kyiv won the European Cup Winners’s Cup twice, in 1975 and 1986, as well as the European Super Cup in 1975.

For much of the 1980s, Ukrainian football was almost one and the same as Soviet football. Teams from the republic won six of the ten Soviet Top League titles between 1980-89 (Dynamo four, Dnipro two). In 1988, the USSR national team – coached by Lobanovsky and made up almost entirely of Ukrainian players – reached the final of the European Championships.

When the USSR national team was dissolved, along with the country it once represented, its all-time leading scorer was Blokhin. Another Ukrainian, Oleg Protasov, was second. Five of the 10 most capped Soviet players are Ukrainians (Blokhin, again, heads the list).

Throughout the first decade and a half of independence, Ukrainian football more than held its own. The generation of players who began their careers post-independence – the likes of Oleg Luzhny, Anatoliy Tymoschuk, Serhiy Rebrov, and Shevchenko of course – are still some of the finest footballers Ukraine has ever produced.

This generation qualified Ukraine for its first (and to date only) World Cup in 2006. There, they reached the quarter-finals, beaten by the eventual champions, Italy.

Shakhtar won the league in eight of the next 10 seasons, all with Lucescu at the helm.

Fernandinho, Willian, Douglas Costa, Bernard and Fred – all Brazilians currently playing for top clubs in England and Germany – first made their name in Ukraine with Shakhtar.

This period of improvement culminated in Shakhtar winning the UEFA Cup (now the Europa League) in 2009, the combination of Ukrainian grit and Brazilian flair proving too much for German side Werder Bremen 2-1. Dynamo Kyiv had also reached the semi-finals of the competition the same year.

The league the war destroyed

However, all this progress fell apart in 2014, when Ukraine was plunged into war against Russia-backed separatists in the Donbas, of which Donetsk is a part.

The economic situation deteriorated and club owners bailed on their investments. At some teams, players went weeks and even months without getting paid. Several clubs, including perennial champions Shakhtar were uprooted from their home cities, which fell under separatist control.

At least 20 professional clubs have either ceased to exist or been severely sanctioned since the start of the conflict. This includes heavyweights like Metalurh Zaporozhie, and Europa League regulars Metalist Kharkiv and Dnipro Dnipropetrovsk.

The latter was a particularly tragic case: owned by oligarch Ihor Kolomoyskiy, Dnipro had reached the Europa League final in 2015, narrowly losing to Sevilla. By October 2016, Kolomoyskiy had stopped funding the club. The players and coaching staff weren’t paid – in punishment, the Football Federation of Ukraine docked nine points from the team, which was relegated at the end of the season.

In 2018, FIFA made the decision to relegate Dnipro again due to the debts accrued by the owner. This time, they were relegated to the bottom of Ukraine’s football pyramid, in one of the regional amateur divisions.

As a result of all these clubs being dissolved, the number of teams competing in the Ukrainian Premier League dwindled, from 16 in 2014 to 14 in 2015 to just 12 between 2016 and 2020. However, the current season has seen this number return to 14, with the Ukrainian Football Federation targeting a return to a 16 team competition by next season.

“High-quality foreign players have stopped coming because of the financial situation,” says Roman, a 33-year-old Dynamo Kyiv fan attending a cup match against Kolos Kovalivka, “and even when the league was stronger, owners were not interested in developing youth players. They wanted instant results. So when the financial crisis hit, we didn’t have the infrastructure in place to counteract the losses.”

Attendances have also fallen drastically – prior to the Covid-19 quarantine, during the 2019-2020 season, Ukrainian league matches had an average attendance of just 3,000, down from nearly 13,000 at the start of the decade. One explanation for this is the fact that some of the biggest cities in Ukraine – Odesa, Kharkiv, Kryviy Rih and Mykolaiv – no longer have representation in the top league.

This is exacerbated by the fact that the Donetsk and Luhansk-based clubs, such as Shakhtar, Zorya and Olimpik, can’t play in their home cities. Tavriya and FC Sevastopol can’t compete in the Ukrainian football pyramid at all, owing to the ongoing Russian occupation of Crimea.

For Roman, the sharp decline in attendances is also symptomatic of the lack of quality in the league since 2014.

“Like look at this game,” Roman says, referencing the cup tie we were attending. “It’s half time and I can’t recall there being a single shot on target. And this is one of the top teams playing at home.”

However, others believe that the decline of the Ukrainian Premier League has paradoxically boosted the national team.

“Now, clubs are forced to develop their youth players because they don’t have enough money to buy foreigners,” says Taras, a 27-year-old Dynamo Kyiv fan. “This is good for the national team. Some of these young players who are playing well now – like [Vitaliy] Mykolenko, [Viktor] Tsyhankov, [Volodymyr} Shepelev – I don’t think they would have had this many opportunities to play ten years ago. Or look at [Illia] Zabarniy – he’s what, 18 and is already getting Champions League experience.”

In 2019, the Ukrainian under-20 team won the FIFA U-20 World Cup, with some promising youngsters in the team. Increasing numbers of Ukrainian footballers are making their way abroad, including Manchester City’s Oleksandr Zinchenko and Atalanta’s duo of Ruslan Malinovskiy and Viktor Kovalenko.

Furthermore, with Ukrainian clubs less financially secure, there is a greater incentive to sell their players abroad. Before, this was not the case, and the careers of many players suffered as a result. Andriy Yarmolenko, for example, was one of Ukraine’s brightest young talents in the early 2010s, but was repeatedly denied a move to a more competitive European League. When he finally got his big break in 2017, he was already 28 in decline.

“It’s better for the national team to have players at average teams in strong leagues than at strong teams in the Ukrainian league,” says Roman.

Since the appointment of Shevchenko as head coach of the national team, Ukraine has won over half of its games. In late 2019, Ukraine beat Portugal 2-1 to qualify for Euro 2020, ahead of the reigning champions. There may be some merit to the notion that the decline of the league correlates to the ascendancy of the national side.

Furthermore, the financial decline could incentivise clubs to move to more self-sufficient models. Since independence, Ukrainian football, like so many other facets of life, was dominated by oligarchs – Akhmetov at Shakhtar, Kolomoyskiy at Dnipro, Ihor Surkis at Dynamo. This dependence is what put the clubs in such a precarious position when their patrons pulled out, and what led to the demise of Metalist Kharkiv and Dnipro Dnipropetrovsk.

De-oligarchising Ukrainian football and putting greater emphasis on youth development can only have positive long-term effects, both for the Ukrainian league and for the national team. Small countries like Belgium and Portugal manage to consistently produce top talent because of the highly-developed youth footballing infrastructure – there is no reason why Ukraine, which has double the population of the two countries combined could not do the same, and once again become a football powerhouse.

This coming week will offer a few clues as to the current status of the league in an international setting: both Dynamo (now coached, ironically, by Mircea Lucescu) and Shakhtar play in the last-16 of the Europa League.

Dynamo against Villareal of Spain, and Shakhtar against Roma.