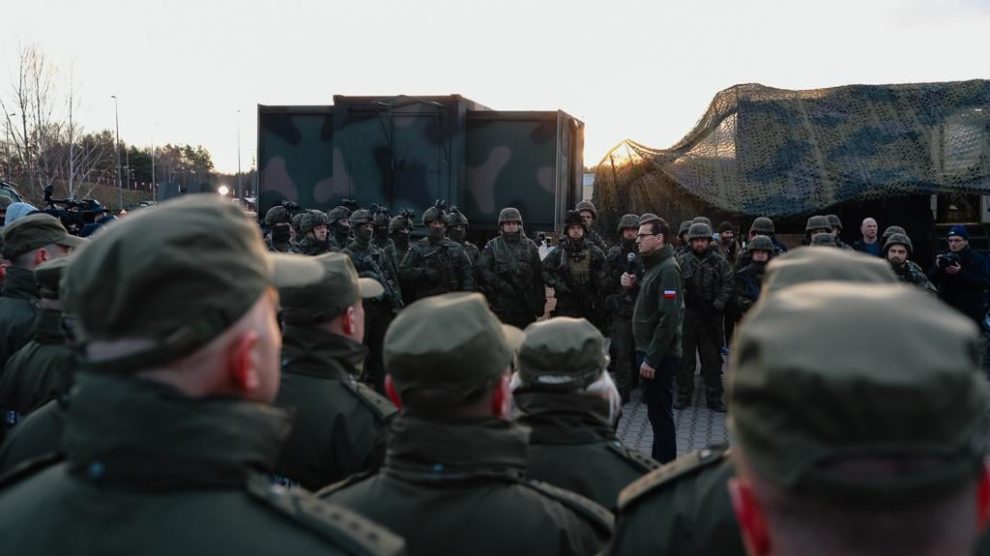 A humanitarian disaster looks increasingly likely on the EU’s border with Belarus.

Several thousand people are currently stuck at the border between Belarus and Poland with the government in Warsaw now warning of a possible “armed” escalation of the ongoing tension between the two countries.

“We are dealing with the organised destruction of border fortifications. There are also direct attacks on Polish border guards officers, police and soldiers,” said the Polish government in a statement.

For months, the Belarusian regime of Alexander Lukashenko has been facilitating the movement of migrants – primarily from Afghanistan, Syria and Iraq – to its western borders, with Poland and other EU countries accusing Minsk of trying to provoke a new refugee crisis in Europe.

Poland’s Border Force says that it has recorded more than 30,000 attempts to cross the border since August, including 17,300 in October alone. Officials in Berlin say almost 7,000 of those people have tried to enter Germany.

The EU says that the “hybrid attack” is a response to sanctions imposed on the Lukashenko regime since the dictator began a crackdown against opponents and civil society following a disputed presidential election in August 2020, which Lukashenko claims to have won with an implausible 80 per cent of the vote, but by any objective measure lost to Svetlana Tikhanovskaya, who has since been forced into exile in neighbouring Lithuania.

Tikhanovskaya held an emergency call on November 8 with Poland’s president, Andrzej Duda, to discuss the situation on the border and possible solutions to it.

“Our positions are the same,” she said. “This is a deliberate escalation by the regime and the EU should respond strongly. We can’t let the dictator escalate violence.”

Polish Government Spokesperson Piotr Muller meanwhile said around 3,000 to 4,000 migrants were currently gathering near the border.

“We expect that there may be an escalation of this type of action on the Polish border in the near future, which will be of an armed nature,” he warned, blaming “people linked to Belarusian special services” for organising the attempt to breach the border.

With new columns of migrants continuing to arrive at the border, European Commission President Ursula von der Leyen on November 9 called on Lukashenko to “stop putting people’s lives at risk”.

“The instrumentalisation of migrants for political purposes by Belarus is unacceptable,” said von der Leyen in a statement.

“The Belarusian authorities must understand that pressuring the European Union in this way through a cynical instrumentalisation of migrants will not help them succeed in their purposes.”

Von der Leyen said that she had spoken to Polish Prime Minister Mateusz Morawiecki, Lithuanian Prime Minister Ingrida Šimonytė and Latvian Prime Minister Arturs Krišjānis Kariņš to express the EU’s solidarity and discuss with them the measures the EU can take to support them in their efforts to deal with this crisis, and called on all member states to approve a new raft of sanctions against Lukashenko.

Commission Vice President Margaritis Schinas is set to travel in the coming days to the main countries of origin of the migrants and the Poland-Belarus border to ensure that they act to prevent their own nationals from falling into what the EU says is “a trap” set by the Belarusian authorities.

The EU will also explore how to sanction, including through blacklisting, third country airlines that are active in human trafficking.

Morawiecki visited the border on the morning of November 9 to meet some of the 12,000 troops who have been sent to respond to the increased number of migrants. The Bruzhi-Kuźnica border crossing, where the majority of migrants have gathered, has been closed to all traffic.

Poland has also imposed a state of emergency at the border, making reporting difficult, while the country’s parliament has approved the construction of a border wall costing almost 400 million euros.

Poland has been criticised for not engaging with Frontex, the European Union’s border force, and for returning migrants who manage to make it across the border, a practice known as pushback. Ten migrants have died on the border since the summer.

Covid-19 is threatening CEE’s gender equality gains
‘No contest’ election over, it’s time for Uzbekistan to speed up reform
Comment