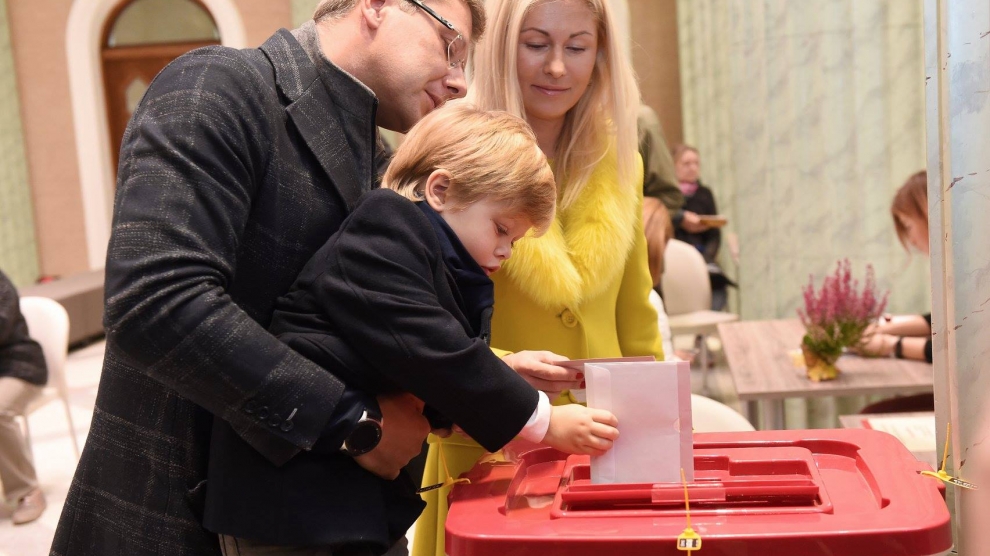 An openly pro-Russia party allied to Vladimir Putin’s United Russia has won the most votes in Latvia’s general election, held on October 6.

The Harmony party, which takes almost all of its support from Latvia’s numerous Russian-speaking minority, took 19.9 per cent of the vote, and will have the first opportunity to try and form a government.

“The only possible stable coalition includes Harmony,” said the party’s leader and mayor of Riga Nils Ušakovs, pictured above voting with his family. “Any other coalition would have to bring together xenophobes with gay rights activists, and would last about two weeks.”

Prime Minister Maris Kucinskis’s governing coalition comprising the Union of Greens and Farmers, the National Alliance and the Unity party only won about 27 per cent of the vote between the three of them, the same as two populist parties, KPV LV and the New Conservatives, who also won 27 per cent between them. Both the KPV and New Conservatives are seen as potential coalition partners for Harmony.

“KPV LV can work with anybody, we don’t have any red lines regarding any other political force,” said the party’s candidate for prime minister, lawyer Aldis Gobzems.

The pro-EU For Development Party took a disappointing 12 per cent of the vote.

Support for the ruling coalition was hit by widespread public dissatisfaction with its fight against corruption and money-laundering – both key campaign issues. In February Latvia’s third-largest lender, ABLV Bank, collapsed after US authorities accused it of “a wide array of illicit conduct,” linked to North Korea’s weapons programme and corruption in Russia and Ukraine. And in June, prosecutors charged the central bank governor Ilmars Rimsevics with bribery.

In August, the Council of Europe’s Group of States Against Corruption (GRECO) called on Latvia to reinvigorate the fight against corruption, and boost integrity in top executive functions.

Coalition talks are expected to last for several weeks.