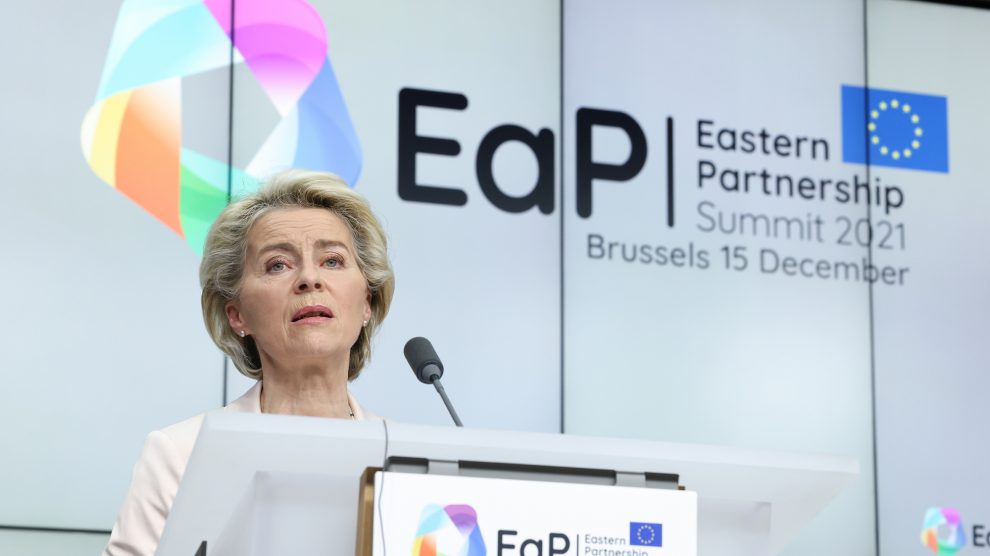 Three topics: Belarus, Russia, and Covid-19 dominated the EU’s Eastern Partnership summit in Brussels. But only two made it to the joint declaration released at the summit’s close.

There was, somewhat surprisingly, not a single mention of Russia in a joint declaration made by the heads of state and government of the European Union and five members of its Eastern Partnership following a summit in Brussels on December 15.

This despite European Commission President Ursula von der Leyen admitting in a press conference that Russia’s build-up of military forces on its border with Ukraine – an Eastern Partnership member – had been one of the three main topics of discussion, along with Belarus – which suspended its participation in the partnership earlier this year – and co-operation, particularly in the fight against Covid-19.

“We are calling on Russia to de-escalate and refrain from any further aggressive acts,” said von der Leyen. “We assured Ukraine of our steadfast support and commitment to its sovereignty and to its territorial integrity. And there should indeed be no doubt: the European Union will respond firmly to any further aggression against Ukraine.”

However, the joint declaration made no direct mention of Russia, instead saying: “We remain deeply concerned about the continuous destabilisation and violations of the principles of international law in many parts of the Eastern Partnership region that pose a threat to peace, security and stability.

“We call for renewed efforts to promote the peaceful settlement of unresolved conflicts in the Eastern Partnership region based on the principles and norms of international law. The peaceful resolution of conflicts, building trust and good neighbourly relations are essential to economic and social development and cooperation.”

On Belarus, von der Leyen added that she hoped the “empty chair in the room” would soon be filled by a “legitimate, democratically-elected Belarusian leader”.

“We all know that the Belarusian regime represses its own people; it instrumentalises migrants, putting their lives at risk; and it is launching in parallel a hybrid attack against the European Union.

“It was good to see a consensus among us – the 27 member states and the five eastern partners. We unanimously condemn [President Alexander] Lukashenko’s behaviour. And we all stand with the Belarusian people.”

The previous day, a court in Minsk had sentenced several key members of the Belarusian opposition, including Sergei Tikhanovsky, the husband of opposition leader Svetlana Tikhanovskaya, to long prison sentences.

Von der Leyen also highlighted the potential of the EU’s new Global Gateway initiative for the development of infrastructure, widely viewed as an alternative to China’s Belt and Road initiative, which she could trigger 17 billion euros of investments for the eastern partners.

“There are very interesting, impressive projects in the pipeline, for example making buildings in Moldova more energy-efficient, or to expanding high-speed internet to rural Georgia, or to rolling out fibre optic cable under the Black Sea,” she said, adding, “we invite our eastern partners to get on board and to work with us on building new links in the shared region.”