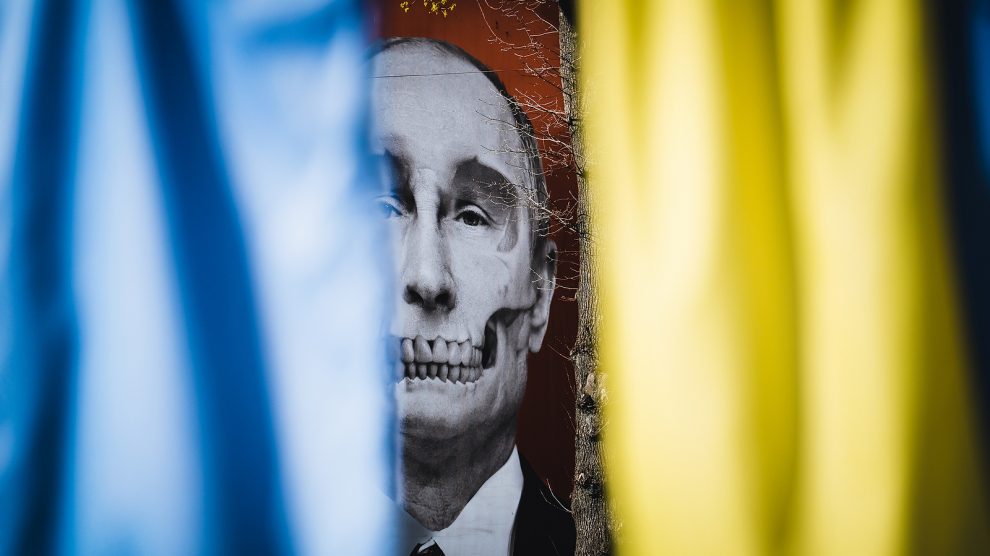 ‘If Putin wanted peace, he would take his soldiers home, and the war would be over. But apparently, he wants to continue the war after a short break.’

Easter in Ukraine – the holiest period of the Orthodox Christian calendar – was last year marred by Russia’s brutal war. On Easter Saturday, a Russian cruise missile killed eight civilians in the Black Sea port of Odesa, among them three generations of one family: a three-month-old baby girl, her mother, her grandmother.

Making his feelings towards the aggressor clear, Metropolitan Epiphanius, the head of the Orthodox Church of Ukraine, said that, “there is nothing sacred for the Russian murderers”, condemning Vladimir Putin for refusing to declare a three-day ceasefire over the Easter period.

Last month, shortly before Christmas, Ukrainian President Volodymyr Zelensky told G7 leaders that he was ready to offer Moscow an “opportunity to take a real, meaningful step towards a diplomatic settlement” of the ongoing conflict in his country.

“The holidays are ahead, celebrated by billions of people around the world,” Zelensky said. “This is the time when normal people think about peace, not about aggression. I offer Russia the opportunity to at least try to demonstrate that they can abandon the way of aggression. If Russia withdraws its troops from Ukraine, it will ensure a lasting cessation of hostilities.”

As a consequence, Russia continued to terrorise the Ukrainian population with complete disregard for the holiday period. At least 10 people were killed and 55 were injured in the southern city of Kherson after Russian shelling hit the area on Christmas Eve. Then, less than an hour into the new year, a fresh round of shelling targeted the Ukrainian capital Kyiv, although the city’s air defences prevented casualties.

‘The war ends when your soldiers leave’

Putin’s offer this week of a 36-hour “ceasefire” – to mark Christmas as observed by Russia, on January 6 and 7 – has therefore understandably met with short shrift in Kyiv, not least as for many Ukrainians, Christmas has been and gone.

The Orthodox Church of Ukraine this winter allowed its congregations – for the first time – to celebrate Christmas on December 25 according to the western, Gregorian calendar. For centuries Ukrainians celebrated Christmas along with Russia, on January 7. The change was a subtle, yet decisive shift towards the West.

Zelensky, commenting on Putin’s offer during his evening address on January 5, said Putin’s ceasefire offer was a trick designed to halt the progress of Ukraine’s forces in the eastern Donbas region, which would allow Russia to bring in more reinforcements.

“They now want to use Christmas as a cover, albeit briefly, to stop the advances of our boys in Donbas and bring equipment, ammunitions and mobilised troops closer to our positions,” Zelensky said. “What will that give them? Only yet another increase in their total losses.”

Zelensky, who made a point of speaking in Russian and not Ukrainian, said that ending the war meant “ending your country’s aggression. The war will end either when your soldiers leave or we throw them out”.

The initial call for a ceasefire came earlier on January 5 from Patriarch Kirill, the head of the Russian Orthodox Church, who asked for a halt to hostilities to allow the faithful to attend church on both Christmas Eve and Christmas Day.

Kirill is a staunch ally of Putin who has supported the invasion since the very beginning. Last year he gifted an Orthodox icon to the head of the Russian National Guard, Viktor Zolotov, in order to “inspire young soldiers” who are “on the path to defending the Fatherland”.

That the unholy Kirill, and – indeed – Putin, have suddenly been possessed by Christmas cheer and Christian goodwill is nonsensical, and reeks of both cynicism and opportunism. The ceasefire call does, however, allow them to play the “good Christian” card at home. The call for a truce can also be used to demonise Ukraine.

Kyiv’s allies have seen through the cynicism, however. US President Joe Biden said the call for a ceasefire was Putin’s way of “trying to find some oxygen”.

German Foreign Minister Annalena Baerbock said that Russia’s promise of a ceasefire would not bring “either freedom or security” to the people living in fear of Moscow’s brutal atacks. “If Putin wanted peace, he would take his soldiers home, and the war would be over. But apparently, he wants to continue the war after a short break,” she said.