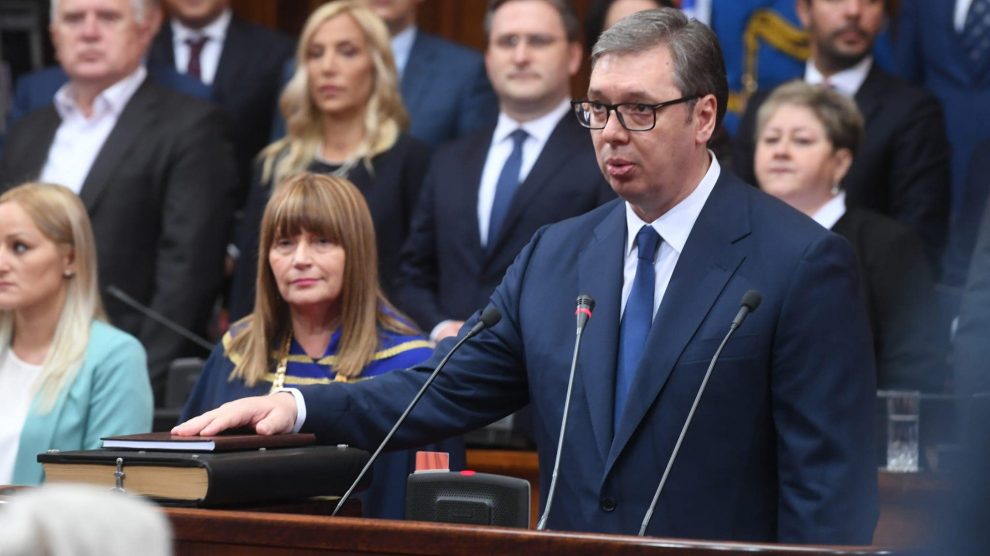 Just days after agreeing a major new gas deal with Russia, Serbia’s president hints that the country might finally impose sanctions on Moscow – if its European partners help it weather the economic fall out.

If a speech by Serbia’s president Aleksandar Vučić on May 31 is anything to go by, Belgrade’s delicate balancing act between East and West is likely to continue for the foreseeable future.

Speaking to Serbia’s parliament as he was sworn in for a second term after victory in a presidential election in April, Vučić pledged to keep the country on its path towards European Union membership, saying that it would be a “priority”.

He called on the country’s next government – which will be led by his Serbian Progressive party and is likely to take office next month – to “work harder” to achieve EU membership, and even suggested that Serbia could join international sanctions against Russia, although he was careful not to mention Russia by name.

“Forming a new government is of utmost importance because of the situation we are in, a difficult situation,” said Vučić. “We will have to deal with the issue of sanctions, which could damage our economy. We will have to ask our European partners for help.”

Serbia remains one of few European countries that has not imposed sanctions against Russia, although it has voted in favour of three United Nations resolutions condemning the invasion of Ukraine.

At the weekend, Vučić agreed a new three-year gas supply contract with Russia in a phone call with Vladimir Putin.

Vučić said that the deal had been secured on “extremely favourable” terms, and is likely to be signed during a visit by Russian Foreign Minister Sergey Lavrov to Belgrade in early June.

Serbia is almost entirely dependent on Russian gas, and its main energy companies are under Russian majority ownership.

Nevertheless, in his speech to parliament Vučić hinted at a shift away from Russia, saying that while militarily Serbia would remain neutral and not seek NATO membership, “politically we are not neutral, because we want membership of the European Union”.

Vučić called the invasion of Ukraine a turning point in international relations, but – somewhat predictably – drew comparisons with NATO’s bombing of Serbia in 1999.

“With such an attack,” he said, “international law was stepped on, but that happened dozens of times in the contemporary world, and the main protagonists were Western forces, those who fight today for the respect of international law.

“We in Serbia can confirm this in the best way, because Serbia was attacked in 1999, without a UN mandate.”

No EU without movement on Kosovo

Countries wanting to join the EU must bring their laws and regulations into line with the bloc’s standards, achieved by negotiations in 35 policy chapters, ranging from the free movement of workers to taxation and agricultural and economic policy.

Belgrade has now opened 22 negotiating chapters since its membership talks began in 2014. Two have been provisionally closed.

Serbia’s path to the EU however will remain blocked unless it can end its dispute with Kosovo.

Kosovo declared independence from Serbia in 2008, but Belgrade refuses to recognise its former province as an independent state.

Relations between the two countries are currently at their lowest ebb since the start of EU-brokered negotiations in 2011.

In his swearing-in speech, Vučić made little reference to Kosovo, except to say that he would “preserve the sovereignty” of the “whole” territory of Serbia, “including Kosovo and Metohija as an integral part”.