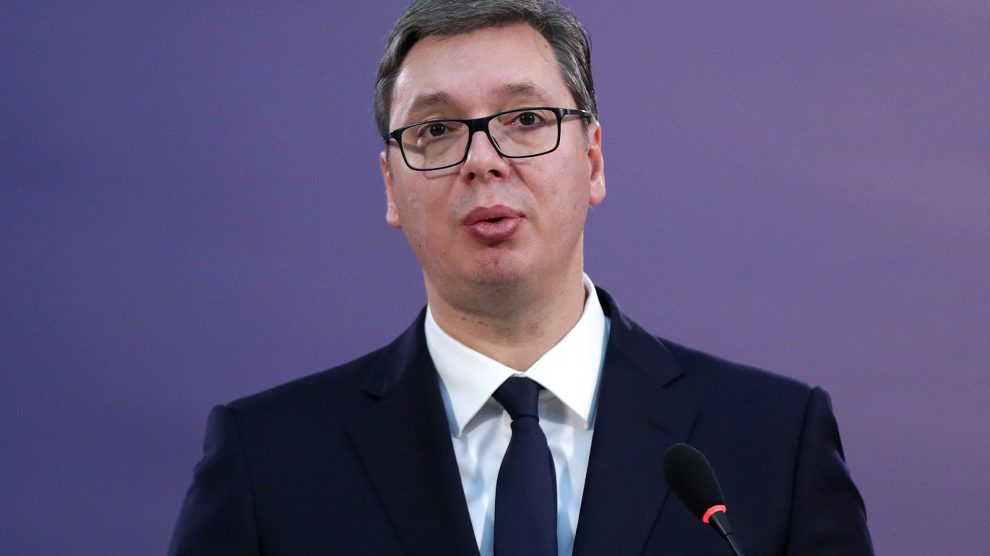 Belgrade is set to hold both parliamentary and presidential elections on April 3, with little change expected in either the presidency or the National Assembly. However, once the election is out of the way, Serbia might finally take firmer stance on Russia’s invasion of Ukraine.

The Serbian Progressive party (SNS) has been the largest party in Serbia’s ruling coalitions since 2012, while its leader Aleksandar Vučić has held the country’s presidency since 2017.

The current SNS-led coalition received 60.65 per cent of the vote in a parliamentary election in 2020, and currently holds 188 of the 250 seats in parliament, allowing it to rule almost unopposed.

Its main opposition is a coalition lead by the Socialist party of Serbia (SPS), which received 10.38 per cent of votes in the previous election and holds 32 seats, followed by the Serbian Patriotic Alliance (which has 11 seats), and the Alliance of Vojvodina Hungarians on nine seats.

Serbia holds an early parliamentary election on April 3 (Vučić is up for re-election as president on the same day), and the results would appear to be a foregone conclusion: another decisive victory for the SNS.

“Exploiting its full control over politics, economy, and the media, the SNS and Aleksandar Vučić as its leader will certainly preserve their position as the dominant political force in Serbia,” Petr Čermák, Western Balkans affairs researcher at the Charles University in Prague, tells Emerging Europe.

Engjellushe Morina, Western Balkans expert and senior policy fellow at the European Council on Foreign Relations, also believes that the SNS will maintain its position of power.

“However, whether or not they will continue ruling through the same coalition – that is hard to tell,” she says.

Currently, the SNS rules with the Together We Can Do Everything coalition, which has since 2020 also included the centre-right Serbian Renewal Movement (SPO), Serbian People’s party (SNP), Strength of Serbia Movement (PSS), and People’s Peasant party (NSS), as well as the Movement of Socialists (PS) which leans more to the left.

“The SNS is a party that only functions based on being in power and led by Vučić. It lacks a clear ideological orientation or popular figures besides Vučić. As a result, it has largely become his vehicle as a clientelist party for remaining in power,” Florian Bieber, director of the Centre for Southeast European Studies at the University of Graz, tells Emerging Europe.

“As with elsewhere in this region, the public sector is the main job provider in Serbia and these positions are much more likely to be filled by supporters of the ruling party. The people who received these positions will want to remain loyal,” adds Morina, further revealing the significance of clientelism in determining the election outcome.

The invasion of Ukraine

The Russian invasion of Ukraine is just as much of a hot topic in Serbia as elsewhere in Europe, and public perceptions of the ongoing conflict will without a doubt influence the vote.

Bieber suggests that it is no secret that, “Vučić’s policy of maintaining good ties with [both] Russia and the EU has become more difficult in recent weeks.”

However, for his domestic audience, this is likely to be a winning strategy.

“Balancing between various foreign policy vectors is a card Vučić has been playing quite successfully over the last decade and the current (international) pressure on Serbia allows him to use it to overshadow domestic problems,” says Petr Čermák.

“The current international crisis provides an important advantage to him, as he is seizing even more media attention – presenting himself as a statesman who is taking difficult historical decisions on behalf of the nation in regard to the country’s geopolitical orientation,” he continues.

A poll by the European Council on Foreign Relations from August 2021 revealed that 54 per cent of Serbian citizens perceive Russia as an ally, while 95 per cent see it as either an ally or a necessary partner. Only 11 per cent cited the European Union as an ally.

Belgrade has to clarify its stance

More optimistically, a landslide win for SNS could make it easier for the party to position the country, which enjoys high levels of economic integration with the EU, more ideologically closer to the bloc.

Bieber argues that the ruling party’s current approach will become more difficult to maintain after the elections and if the war continues.

“Already the public rhetoric of the government has not been pro-Russian, but a mixture of messages, centring on the notion of stability and Serbia trying to avoid getting dragged into the conflict and cushioning any economic costs,” he says.

On this basis, he makes the argument that it is possible to imagine that Serbia might gradually shift to a more critical position towards Russia.

“After all, Serbia has cultivated close ties with China in recent years, which can compensate in case relations with Russia worsen — both in terms of support for Serbia in the UN Security Council regarding Kosovo and in terms of economic cooperation,” Bieber outlines.

“SNS wants to keep the pro-Russia vote close to home, but there is some chance that we could see Serbia break ranks with Russia and align properly with the EU after the election. I don’t think this would happen immediately, but slowly,” says Morina.

“Vučić is treading very carefully to prevent further tensions and instability in the county, but this is the direction in which he is headed,” she adds.

According to Morina, to make this outcome more likely, the EU will need to apply pressure to the newly formed government.

“It is far too obvious now that appeasing autocrats, especially in the Western Balkans, is not going to work. This is working against the whole European political philosophy and the integration of the region,” Morina points out.

“Anything else would be quite the grim decision to me and it will lead to the isolation of the country. It will be very costly,” she concludes.