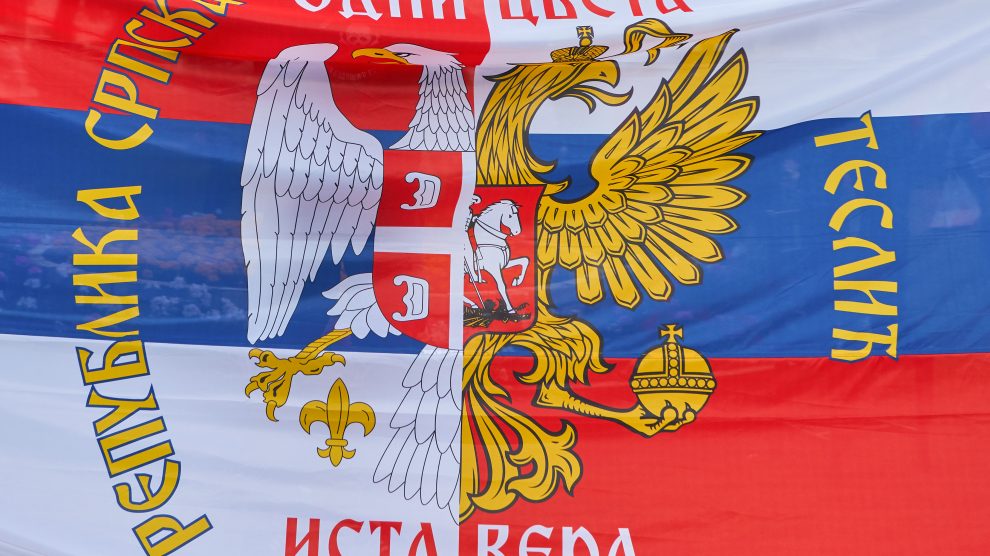 Many Serbs have not been shy to show their support for Russia’s invasion of Ukraine, both in Serbia itself and in the Republika Srpska region of neighbouring Bosnia and Herzegovina. Should Sarajevo be worried?

For the second time since Russia’s invasion of Ukraine began on February 24, there was a loud show of support for Russia on the streets of the Serb capital Belgrade this past weekend. Demonstrators waved the Serbian and Russian flags, and paraded the now infamous Z that has become a symbol of the invasion.

Serbia is not the only country in Europe where openly pro-Russian demonstrations have been held.

Similar marches in support of Russia have also been seen on the streets of towns in neighbouring Bosnia, in the Republika Srpska region where Serbians make up close to 83 per cent of the population.

Hundreds gathered in Banja Luka, Republika Srpska’s largest city, on Saturday to show their support for what the organisers referred to as Moscow’s efforts to liberate Ukraine’s “subjugated” people – an eerie statement considering that subjugated is precisely how many ethnic Serbs perceive their status in Bosnia.

“Unlike other parts of Europe, the war in Ukraine has strong polarising effects in the Balkans,” Asya Metodieva, a researcher at the Institute of International Relations Prague tells Emerging Europe.

“This is evident from the intensified disinformation campaign launched by Russia-friendly outlets across the region – discussions between Russophobes and Russophiles are more present on local media, as such ‘alternative’ worldviews have always been present among local populations and political elites,” she explains.

Such attitudes are particularly obvious amongst a notable percentage of Balkan Orthodox Christians who see Russia as a cultural ally.

Meanwhile, due to geographical distance and a lack of historical experience with direct Russian Imperial or Soviet aggression, few in the Balkans would consider Russia to be a threat in the way that other Orthodox populations in Eastern Europe and the Caucasus do.

“Russian embassies are particularly active in posting misleading information in addition to manipulative statements against the West,” adds Metodieva.

In Bulgaria, the Russian embassy was asked for an apology by Prime Minister Kiril Petkov after releasing a statement on March 3 comparing Russia’s invasion of Ukraine to the Russo-Turkish war of 1877 and 1878, which played a role in Bulgaria’s liberation from the Ottoman Empire.

While such incidents, alongside the horrific images of the war in Ukraine, have resulted in a rapid fall in support for Russia amongst the region’s Orthodox population, Serbia remains a notable exception.

“The key reason behind the current widespread pro-Russia attitudes in Serbia stems from a strong anti-NATO sentiment, and many Serbians seeing Russia as an alternative,” Branislav Radeljić, professor of International Relations at the Necmettin Erbakan University in Turkey, tells Emerging Europe.

Is Belgrade moving closer to Moscow?

Belgrade has long pursued closer integration with the European Union – late last year it opened up several new negotiation chapters on its path to full accession – while simultaneously maintaining close economic and political ties with Russia and China.

Russia’s invasion of Ukraine is likely to make such a policy unsustainable for much longer.

On March 11, MEPs sent a letter to the European Commission asking it to halt all accession negotiations with Serbia until the country aligns its foreign policy with that of the bloc. Serbia remains the only European country, other than Belarus, that has so far failed to impose any sanctions on Russia. Indeed, Serbia’s national airline, Air Serbia, has scaled up the number of flights it operates to and from Moscow, allowing Russians to circumvent an EU flight ban.

According to Metodieva, this has reinforced Serbia’s position as the voice of pro-Russian proxies across the Western Balkans.

“References to the Kosovo war portray the current situation in Ukraine as a form of revanche of Russia on the West,” she adds.

“Many Serbians believe that they have nothing to lose, while pro-Russia voices support revanchism regardless of any possible negative repercussions,” adds Radeljić.

A poll by the European Council on Foreign Relations from August 2021 revealed that 54 per cent of Serbian citizens perceive Russia as an ally, while 95 per cent see it as either an ally or a necessary partner. Only 11 per cent of the nation cited the EU as an ally.

As such perceptions remain common amongst Serbians, to what extent should the international community be worried about copy-cat Serbian military action in Republika Srpska?

“There will be calls for secession and Milorad Dodik will no doubt milk the situation,” Dimitar Bechev, an expert on Southeastern European affairs at Oxford University, tells Emerging Europe.

Dodik, leader of the Republika Srpska and one of Bosnia’s three federal heads of state, has long argued for closer ties with Serbia and Russia. His frequent calls to separate Republika Srpska from the rest of Bosnia have led to suggestions from some MEPs that he should be sanctioned.

Bechev however believes that Dodik is unlikely to actually make a formal declaration of Republika Srpska’s independence.

“For one, it is not a given that Serbia will support him,” he says.

“However, not having an immediate security threat to the region should not make NATO and the EU underestimate the risks to the Western Balkans in the long term,” says Metodieva.

She argues that an increase in polarisation means that actors in the region, such as Serbia and Republika Srpska, will seek to preserve Russia’s support for their political agendas.

Her view is that Russia is not interested in opening another conflict in the EU’s neighbourhood but that it will instead seek to foster secessionist narratives and support both Dodik and Serbian President Aleksandar Vučić. Serbia holds a parliamentary election on April 3.

Radeljić points out that alongside the internal divisions, the absence of a clear EU roadmap for Bosnia and Herzegovina has also contributed to the creation of a vacuum in Republika Srpska – Bosnia, alongside Kosovo, is the only Western Balkans nation yet to be granted candidate status.

He further argues that it is possible Serbia’s eventual loss of Kosovo will be accompanied by Republika Srpska attempting to secede.

“This is something the West should take into consideration these days instead of turning a blind eye or opting for soft criticism at best,” says Radeljić, adding that, “the more Bosnia is ignored and left to its status quo, the more the West is likely to be confronted with another round of too-little-too-late disparagement.”

“So far, this strategy has shown effects in favour of Russia and should keep the attention of the EU and NATO concerning regional security,” concludes Metodieva.