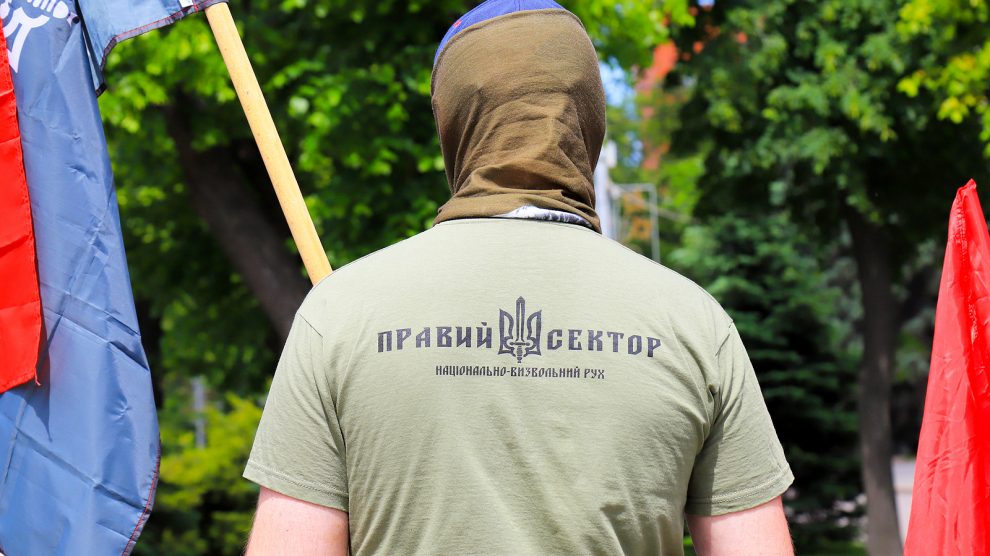 After a group of French senators visiting Kyiv to celebrate the city’s birthday stumbled across a far-right event involving children, Ukraine’s western allies no longer have any excuse not to demand action.

On the last weekend of May, the Ukrainian capital Kyiv celebrates its “birthday”, marking the day in 482 when the city was, according to legend, founded.

The occasion is usually celebrated with a panoply of cultural activities and events including concerts, charity runs, boat races on the Dnieper river, art exhibitions and film screenings.

This year, however, there was another – very different – kind of event. On Andrievskiy Descent, a scenic, historic road in central Kyiv, members of the Ukrainian far-right party Right Sector and its youth wing, Right Youth, put on a militaristic show for children. They invited kids to shoot from air rifles at a paper target of the Kremlin and at pictures of Colorado beetles (a derogatory term for Russians).

This rather macabre scene coincided with a visit to the city of three French senators to Ukraine. Nathalie Goulet, Jean-Pierre Moga and Joel Guerriau were all in Kyiv for its birthday celebrations, and apparently witnessed Right Sector’s display.

On June 10, the delegation officially submitted a request to the French Foreign Ministry to “know what the position of the Ministry for Europe and Foreign Affairs [is] on this subject and what measures it intends to take to avoid the contagion of this deadly ideology.”

“The neo-Nazi parties are developing increasingly visible activities, including in the centre of Kyiv, with shooting ranges, practices of assembling and dismantling Kalashnikovs and recruitment offices for young people for militias that clearly claim Nazi ideology,” their joint letter read.

The senators also claimed that they had seen pro-Nazi memorabilia being sold by Right Sector cadres, including identity papers of members of SS-Sonderkommando units.

Incidents such as that witnessed by the French delegation continue to fuel perceptions that the far-right in Ukraine, while electorally unpopular to the point of almost complete irrelevance, nevertheless enjoys a substantial degree of institutionalisation and clout within Ukrainian politics.

Bubbling under the surface for decades, the far-right came to mainstream attention following the Maidan Revolution of 2014. Far-right elements were present in the protests against then president Viktor Yanukovych, and had a higher degree of organisation, ideological zeal and propensity to violence than the bulk of the protesters.

Following the ousting of Yanukovych and the beginning of the war in the Donbas region in the east of the country, the Ukrainian military, riddled by low morale, defections and Russian spies and sympathisers, turned to the far right to bolster its ranks.

This has lead to the formation of some armed detachments – now officially part of the Ukrainian military – with openly fascist or neo-Nazi aesthetics. These also take in foreign volunteers, often themselves with far-right inclinations.

Earlier this year, this issue was brought to mainstream attention by the case of Craig Lang, an American who fought in Ukraine and was the subject of an extradition battle between Ukraine and the United States after being suspected of committing a double murder in Florida.

It is this element in particular which appears to be alarming representatives of western governments – that Ukraine has become a magnet for militant westerners seeking combat experience. Some commentators suggest that this may be one reason among several for the lack of progress being made on Ukraine’s accession to NATO and the European Union, more than seven years on from the Maidan Revolution.

Recent years have seen dozens of attacks conducted by far-right cadres on foreigners, ethnic Roma, LGBT+ activists and politicians considered to be “unpatriotic”.

Nationalist groups also hold summer camps for youths – this caused a scandal when photos were leaked showing children laying on the ground in the shape of a swastika. It then surfaced that the camp was run by a woman, affiliated with Right Sector, who served a prison sentence for the murder of a Nigerian man over a decade ago.

A 2016 documentary by French television channel Canal Plus was one of the first pieces of western reportages to shed light on the far-right in Ukraine. Since then, several representatives of western governments have voiced concern about the phenomenon; in 2018, G7 ambassadors sent a letter to then-president Petro Poroshenko about the issue.

Nathalie Goulet, the French senator who raised the issue about what she saw during this year’s Kyiv Day celebrations, has been particularly vocalsince concluding her trip to Ukraine. On June 15, she tweeted that this week, an official funeral was held in central Kyiv’s St Mikhail’s Cathedral for a member of the SS’s Galicia Division. The Galicia Division was composed almost entirely of Ukrainians and is considered to be one of the main culprits of the Holocaust in Ukraine.

There are now fears within Ukraine that the brazenness and impunity displayed by far-right nationalists is alienating the country from its potential allies in the west. With Ukraine harbouring ambitions to be a member of the European Union and a partner to the world’s democracies, such incidents are entirely counterproductive.

Furthermore, they provide plenty of fodder for the Russian government’s propaganda machine, which seizes upon such incidents to portray Ukraine as a fascist country.

However, that such episodes are now getting increasing amounts of attention from non-Russian sources may be positive.

European governments now have no excuse not to pressure the Ukrainian government to disassociate itself from unsavoury elements, in the process solidifying its democratic credentials.