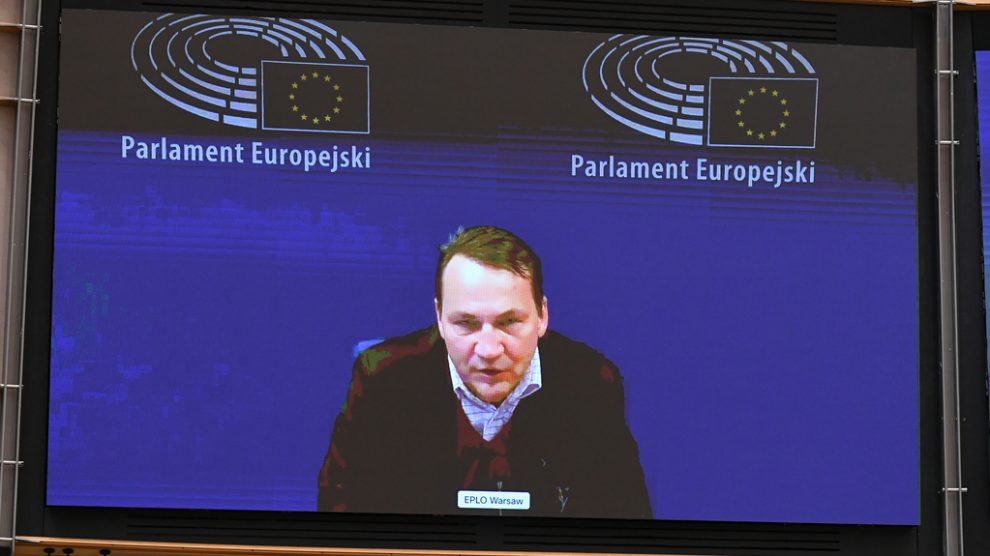 It’s not quite Oscar Wilde, but an ongoing Twitter spat throws a fascinating light onto the concerns of Poland’s business and political elites. Who has the biggest car, it seems, is what counts.

Some see symmetrism as the key characteristic of Poland’s democratic malaise. The old are as bad as the new, ex-PM Donald Tusk’s people were as corrupted by power as those of Jarosław Kaczynski, they say. Who knows what psychological flaws really motivate people to seek high office, but a glimpse into the lives of two of Poland’s richest politician-businessmen reveals a curiously insecure bunch.

“If that’s true, we have a pictorial metaphor here,” Sikorski wrote recently on Twitter, his tweet accompanied by a picture of a watch worn by state-owned energy concern PKN Orlen CEO Daniel Obajtek, which the MEP says cost up to 250,000 złoty (around 55,000 euros).

“MEP, I must disappoint you. Two zeros should be subtracted from the quoted amounts. An MEP should not duplicate fake news,” Obajtek riposted.

“I will believe you if you publish full property declarations from the time of Pcim, yours and your immediate family’s,” Sikorski replies.

Neither Obajtek nor Sikorski are strangers to scandals cooked up – both believe in Poland’s increasingly polarised and vitriolic public discursive culture – by their opponents.

Sikorski was secretly taped when foreign minister back in 2014 in what became known as Waitergate saying some rather saucy things about the US, as well as Poles and their “negroid” attributes, while Obajtek in a scandal last December was heard mouthing obscenities about his father-in-law, with whom he allegedly conducted business in the small town of Pcim.

Perhaps the right-wing journalist Rafał Ziemkiewicz was right after all when he wrote that the fall of the old Solidarity-based opposition in the early 2000s and the rise of Kaczynski’s Law and Justice (PiS) was down to the fact the most Poles would rather have a new car than read intellectuals interviewing each other about the successes of the EU.

Timing is everything. In May, Sikorski – like his MEP colleagues – had his financial assets published.

It turns it that Sikorski isn’t too bad off either. The MEP owns a house and two apartments, shares in a US company, runs a business, and received 100,000 złoty for consultancy work in the United Arab Emirates – according to his latest asset declaration for the European Parliament.

In addition to savings, Sikorski has two retirement accounts in the US and participates in a British pension plan.

He can also boast of several vehicles, including a tractor and a motorcycle, plus coins, paintings and portraits, as well as a collection of books.

Sikorski has a house with an area of ​​800 square meters and a value of six million złoty in Chobielin in Kujawsko-Pomorskie Voivodeship covered by a mortgage. In addition, he owns two apartments: of 170 and 133 square metres, worth 2.5 million and five million złoty respectively. In the case of the former, he has rights to half of the property. Both are also mortgaged.

The MEP has 16,411 shares of the American company Silvair INC, which creates software for solutions in the field of the Internet of Things. It is listed on the Warsaw Stock Exchange, the current price per share is 6.30 złoty.

In addition, he declared that he runs a business, Sikorski Global, with 607,500 złoty in revenue and 333,000 złoty net profit. Part of this amount is 100,000 US dollars obtained from sitting on the advisory board of the Sir Bani Yas Forum Conference, an event organised in the United Arab Emirates.

As an MEP he earns 107,500 euros. The politician, without specifying the amount, also earns from rents for land and real estate, reported under PIT and business activity; columns and articles submitted in the same way; YouTube royalties transferred to an orphanage in Bydgoszcz; fees for university and commercial lectures, settled as part of business activities; consultancy settled in the same way.

For his journalistic activity, he received the World Press Photo Award in 1988, and his academic work allowed him to become a lecturer at Harvard University.

He is also the owner of a motorcycle with a sidecar, made in 1978. He has shown the military machine many times on his Instagram account. There are also two cars parked in the MEP’s garage. The first is a 2010 Nissan Qashqai crossover and the second a 2015 Land Rover Discovery, worth about 140,000 złoty. There is also a John Deere tractor.

My house is bigger than yours

“Some manors are more equal than others,” the ever busy Sikorski – who declined to be interviewed for this article – wrote in another Tweet.

He was referring to the public funding for renovation works of a facility in Borek Lęborskie, called by Gazeta Wyborcza “Obajtek Palace”, owned by Obajtek. The Orlen CEO bought a ruined property in Kashubia, which was to be renovated and made available to foundations working for people with dysfunctions and disorders. Gazeta Wyborcza wrote that the palace was using a lot of money from the state budget.

Meanwhile, Sikorski applied to the Kuyavian-Pomeranian Marshal’s Office with an application for a subsidy for the renovation of his private property in Chobielin: 199,600 złoty on a property worth about four million złoty. The manor house is entered in the register of monuments, so Sikorski could apply for a subsidy, but the application was rejected, Wirtualna Polska reported.

The Polish opposition, Civic Coalition (KO) of which Civic Platform is a part – has problems. The coalition has been damaged by numerous reports of conflicts within Civic Platform, the weakness of Borys Budka’s leadership and the lack of a coherent programme. Some voters may also be confused by the activity of PO deputy leader and Warsaw mayor, Rafał Trzaskowski.

Szymon Hołownia’s Polska 2050 movement is consolidating second place in the polls at the expense of the Civic Coalition. In April, Polska 2050 was supported by 18 per cent of respondents and in May by 20 per cent. Budka’s anti-PiS rhetoric on the ratification of the EU’s Covid-19 recovery plan and a failed attempt to overthrow the government has not helped. KO lost three percentage points in a month, its support dropping from 17.5 to 14 per cent.

Sikorski is looking for silver linings, however.

“This poll is positive because the opposition, acting jointly, could form a government,” Sikorski said in an interview with Wirtualna Polska.

“One third of Poles have been convinced that there was an attack in Smolensk, one third do not want to be vaccinated, one third support PiS. I hope it is the same one third, because if not, woe to all of us,” he added.