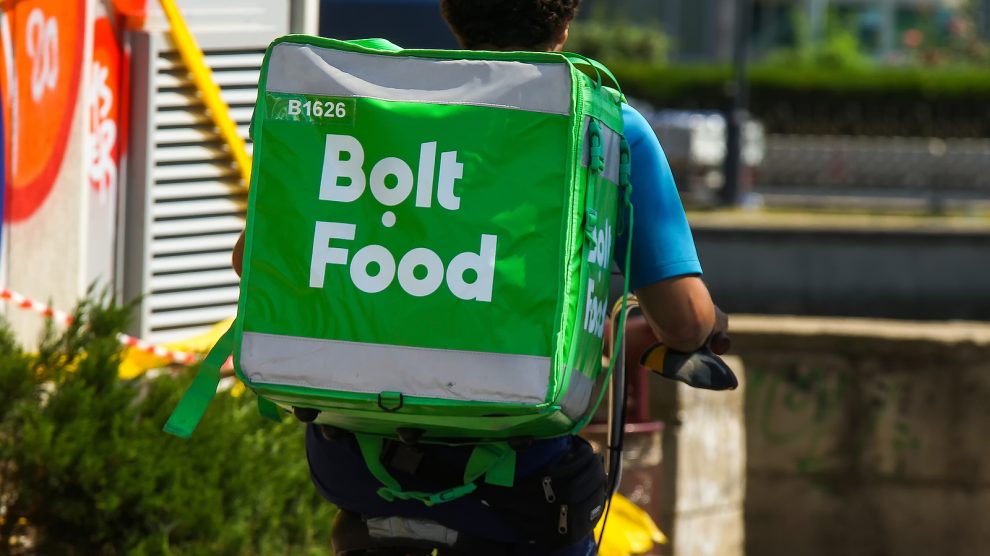 Bolt Food couriers in Kyiv went on strike last weekend in the first mass action since the service began operating in Ukraine.

Last weekend, anyone in Kyiv looking to order home delivery from Bolt Food was out of luck. Opening the app, users were greeted by a message stating that all restaurants on the service would only be accepting takeout orders.

The reason was a strike by Bolt Food couriers, the first since the app began operating in Kyiv in October of last year. In March, Bolt Food’s couriers in Georgia also held a strike demanding better pay and working conditions.

The immediate cause of the strike was a significant reduction in the payments and bonuses that couriers receive for completing deliveries. According to the striking couriers, Bolt Food reduced these by nearly 50 per cent in mid-August. This led some disgruntled couriers to refuse work after 2pm, the peak time for orders.

The strike then picked up momentum, culminating in the almost total downing of tools last weekend, when the app was essentially out of commission for delivery.

“There is a base amount that can be earned for one order,” explains Artem, one of the leaders of the strike who has been working for Bolt Food for more than six months and created the Telegram channel Bolt_Strike_Info to share information. “This base amount is calculated by taking into account various factors – such as the weather, or the distance.”

The strikers say that Bolt – which operates ride-sharing and courier services in 300 cities in 45 countries across Europe, Africa, Western Asia and Latin America – changed the algorithms it uses to calculate the base amount.

In addition to the fee couriers receive for every order, Bolt Food has a system of bonuses that it grants to couriers after completing a certain amount of orders. Before mid-August, there would be bonuses at every step for couriers completing 30, 50, 70 and 100 orders per week.

However, Bolt now only offers bonuses for completing 100 orders – and the bonus is significantly smaller, too, now 60 US dollars, down from 100 US dollars.

“Transportation costs the same, the risks are the same, but the payment is halved,” Artem – who asked for his surname to remain confidential – tells Emerging Europe. “We are obviously outraged by this.”

These reductions in payments triggered couriers to take action. They have also been using the opportunity to demand better working conditions, such as formal employment contracts, guaranteed fixed minimum fees for delivery and higher-quality health insurance.

“You constantly hear about our comrades getting into car accidents, who needed treatment or even surgery. In seven full workdays, a courier can travel 1,000 kilometres in Kyiv traffic. You constantly need to repair your vehicle or replace a part. If couriers get hurt on the job, there has to be a certain cushion so that they don’t go hungry while they are being treated,” Artem argues.

Additionally, Bolt Food’s official Telegram channel for its Tallinn service shows that it is capable of meeting at least some of the requirements set forth by the Ukrainian strikers.

In the Estonian capital – Bolt’s home city – couriers earn a minimum fee per delivery, currently standing at 2.75 euros. Beyond this, there are multipliers that augment this fee, depending on the time of the day – on September 10, this minimum fee was temporarily raised to 3.25 euros per delivery, for a three-hour lunchtime window.

Despite the strike, Bolt in Ukraine seems to be refusing to budge. The company did not respond when asked how there could be constructive dialogue between employees and management, but did send a response, from country manager Ihor Shramko, to the media:

“Bolt Food is a platform that connects couriers, restaurants and clients to provide quick, reliable and convenient food delivery services. Bolt uses algorithms to balance demand and supply with a flexible courier bonus system, customer discount system, and promotions to create the best offering for all parties involved.

“Bolt Food couriers’ earnings consist of a combination of base fares and bonuses. We are continuously working on increasing demand on our platform, which, in turn, leads to more orders and higher earnings for our courier partners. The couriers’ earnings per delivery on Bolt Food’s platform in Ukraine are higher than with any other delivery service on the market.

“Bolt believes that happy couriers provide a better service to the people they deliver the food to. Therefore, we are committed to treating our couriers with respect and offering them good earning opportunities. Our food team is constantly in contact with our couriers. We encourage them to give us direct feedback about their experience as this is what we rely on to provide the best service to restaurants and the people ordering the food.”

So-called gig contracts are becoming increasingly prevalent, particularly for services like Bolt. Gig contract workers are not generally considered full-time employees, which would require compliance with Ukraine’s labour code, but rather independent contractors.

Much of the developed world has slowly been counteracting the proliferation of gig work through legislation. In February this year, the United Kingdom’s supreme court ruled that Uber drivers have to be treated as full-time employees by the company.

In August, a California superior court judge also ruled that Prop 22 – a bill that would formalise gig contracts, which companies like Uber and Lyft collectively spent more than 220 US million dollars lobbying for – was unconstitutional.

Spain has also cracked down on the practice since March of this year when it made similar rulings regarding the status of gig workers. Glovo, one of Bolt’s main competitors in Ukraine, is based in Spain.

However, in Ukraine, legislation appears to be going in the opposite direction. The impending Diia City programme envisions formalising gig contracts in the IT industry, which would include food delivery services like Bolt Food and taxi companies like Uber and Uklon.

As such, the unstable relationship between gig workers and employers is set to continue. In an interview with Ukrainian newspaper The Village, Taras Potichny, former manager of Bolt’s Ukraine operations, called it a “ticking time bomb” that “sooner or later will explode”.

Bolt Food currently appears to be operating as normal.

However, graffiti and stickers in support of the strike are popping up throughout Kyiv, particularly concentrated around popular restaurants that feature on the app.