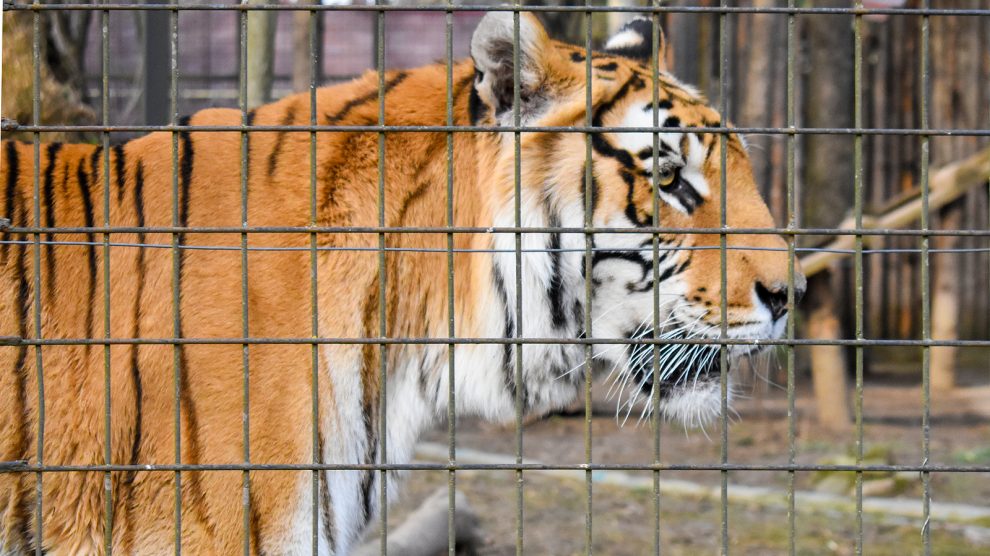 Ukraine is slowly but steadily addressing animal cruelty with new legislation. Its effectiveness, however, is still patchy.

Until recently the city centres of popular tourist destinations in Ukraine – such as Kyiv, Odesa, Yalta and Berdyansk – were teeming with dubious characters offering visitors the chance to have their photo taken with exotic animals, usually monkeys and various kinds of birds.

There was never a shortage of clients.

Many “luxury” restaurants would also have “pet” animals. Not cats or dogs belonging to the owner, but rather monkeys, exotic birds and sometimes even bears, tigers, lions and jaguars kept in cages for “entertainment”.

These animals are often smuggled into Ukraine illegally, kept in horrific conditions during their journey to and stay in the country. What’s more, as well as being deeply cruel to the animals themselves, it also represents a health risk to people, as most of these animals are unvaccinated and undocumented.

Such practices have now, finally, been criminalised.

On August 6, Ukrainian President Volodymyr Zelensky signed a law banning the use of animals for photos and begging, as well as the captivity of wild animals in restaurants.

The law bolsters 2006 legislation on animal cruelty, which so far has proven to be almost entirely ineffective.

“In terms of animal rights, Ukraine lags behind other countries by at least 10 years,” says Oleksandr Todorchuk, founder of animal rights NGO UAnimals. According to Todorchuk, authorities have ignored eight other animal protection bills – the law adopted in early August is the first to be passed by the current government.

The law provides grounds for criminal prosecution of people found guilty of harming or killing animals. Milder abuse, like neglect, carries with it administrative penalties like fines and confiscation of the animal.

The passage of the bill was certainly a success for animal rights activists who have been campaigning for such laws for decades. However, it only addresses a small part of animal cruelty in Ukraine. Entertainment involving animals continues to thrive, whether in circuses, dolphinariums or petting zoos.

Such practices normally exacerbate mistreatment of animals. The performing animals are usually kept in confined spaces and “trained” to perform using whips, batons and electric prods. When the animals get old and weak, they are normally either killed, or sold to restaurants for their patrons’ amusement.

Such cruelty was one of the main items on the agenda when animal rights activists and supporters staged a rally in 26 cities across Ukraine on September 5.

To the government’s credit, travelling circuses have long been banned from using wild animals as part of their performances. However, “fixed” circuses – like the iconic National Circus – continue to use wild animals.

A law that creates new problems

Mariya Trunova, an activist with the Ukrainian Association for Animal Advocates, believes that while the recently passed law is a positive development, there are still many questions regarding its implementation.

“The law is certainly a good step. But the question is how will this be actually enforced…it is very difficult to work with the authorities on such issues, although things have been getting better.”

The law comes into effect in November. According to Trunova, since it was passed, many owners of restaurants and resorts which held caged wild animals for display have already begun asking the authorities what they should do with their animals.

This has presented its own problem: where should the animals go?

“It is good that they have banned from restaurants and resorts, but now there is nowhere to house them, not even temporarily,” explains Trunova.

She brings up one recent case regarding a resort outside the city of Kharkiv; the resort kept two lions, a tiger and a black jaguar on its premises. And while Trunova and her colleagues have been working to find these animals a new home, it has not been easy.

“We are calling everywhere. We are prepared to send them abroad. But we are still looking – hopefully someone, somewhere in Europe can help somehow,” she tells Emerging Europe.

This problem is particularly serious for exotic animals used to warmer climates. More indigenous animals, like wolves and bears, can be reintroduced to nature reserves, albeit with the need to be regularly fed by humans, since they lack the necessary survival skills to adapt to living in the wild. However, there is no such option for the tigers and lions stuck in Ukraine.

While businesses like restaurants and hotels are giving up their wild animals in anticipation of the law coming into force, an open black market for exotic wild animals continues to flourish.

Ukrainian law allows the breeding and sale of animals, including exotic animals. And while the law requires adequate documentation when selling the animal, in practice this is barely enforced.

On platforms like e-commerce site zakupka.com, anybody with a few thousand US dollars to spare can buy a lion, a leopard, a caracal or a monkey as easily as ordering a pizza. These are regularly bought by wealthy people for their amusement – and when they become too burdensome to take care of, these animals are often killed.

“Nobody controls this, and nobody regulates this. The law allows you to breed and sell animals, so there’s nothing stopping people from doing this. Imagine, some breed monkeys in their apartments,” says Trunova.

A case in the city of Khmelnitsky encapsulates the seedy nature of this animal trade. Earlier this year, a court confiscated five bears from an individual, after animal rights activists exposed the abysmal conditions in which the bears were being kept. A months-long legal battle ensued, with the owner staking his rights to ownership over the animals.

Finally, on September 9, local media announced that the bears would be transferred to an animal sanctuary in the town of Sataniv, in the Khmelnitskiy region.

While this is major a victory in the fight against animal abuse in Ukraine, thousands of wild animals throughout the country continue to be stuck in captivity, often in horrific conditions.

And with restaurant and hotel owners now giving up their “pets”, existing animal sanctuaries will be put under even more strain.

As such, Ukraine’s animal rights advocates still have a long uphill battle ahead of them.