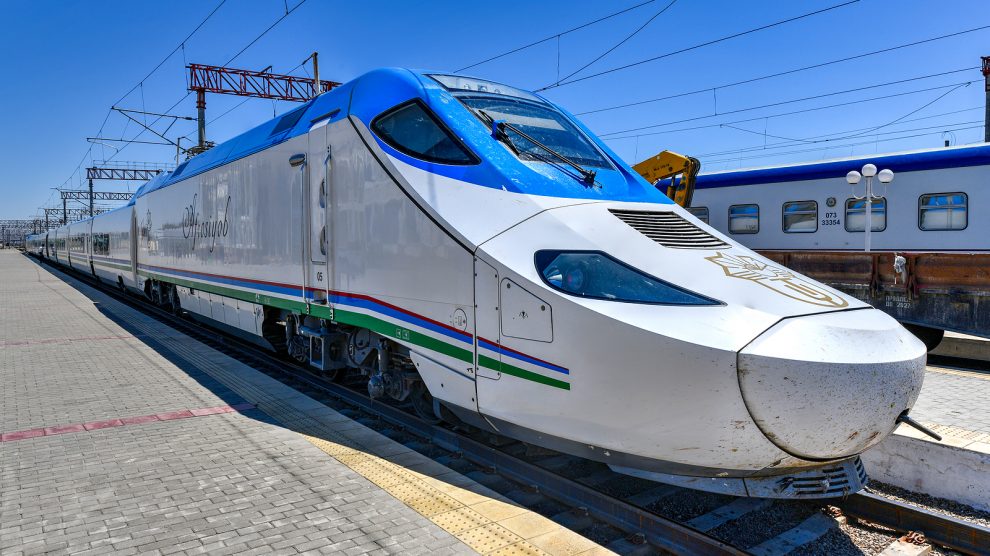 Uzbekistan’s impressive high-speed rail lines have proven to be a major boon for the country’s economy and an example of well-planned public infrastructure.

While much of Central and Eastern Europe and Central Asia continues to struggle with outdated, often decrepit railway infrastructure, Uzbekistan has over the past decade developed a high-speed network that has become the envy of the region.

Today, ten years on from the inauguration of the first line, Spanish-built high-speed trains operate three routes, with the Uzbek government making plans to continue upgrading and expanding the rail system’s capabilities.

The first line of the high-speed rail system, linking the capital Tashkent with the historic Silk Road city of Samarkand was built at breakneck speed: initiated by decree from then president Islam Karimov, construction of the 344-kilometre line was completed in just five months.

The project made Uzbekistan just the second country in the post-Soviet world – after Russia – and the first in Central Asia to have a high-speed rail system.

“This project enhances the attractiveness of railways as an environmentally friendly, reliable and affordable mode of transport for the people of Uzbekistan.”

The electric trains used on the route, known as Afrosiyob, are manufactured by Spanish company Talgo and can reach a top speed of 250 kilometres per hour. It now takes just over two hours for passengers to travel from Tashkent to Samarkand, compared with up to five hours by car or bus.

In 2016, Uzbek railways completed an extension of the Tashkent-Samarkand line, building a further 256 kilometres of track to the city of Bukhara. Presently, Uzbekistan boasts 600 kilometres of high-speed railways – the fourteenth most extensive network in the world and double what can be found in the United States.

While another extension, from Samarkand to the southern city of Qarshi, was opened in 2015, trains operating on this 141-kilometre track fall short of the threshold to be classified as “high-speed” (generally considered to be 200 kilometres per hour), running at a top speed of 161 kilometres per hour. From there, travellers can continue their journeys even further.

Regardless, Uzbekistan is now in possession of close to 1,000 kilometres of electrified rail, the bulk of which is “high-speed”.

Since 2018, the service has been operating beyond capacity due to excessive demand, with passengers often having to buy tickets months in advance.

In response, the Uzbek government has ordered a two further trains from Talgo – to add to the four already inoperation. The first of the new trains was delivered in July of this year.

Noticing the success of the project, the Kazakh government announced earlier this year that it would be undertaking a similar project, connecting its southern province of Turkestan to Tashkent through a high-speed rail line.

High-speed rail has been particularly advantageous to Uzbekistan’s tourism industry.

The country is chock full of historical sites, many of which have somewhat flown under the radar as viable tourism destinations due to a lack of worldwide exposure.

But historical sites like Samarkand, once an important centre of Islamic scholarship, and Bukhara, the old capital of an eponymous khanate that ruled much of the region now easily accessible, that is changing.

Dr Jamshed Safarov believes that the completion of the railway opened new opportunities for the tourism industry.

“It is much better to travel between two cities in two hours onboard a comfortable Spanish-made train than drive four hours on an often bumpy road,” he explains. “By 2016 travel companies and independent tourists could replace these uncomfortable drives with the train. This allowed them to cut the transportation time and use the saved time for cultural experiences in Samarkand and Bukhara.”

Dr Safarov’s company, Veres-Vert, capitalised on this infrastructure by pioneering tours using the Afrosiyob trains, where tourists can visit Tashkent, Samarkand and Bukhara in the space of just four days. The lighting-fast speed of the trains leaves plenty of time for visitors to explore the historical heritage found in these cities.

Now, Uzbekistan, as well as hosting magnificent cultural heritage and historical sites, can also give visitors a glimpse of the future, with its modern high-speed trains.

And Dr Safarov is full of praise for his government making it happen.

“Our government has a clear understanding about the prospects of high-speed railways for the national economy and tourism in particular. This is why the expected Bukhara-Khiva extension will be truly revolutionary for our sector, which witnessed a huge boom during the pre-pandemic years thanks to visa-free policies and a number of other reforms, and makes a quick recovery and continued growth certain.”