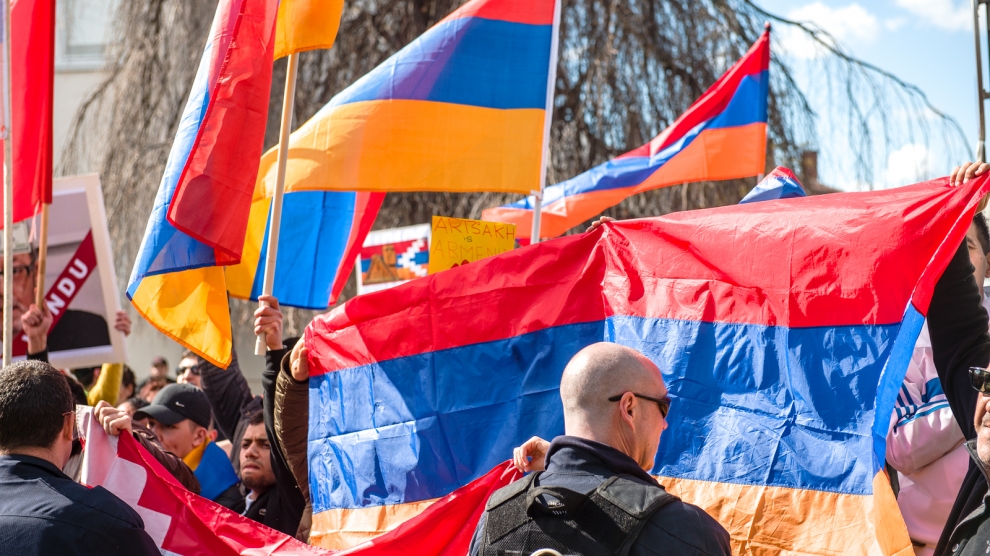 The two former Soviet republics of Armenia and Moldova have a lot in common: since independence, both have been involved in armed conflict, and both have regularly seen promises of reform come to nothing. That might now be about to change.

In snap parliamentary elections held in both countries over the summer, reformist political parties were handed large mandates to once and for all stamp out corruption.

What makes their achievement all the more remarkable is that the reformist leaders of the two countries, Prime Minister Nikol Pashinyan in Armenia and Moldovan President Maia Sandu, had to manage without direct engagement from the European Union.

In June, Armenia held early elections less than a year after the end of a short war with Azerbaijan in Nagorno-Karabakh, a war in which Armenian forces were roundly defeated, ceding territory in and around the Nagorno-Karabakh region.

Pashinyan was held personally responsible for the defeat, and what many Armenians considered a humiliating ceasefire agreement. For months his position appeared untenable, with large scale street protests regularly calling for his resignation. Senior figures within the Armenian military were also keen to be rid of the prime minister, who first took office following a previous round of protests in 2018.

In Moldova, Sandu had been locked in a power struggle with a hostile parliament since winning a presidential election in November 2020, in which she defeated incumbent Igor Dodon, who had long advocated closer ties with Russia and was close to the country’s oligarchs.

Sandu regularly accused the legislature of sabotaging her reform agenda and repeatedly pushed for snap elections in order to secure a new majority.

Doing so was not easy. Moldova’s president can only dissolve parliament in certain circumstances. But by making use of the few constitutional tools at her disposal, as well as her political nous and determination, she eventually managed it.

For both Pashinyan and Sandu, the gamble paid off.

In Armenia’s snap election, held in June, Pashinyan’s Civil Contract party took 54 per cent of the vote, and 71 seats in the country’s 107-seat parliament.

The party took almost 53 per cent of the vote, while the Communists and Socialists, running on a joint ticket, managed just 27 per cent. Sandu’s party now has a healthy majority in parliament, holding 63 of 101 seats.

In both Armenia and Moldova, the pro-reform parties of the two leaders managed to succeed primarily as a result of their promises to tackle corruption.

Both countries, especially Moldova, have struggled with high levels of graft for decades, a direct cause of their economic stagnation. Tackling the problem now appears to be top of the political agenda not just for a few reformers but for the population at large: that Pashinyan was able to win the election despite being seen as responsible for defeat in Nagorno-Karabakh speaks volumes to shifting priorities.

“People who were previously undecided voted for Pashinyan in large numbers not because they like him, but because they feared Kocharyan and the opposition more,” says Richard Giragosian, director of the independent Yerevan-based Regional Studies Centre, a think tank.

Denis Cenusa, a Moldovan political scientist, says that “an anti-corruption agenda and anti-elitism, which overlapped with counter-oligarchic discourse” played a major role in the success of reformist parties in the two countries.

Despite the success of pro-reform parties in Armenia and Moldova, both – for now at least – remain hybrid regimes prone to political instability.

Past shortcomings in Yerevan and Chișinău have created a deep lack of public trust in state institutions, something which has been manipulated by oligarchs to fit decision-making processes to their interests.

Indeed, this high level of distrust led to low turnout in both elections: fewer than 50 per cent of people cast a ballot.

Pashinyan and Sandu will therefore need to deliver on their promises in order to restore trust, and support from the European Union will play a key role making sure that they are successful.

Both Moldova and Armenia are members of the Eastern Partnership, an initiative which the EU established with six countries (the others are Azerbaijan, Belarus, Georgia and Ukraine) in 2009. Moldova has also concluded an Association Agreement with the EU, and Armenia a Comprehensive and Enhanced Partnership Agreement.

Nevertheless, the EU’s track record in the region is patchy. It has not been able to offer a clear path (or indeed, any path at all) towards full membership.

“The sustainability of western aid is questionable because it is based on the reign of a particular political party, something that can change,” Cenusa tells Emerging Europe.

“The problem is the miscalculation and misunderstanding of local realities. The EU tends to turn a blind eye [to corruption] if a pro-EU party [is in office].”

Both Pashinyan and Sandu won their snap elections with little overt support from the EU, by promising to deal with corruption. But now the EU will need to back them, hold them to account, and end its policy of overlooking corruption if carried out by “pro-Europeans”.

Neither country has ever been in a better position to break away, definitively, from their Soviet legacies. It would be a shame to waste the opportunity.