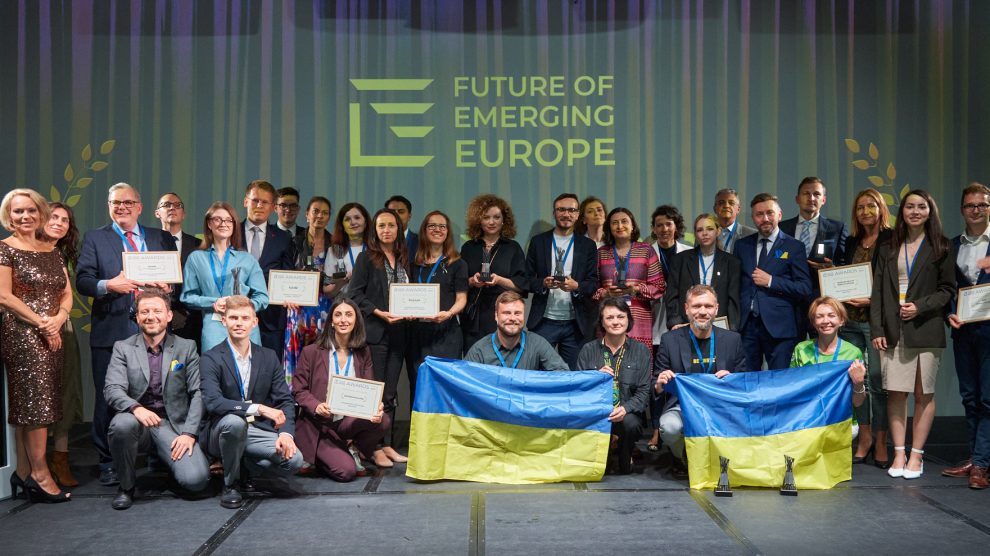 Individuals, businesses and organisations from across Central and Eastern Europe saw their work recognised at Emerging Europe’s fifth annual summit and awards in Brussels.

The work of more than 60 NGOs, businesses and individuals from across Central and Eastern Europe was recognised in Brussels on June 23 at the 2022 Future of Emerging Europe Summit and Awards, the fifth edition of a programme that highlights best practice, innovation and courage across the region.

Winners, split across Emerging Europe’s five pillars, based on the United Nations Sustainable Development Goals (People, Planet, Prosperity, Partnership, Peace), were in large part chosen by the global Emerging Europe community: in all more than 8,000 votes were cast for the various nominees.

The awards were handed out by the BBC’s Kasia Madera.

Among the winners in the People pillar was Unbreakable Campaign, a Serbian initiative which helped prevent the coronavirus pandemic from being followed by an epidemic of mental health conditions, and fights the growing depression and stigma that accompanies those suffering with their mental well-being.

Also honoured – in the Youth Empowerment category – was Young in the Arena, which runs a nationwide mentorship programme in Romania for young persons aged 16-24 to help them become successful entrepreneurs, while another Romanian initiative, Code KIDS, creating a STEM movement across the country, was Future-Proof Education Initiative of the Year.

In the Planet pillar, the Project for Energy Efficiency in Public Buildings in Lutsk, Ukraine, won the Green Energy Initiative Award, with Ecoreactive, an organisation committed to mitigating climate change promoting a green economy – and also from Ukraine – taking the Sustainable Lifestyles gong.

The People-First Economy Award, one of six Prosperity categories, went to My First Salary, a Serbian initiative addressing youth unemployment by financially supporting first-job placements of those under 30.

“This is the kind of project, bringing together the public and private sector, that we would like to see launched in other countries,” said Vukašin Grozdić, an advisor to the Serbian prime minister’s office.

Other winners included the Iris Business Incubator from Armenia, for empowering entrepreneurs, including persons with a migrant and refugee background, in developing successful ventures, and Poland’s Docplanner Group, which was named Emerging Europe’s Global Champion of the Year.

A global healthcare platform, Docplanner strengthened its leading position as a provider of SaaS solutions to patients, doctors and clinics around the world in 2021.

The region’s Foreign Investor of the Year was SK IE Technology, for its contribution to strengthening electromobility and contributing to the growth of Poland’s position as a European production leader in the electric cars industry.

The Estonian Investment Agency won Investment Promotion Agency (IPA) of the Year – for the third year in a row – while Prague was named Business Friendly City of the Year: two categories whose winners were decided by Emerging Europe’s empirical research.

“There are lots of opportunities in this region, and I hope that all the region’s IPA’s will collaborate to attract more and more foreign direct investment,” said Joonas Vänto, director of the Estonian Investment Agency.

Ukraine’s DIIA City, for its unique contribution to positioning the country as a powerful IT hub, was named Modern and Future-proof Policymaking Initiative of the Year. The country’s IT sector has been a symbol of resilience since Russia invaded Ukraine in February.

“We launched DIIA City just a couple of weeks before the Russian invasion, but we already have hundreds of companies and around 20,000 IT experts on board. They are the heroes of our economic frontline,” said Georgii Dubinskyi, Ukraine’s deputy minister of digital transformation, accepting the award.

For their creativity in turning a comic book into a tool for media literacy and critical thinking in Armenia, Poland and Ukraine, Artifake took the Media Freedom award, with Grupa Granica, a Polish NGO helping migrants on the country’s eastern border, worthy Human Rights award winners.

Moldovan environmental activist Gabriela Isac was Young Influencer of the Year, and Vedrana Likan of Colliers the Female Business Leader of the Year.

“The future is female, and not just in business,” said Vedrana Likan.

President Maia Sandu of Moldova was named by Emerging Europe as its Public Figure of the Year, recognition for her unswerving commitment to democracy, the rule of law, and a European future for Moldova.

Finally, two leading figures from the world of international diplomacy and film were named as the winners of Emerging Europe’s Professor Günter Verheugen and Princess Marina Sturdza awards for 2022.

The Professor Günter Verheugen Award, given to eminent individuals from outside emerging Europe who have contributed to the region’s prosperity and peace, has this year been given to Sir Malcolm Rifkind, former UK foreign secretary, while the Princess Marina Sturdza Award, given to eminent individuals the region who have contributed to its prosperity, science, culture and peace, went to Polish filmmaker Agnieszka Holland.

“I am incredibly touched and moved to receive this award,” said Sir Malcolm, who paid tribute to the progress that the emerging Europe region has made over the past 30 years.

“It’s turned out dramatically better than anything that seemed likely in the 1980s, when these countries were all still part of, or under the influence of, the Soviet Union,” he said.

With all eyes on Ukraine, has the EU given up on the Western Balkans?
EU confirms Ukraine’s candidate status: Emerging Europe this week
Comment