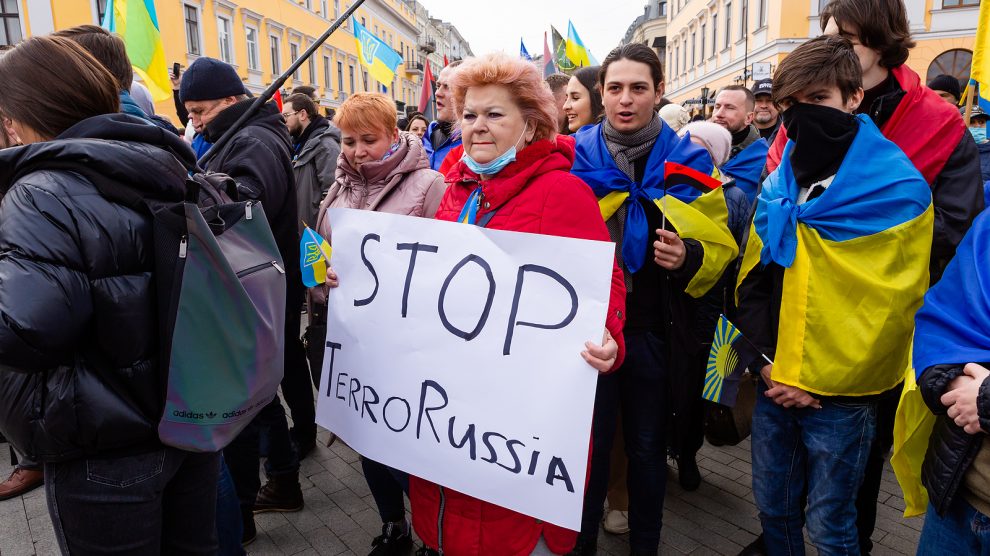 For eight years, Ukrainians desperately pleaded to be heard. Instead, the world chose to see the victim of unprovoked and undeclared war through the aggressor’s distorted lens.

Imagine waking up to the news that your country is being bombed by missiles. Imagine calling your family and friends to wake them to explain that they need to seek shelter immediately. Imagine those close to you are stationed at sites hit by Russian missiles. Imagine you have no way to reach your relatives at the frontline.

The evil regime in Moscow was not born at today’s dawn when Vladimir Putin gave the order to attack peaceful, sleeping Ukraine far from the military conflict zone.

This evil rose before our very eyes because too many chose to look away from it as it grew, lacked the moral integrity and courage to stand up to it, or were complicit in helping its rise.

This war was brought to Ukraine by Russian lies and because the world lacked the resolve to speak the truth.

For eight years, Ukrainians desperately pleaded to be heard. Instead, the world chose to see the victim of unprovoked and undeclared war through the aggressor’s distorted lens.

As Ukrainians told the world that Russia was waging an undeclared war on them, the “balanced” turned a deaf ear, promoted a Kremlin crafted upside-down unreality of lies about “separatists” and “green men” instead. They spoke of Ukraine as a “failed state”, with a “problem of the ultra-right”, and with “corruption so pervasive that it posed a greater threat to the country than war”. This was designed to undermine support for Ukraine.

As Russian state propaganda media was dehumanising Ukrainians, the “cautious” and “understanding” masked their lack of integrity by hollowly repeating “never again”.

When a brave European nation stood up to a nuclear capable military power, the “careful” and “considerate” sat on their hands expressing “concern” but denying any military assistance to help it defend against the attack.

For eight years, Ukrainians screamed into the void that Putin is getting ready to challenge the world, because it was the only way for Moscow to try to consume Ukraine.

Instead of being treated like a criminal, rogue, outlaw regime that had to be stopped, the “diplomatic” and “political” offered Moscow handshakes and “off ramps” by pressuring Ukraine into dangerous concessions.

For eight years, Ukrainians begged the world to stop financing Russian aggression. Instead, the “pragmatic” and “forward thinking” increased Europe’s reliance on Russian energy, accepting their bloody and corrupt money into western economies.

When we pleaded with you to impose severe sanctions like a food-for-energy embargo, and to contain Russia’s militarisation, those professing “no politics, just business” were building new pipelines to circumvent Ukraine to make it even more vulnerable to attack.

Today is the day of final unmasking of the mad regime in the Kremlin which is threatening the entire world.

Today is the day of shattered illusions about the bankrupt policy of “diplomacy”.

It is time to stand up in defence of our values and fight back against the force of destruction.

Today marks the ultimate failure of the West’s Russia policy since the collapse of the Soviet Union. Russia, which was allowed to integrate into the international community without any recognition and repentance for its past crimes, was bound to step on the revanchist path.

And today is the day we face the consequences of our cowardice and moral depravity, watching the architecture of the international security order crumble.

But not all is lost yet.

If we choose the path of truth, there is hope that we can halt the world spiralling down into the abyss of destruction.

What should be done?

Putin is an international criminal and must be brought to justice together with the other members of his mafia regime, including oligarchs and others acting as an extension of the Russian government.

Russia must be completely isolated politically and economically. It must be stripped of its privileged position in international organisations. The world cannot have a terrorist criminal regime entrusted with securing world peace.

The international community must provide all necessary material, financial, and military support to Ukraine to help its defence, and to prevent a total humanitarian catastrophe. Ukraine’s sovereign debt must be forgiven. NATO’s military must help protect Kyiv, and its navy must block Russia’s attack on Odesa from the Black Sea.

The international community must issue an unconditional ultimatum to Russia to immediately cease its aggression against Ukraine or face action by the coalition of the willing to repress  Russia’s threat.

We cannot turn back the clock on all the harm and damage that has been done. But we can do everything in our power to ensure that this is Moscow’s last atrocity.

We must conceive of a future Russia where Moscow is no longer ruling over a dozen oppressed nations enslaved in the Russian Federation, and can no longer threaten other nations with nuclear weapons.

We must conceive of Ukraine which is no longer a “buffer state” between the European fortress and the land of rogue dictators. Ukrainians have amply proven they are part of the free world. Their nationhood must be safeguarded.

Today, Ukrainians do not feel despair.

They continue to fight for their dignity and freedom. They know that Russia’s attack comes from its powerlessness to stop democratic change in the region. The blazing dawn over Ukraine today should mark the beginning of the building of a new international security order where evil can and is stopped because there is resolve and courage to stand up to it.

This article was co-authored by Ariana Gic, a political and legal analyst, and director of the Direct Initiative International Centre for Ukraine.

Roman Sohn is a legal expert and chairman of the Direct Initiative International Centre for Ukraine.

We must stand up to Putin now, before it is too late
Informal economy and regional security: Africa and the EU must act
Comment