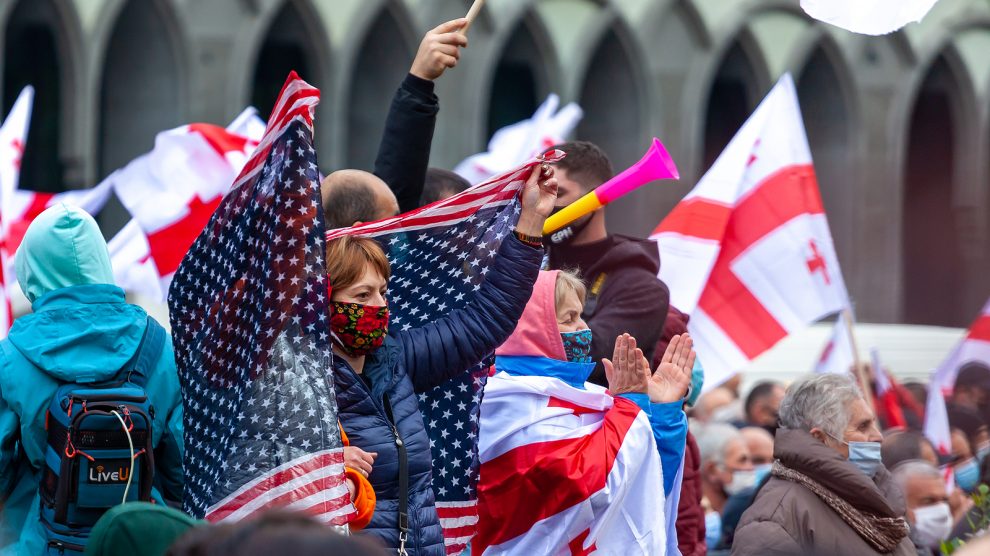 Never before have local elections been so important for Georgia’s future.

As Georgia prepares for runoffs in the most important local elections in the country’s history, the governing Georgian Dream has turned increasingly illiberal.

In 2012, angry Georgians came out in their thousands to oust Mikheil Saakashvili. Back then, such things were still possible.

The only alternative to Ivanishvili is a coalition based on the values of multiparty plurality and consensus. And that is precisely what we, the Georgian opposition, now offer.

Local elections have never been this important in Georgian history. Such significance has primarily stemmed from the commitment undertaken by the government under the aegis of the Michel Agreement, an EU-brokered document that ended a months-long parliamentary crisis earlier this year.

According to the agreement, the government will hold early parliamentary elections if it receives less than 43 per cent of the vote in the local elections. Although Georgian Dream has reneged on this obligation, a new political reality has emerged all the same.

Georgian Dream failed to win any of the country’s large cities. In the runoffs being held this weekend opposition mayoral candidates lead in four out of five key cities. Moreover, the opposition has already obtained a majority in the assemblies of several urban zones such as Batumi, Zugdidi, Rustavi, Senaki and Tsalenjikha.

In the meantime, in Tbilisi the opposition has upped the ante as the leaders of four different parties, Lelo, Girchi, Droa and European Georgia have joined Nika Melia, the United National Movement’s chairman and mayoral candidate, as prospective deputy mayors and announced a shadow municipal cabinet. This has significantly consolidated the unity and resolve of the opposition.

For the first time since 2012, when Georgian Dream swept to power, the ruling party faces a very real risk of losing in all major cities. With big cities under the control of the opposition, the party will lose whatever little political and moral legitimacy it might still have. This is precisely how these local elections could easily turn into a political earthquake of a national magnitude.

In general, too, Georgian Dream has used explicitly anti-democratic rhetoric as it has repeatedly vowed to “end the UNM”, the country’s largest opposition party with over half a million voters, and called other opposition leaders, such as the leaders of Lelo, Khazaradze and Japaridze, themselves victims of politically motivated persecution, “criminals”.

Moreover, in a revanchist manner, Garibashvili has threatened that “everyone will receive an appropriate answer” once the elections are over and also attacked the very idea of a self-governing democracy, stating that there is hardly any point in electing opposition mayors since the “central government” would not let them take even a single step.

In a language reminiscent of Hungary’s Viktor Orbán and Poland’s Jarosław Kaczyński, the leaders of Georgian Dream have talked of sovereignty being infringed upon by external powers whenever they have been rightfully criticised for lack of respect for democracy and rule of law, as well as the failure to undertake judicial reforms.

Needless to say, such rhetoric is starkly at odds with the Georgian Dream’s alleged aspiration to join the EU. Although the party has a pro-western rhetoric, in practice its policies have only served to distance the country from her European aspirations supported by the vast majority of Georgians.

As it speaks of upholding freedom and democracy during visits to Brussels and Washington, back home it has sought to demonise opponents, attack the media, undermine independent institutions and unlawfully spy on diplomats, politicians, civil servants and high clergy.

Presented with the opportunity to employ the Michel Agreement as a tool of strengthening Georgia’s reformist zeal, the government instead obstructed it, only to leave the EU-brokered agreement completely. This has already cost Georgia a heavy price not only politically, but also economically. The government’s explicit neglect of the commitment not to continue with the politicised appointments to the judicial system has resulted in the loss of the second tranche of the EU macro-financial assistance package worth 75 million euros.

Georgian Dream might stubbornly argue that Georgia is going to apply for EU membership by 2024, but the bitter truth is that prospects for any meaningful deepening of EU-Georgia relations are rather slim with this illiberal government at the helm.

Maintaining the stability of the regime is clearly the only priority for the Georgian government. Sadly, on this path, the party no longer recognises the existence of any moral or political boundaries, or indeed of constraining mechanisms that would keep them in check. Clearly, not even the EU.

The victory of coalition forces is the surest way out of this systemic impasse and the most effective cure to the illiberal monopoly exercised by Georgian Dream. Establishing opposition coalition governments in Georgia’s large cities is the most viable mechanism of dividing power and giving way to a new culture of checks and balances. Moreover, it is also a credible way of taming the autocratic tendencies of the government. After all, coalitions have always been harbingers of national political change in Georgia. From Gamsakhurdia to Saakashvili, nearly all governments have come to power through coalitions.

However, unlike the coalitions of the past, which have typically ended in single party domination, or even a one-man show, this coalition is based on the ideals of consensus, competence and equality. With the leaders of five parties united as one team, there is a greater equality among the leadership than any coalition has ever seen in Georgia that looks promising. For the first time in Georgia’s long history, unity through diversity could stand a very real chance of reshaping the country’s political future.

Dr Grigol Gegelia is one of the leaders of Lelo for Georgia and the party’s foreign secretary. He holds a Ph.D. in political theory from the European University Institute in Florence.