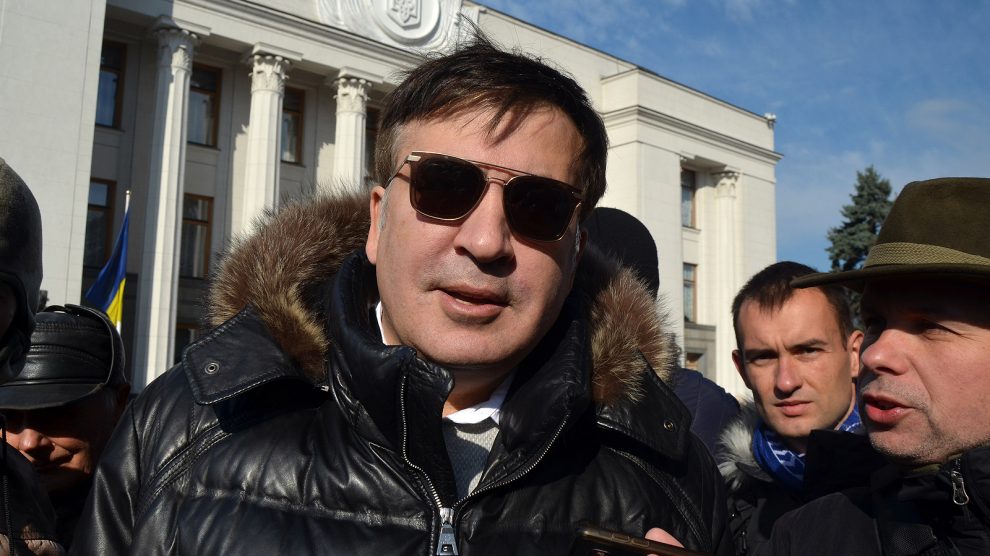 Mikheil Saakashvili’s return to Georgia last weekend – and his subsequent arrest – likely had little impact on the country’s local elections. In his absence, it appears, Georgia has moved on.

Several days before Georgia’s pivotal local elections, held on October 2, the country’s exiled former president, Mikheil Saakashvili, announced on his popular Facebook page that he would be returning to the country.

He even posted a photo of his airline ticket to Tbilisi: he was scheduled to arrive shortly after the polling stations closed.

Saakashvili, who led the Rose Revolution of 2003 and twice served as president but had lived in exile for more than eight years, had promised to return many times before, to – in his words – “lead the battle against [the current ruling party] Georgian Dream”.

Fearing arrest – in 2018 he was sentenced, in absentia, to six years in prison for abuse of power – he never made good on his promise.

This changed on the morning of October 1, when Saakashvili returned from Ukraine (a day earlier than advertised) hoping to make a political comeback in his homeland by leading the opposition movement to victory in the local elections.

He posted videos of himself in Batumi on the Black Sea coast, in which he urged his compatriots to vote for the United National Movement (UNM), the country’s largest opposition party which he founded and continues to, informally at least, lead.

It remains unknown how Saakashvili managed to enter Georgia unnoticed: the Ministry of Interior has emphasised that he did not cross the border through any official checkpoint.

Indeed, even as Saakashvili’s video from Batumi was going viral, ruling party officials were insisting that it was a “deep fake”.

Georgian Dream’s Executive Secretary Mamuka Mdinaradze even insisted that the video had been staged in the western Ukrainian town of Truskavets, causing even more confusion.

Soon, however, Prime Minister Irakli Gharibashvili declared that the “fugitive” Saakashvili had been arrested in Georgia, after which the authorities released a video of a smiling Saakashvili walking to prison in Tbilisi.

Saakashvili’s legacy in Georgia is divisive.

He is seen both as a flamboyant reformer who successfully dealt with corruption and as a semi-authoritarian leader who kept a firm grip on power.

As Georgian president, Saakashvili is credited with pushing through democratic reforms, for which he received praise and support in the West, but discontent during his time in office quickly grew among those Georgians impacted by his changes.

Over time, the charismatic and polarising Saakashvili accumulated many critics, who faulted him for his increasingly autocratic style of rule.

Since it was first elected in 2012, Georgian Dream has constantly referred to Saakashvili’s rule as the “bloody nine years”. Four criminal cases were subsequently opened against the former president.

In 2018, a court in Tbilisi sentenced Saakashvili to six years in prison for abuse of power, after he was also accused of trying to cover up evidence relating to the beating of an opposition lawmaker.

He also faces other charges stemming from his presidency, including a violent crackdown on a protest and a raid on a television station owned by a political rival.

While Saakashvili’s guilt is not in doubt for many people in Georgia, some major international political actors around the world have come out in support of him.

For instance, the European Conservatives and Reformists (ECR) group in the European Parliament has already urged the Georgian authorities to “drop the charges against Saakashvili and release him from custody”.

He even said that if Saakashvili did not behave, the ruling party would “add further articles [charges]”.

According to Kornely Kakachia, director of the Georgian Institute of Politics, there will likely be “more red flags for the West after statements by the Georgian prime minister that more articles or criminal charges will be added to Saakashvili’s case if he does not behave.”

“This type of statement should not be coming from the prime minister but the judiciary,” he says.

Did it affect the election?

The impact of Saakashvili’s return on the election results is not yet clear. Some argue that it encouraged opposition-leaning voters to vote. Others suggest it helped Georgian Dream mobilise its own voters.

What’s certain is that turnout was relatively high.

While in 2017 only 46 per cent of Georgia’s population were present at polling stations for local elections, in the October 2 vote the figure was 51 per cent.

Less certain is whether the United National Movement party benefitted. Its share of the vote rose from 28 per cent in last year’s parliamentary election to 30.7 per cent, and it did well in mayoral ballots in Tbilisi and other large cities such as Kutaisi, Rustavi, Batumi and Poti, forcing a run off vote on October 30.

“We could say that opposition voters were encouraged by his return,” says Giorgi Badridze, a senior fellow at the Georgian Foundation for Strategic and International Studies.

“For years a key argument of the government has been that Saakashvili was afraid to return and that if he did, he would cause public unrest. However, we saw that the former president did nothing but encourage people to vote.”

Gharibashvili certainly believes that  Saakashvili’s arrival helped the opposition, blaming it for Georgian Dream’s loss of support of around seven to eight per cent. The party nevertheless won close to 47 per cent of votes nationwide in the proportional race for city council seats.

However, some experts such as Thomas de Waal, a senior fellow at Carnegie Europe, suggest that the relatively small crowd protesting Saakashvili’s detention in front of Rustavi prison shows that Saakashvili’s popularity in his homeland has drastically decreased.

“Saakashvili underestimates how much Georgia has moved on since he left,” says de Waal.