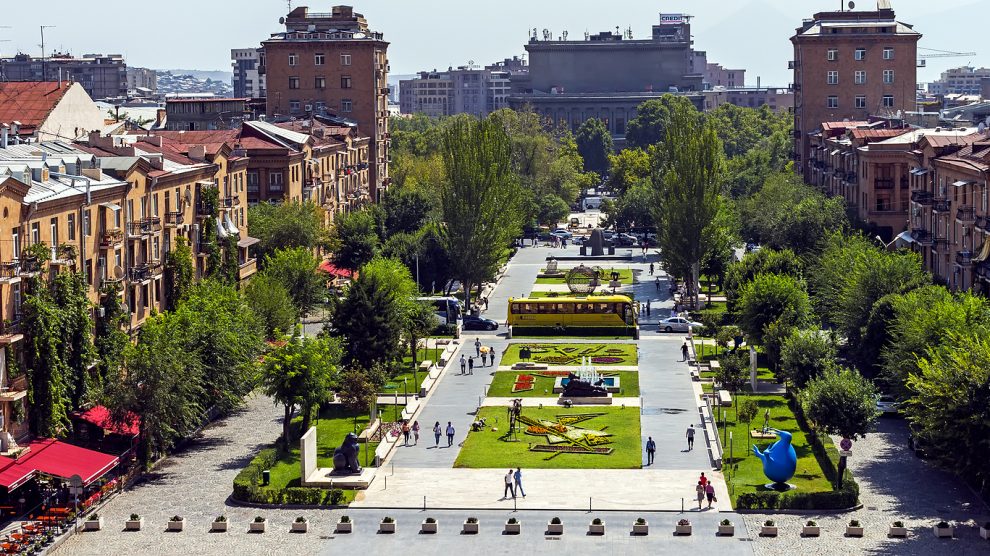 Since the end of last year’s war in Nagorno-Karabakh, both Iran and Turkey have proposed regional cooperation initiatives. These could, however, further undermine the region’s fragile security.

Since the collapse of the Soviet Union, the South Caucasus has been ravaged by conflict, despite several regional initiatives designed to put an end to war and pave the way for regional cooperation.

These proposals have included the Peaceful Caucasus Initiative, put forward in the 1990s by Georgia’s then-president Eduard Shevardnadze, the Caucasus Stability and Cooperation Platform – first proposed by Turkey’s Recep Tayyip Erdoğan when he was prime minister – and United Caucasus, an idea of Georgia’s former president Mikheil Saakashvili.

Even though these initiatives were seen as a win-win for all parties, none of them managed gain any traction, as they failed to receive the backing of the all major players in the region.

Last year, after the end of the Nagorno-Karabakh War, Erdoğan – now Turkey’s president – made a new proposal, to create a six-country regional cooperation platform, which would encompass the three states of the South Caucasus, Georgia, Azerbaijan, and Armenia, together with the region’s biggest neighbours: Turkey, Russia and Iran.

Pitching his idea in the Azerbaijani capital Baku, Erdoğan emphasised the need for a new initiative in the war-torn South Caucasus that would benefit all sides and could even “turn a new page in Turkey-Armenia ties”.

At the same time, Iran also made a proposal to create a similar six-party cooperation platform, known as the 3 + 3. Iranian Foreign Minister Javad Zarif visited Georgia, Azerbaijan, Armenia, Russia and Turkey to try and sell the idea,  and to consult their leaders on how to “coordinate on regional issues”.

The two initiatives have met with mixed reactions. While Russia and Turkey (and to a lesser extent Azerbaijan) showed much enthusiasm, Georgia and Armenia have been wary as they view them as a potential new threat.

A tool for influence

Moscow, which has increased its military presence in the South Caucasus since the end of the Karabakh war, has been particularly keen on the idea. On October 6, Russian Foreign Minister Sergey Lavrov even made an announcement that Moscow was committed to the establishment of a new 3+3 format to “address the issues of security, unblocking economic and transport ties”.

Russia sees the initiative as a new opportunity to reassert its influence in the South Caucasus and undermine what it views as  “western encroachment” in its zone of “special interest”.

According to Emil Avdaliani, director of Middle East Studies at Geocase, a Tbilisi-based think tank, Russia would gain a great deal as the initiative “would strengthen Moscow’s economic and political position in the South Caucasus, and remove alternatives to the Russian vision of the geopolitical order”.

”Moscow would use it for blocking external, non-regional players,” he tells Emerging Europe. “The platform is an efficient tool for Moscow to close off the South Caucasus from the collective West. The Kremlin wants to achieve this with the help of other regional powers – Iran and partially Turkey. Moscow aspires to build what I would call a hierarchical order where Russia will be a primary player but will be acknowledging the basic interests of Iran and Turkey.”

Iran would similarly profit from the initiative, especially considering the outcome of the war. The ceasefire agreement increased the Russian and Turkish presence in the region, but left Tehran as a bystander.

The South Caucasus has special geostrategic importance for Tehran as it is a gateway to the Black Sea and Europe through Armenia and Georgia. Closer cooperation with the states of the South Caucasus is a key priority for Iranian foreign policy.

The 3+3 or six-party cooperation format would boost Iran’s strategic location as it sits astride two important trans-continental transportation corridors: the North-South Corridor and the Persian Gulf–Black Sea Transit Corridor.

“Railways and road infrastructure projects could be implemented which will allow more penetration by Iran into the region. However, the geopolitical constraints the Islamic Republic faces will remain in place,”Avdaliani says.

Similarly, the initiatives would benefit Turkey, which has recently started to expand its regional influence.

For instance, Turkey, along with Azerbaijan, has been pushing for the construction of a transport link between Azerbaijan and Turkey via southern Armenia that could solidify Ankara’s transport connection with the South Caucasus and at the same boost the region’s geo-economic importance, something that largely attracts Azerbaijan too.

Georgia and Armenia meanwhile view the initiatives put forward by Turkey and Iran as a threat, even though both are ostensibly focussed on cooperation in the areas of economy and transport.

Armenia has serious concerns due to what it views as the unfavourable outcome of the Karabakh conflict.

Post-war border tensions between Baku and Yerevan have further undermined the prospect of a lasting peace between the two countries, deepening the sense of insecurity in Yerevan.

A substantial issue for Armenia has been the interpretation of the term “corridor” mentioned in Article 9 of the ceasefire agreement.

While Azerbaijani side has argued that the document gives it the right to establish an overland transit route linking mainland Azerbaijan with its Nakhchivan exclave via southern Armenia’s Syunik province, Armenia has claimed that the term “corridor” refers only to Lachin, a narrow strip which connects Armenia with Nagorno-Karabakh.

Comments from Azerbaijani President Ilham Aliyev that the southern regions of Armenia used to be the “ancestral land” of Azerbaijanis have exacerbated the situation.

The proposed cooperation platforms are even more concerning for Georgia as they do not comply with the country’s national interests.

Russia continues to occupy one-fifth of Georgia’s internationally recognised territory, the regions of Abkhazia and South Ossetia, where occupying forces have demarcated administrative lines, an illegal process known as “borderisation”.

Moreover, the Russian presence (and at the same time absence of the EU and US) makes it even more difficult for Tbilisi to become a member of the initiative. Tbilisi has long sough both EU and NATO membership – a policy supported by the overwhelming majority of the country’s population.

“As a country which pursues NATO and EU membership and considers becoming part of the West as the historical mission of the Georgian people will see a diminution of its chances if Russia manages to impose the 3+3 order in the South Caucasus. The net result is that facing Russia alone, without western support, will doom Tbilisi’s aspirations to re-integrate occupied Abkhazia and Tskhinvali [South Ossetia],” says Avdaliani.

Alexandre Petriashvili, a senior fellow at the Georgian Foundation for Strategic and International Studies, also thinks that the initiative is a threat for Georgia and that if the country is somehow dragged into it, Georgia would be confronted by its biggest enemy – Russia.

“A new crack could emerge between Georgia and its western partners, and Georgia would function as a territory for the interests of others rather than as a fully-fledged partner,” he says.

Romanians queue for Covid-19 jabs as Bulgarians remain reluctant, despite death toll
Why Estonia and Hungary were so reluctant to agree to OECD’s minimum tax rate
Comment