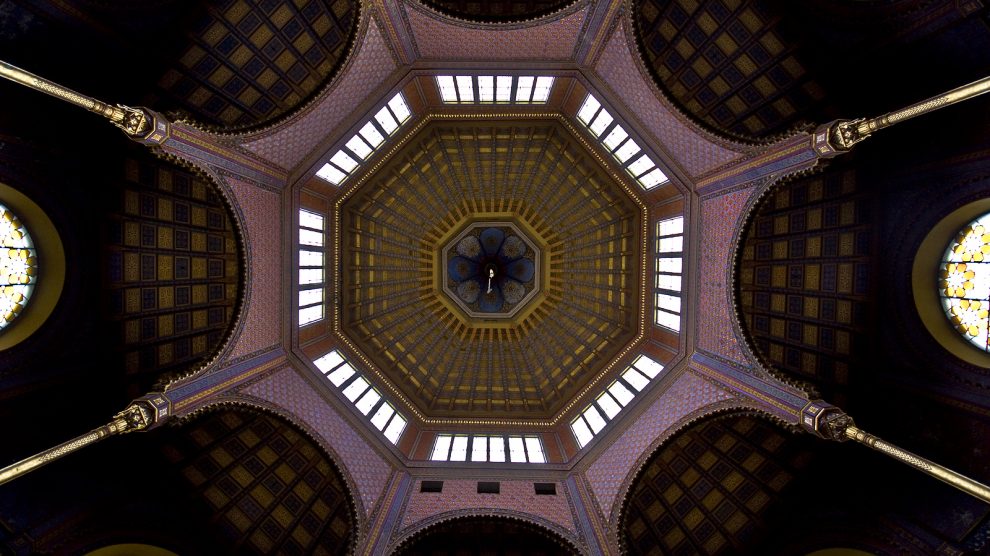 One of the most spectacular synagogues in Europe has reopened as a place of worship for the first time since the 1950s.

The Rumbach Synagogue in Budapest has been rededicated with the reception of its inaugural Torah scroll.

The synagogue — named after the street in the Hungarian capital on which it stands – was built between 1869 and 1872 to the designs of Viennese architect Otto Wagner in a Moorish style similar to the city’s Great Synagogue, the largest Jewish house of worship in Europe and second-largest in the world, just around the corner in Budapest’s 7th district.

Prior to World War II, the entire area was a predominantly Jewish neighbourhood.

In 1941, the Rumbach was used as a deportation point for 20,000 Jews — including many refugees who had fled Poland after the Nazi invasion – who were eventually sent to Kamianets-Podilskyi in Ukraine and executed.

The building was partially destroyed during the war and had not been used for religious purposes since 1959. The synagogue’s last rabbi left Hungary after Soviet tanks put down the 1956 uprising.

The synagogue passed into private hands in 1989 but was returned to the Jewish community in 2006.

The revamp of the synagogue was financed with a 9.2 million euros grant from the Hungarian Prime Minister’s Office and the Human Capacities Ministry. In April 2020, the Hungarian National Committee of ICOMOS (International Council on Monuments and Sites) awarded its annual restoration prize to the synagogue.

‘Prayers will be heard’

“After 70 years of neglect a new multifunctional space has been built where prayers will be heard, the Jewish community can develop; and it will also house fantastic cultural, public education and tourism events,” András Heisler, president of the Federation of Hungarian Jewish Communities (Mazsihisz), said at the opening.

“A link between the material world we live in and the spiritual world that lives inside us has been created,” Chief Rabbi of Hungary Róbert Frölich added.

Frölich told The Times of Israel that the building’s roof had rotted so badly that birds had taken up residence in the sanctuary.

“We tried to mix the old with the new,” synagogue director Henriett Kiss told The Times of Israel. “The House is a sprawling compound behind a decadent patterned brick facade, enveloping either side of the enormous sanctuary.”

In addition to its religious function, the Rumbach in its new incarnation emerges as a Jewish cultural centre welcoming all denominations and faiths.

The history of the Jews in today’s Hungary stretches back to an era predating the Magyar conquest of the Carpathian Basin in 895 by over 600 years. At its peak in the early 20th century, the community represented around five per cent of Hungary’s population and 23 per cent of the population of Budapest. However, of around 400,000 Jews in Hungary at the outbreak of the war, only a third survived.

Of the many memorials in Budapest to those Jews killed during the war, perhaps the most moving is the Shoes on the Danube Bank, sixty pairs of period-appropriate shoes cast out of iron on the east bank of the river.

It honours the Jews killed by the Hungarian fascist movement, the Arrow Cross, in January 1945. Around 3,500 were brought to the river bank, ordered to take off their shoes, and were shot at the edge of the water so that their bodies fell into the river and were carried away.

Hungarian census data from 2011 revealed that 10,965 people (0.11 per cent of the population) self-identified as religious Jews, of whom 10,553 (96.2 per cent) declared themselves as ethnic Hungarian.

As a whole, including secular Jews, the Hungarian Jewish community now numbers around 100,000 people.