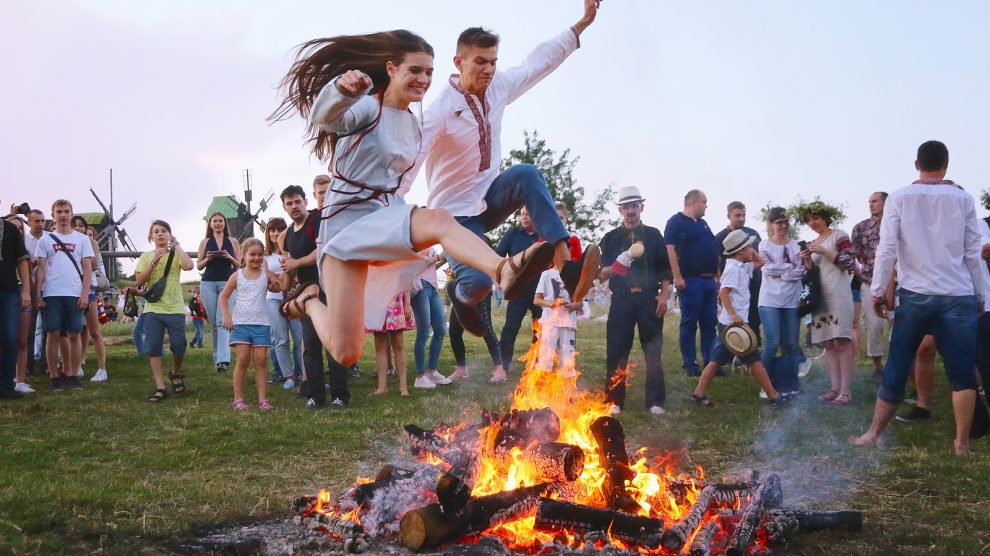 Midsummer in much of Ukraine, Belarus, Russia and parts of Poland means Ivana Kupala, a holiday which provides a fascinating glimpse into the pre-Christian traditions of the East Slavs.

Throughout the world, ancient peoples recognised the significance of the sun. The ancient Slavs were no different: like many other cultures around the world, they created elaborate mythologies and rituals expressing their reverence to the sun. One of these was Ivana Kupala, which marks the summer solstice.

Ivana Kupala is celebrated primarily in Russia, Ukraine, Belarus and Poland. And while the ritual has been morphed, adapted and distilled over the centuries, it is nevertheless a fascinating glimpse into the pre-Christian traditions of the East Slavs and is the backdrop for Nikolai Gogol’s short story, The Eve of Ivan Kupala.

Originally, Ivana Kupala (probably first known as just Kupala) was a ceremonial folk gathering which was dedicated to the ancient Slavic sun gods Yaril, Dazhbog and Svarog. Following the adoption of Christianity by the East Slavs at the end of the 10th century, the newly-established church began cracking down on pagan traditions. However, as with Emperor Constantine who institutionalised Christianity in the Roman Empire and merged pagan holidays with Christian meanings, the church eventually appropriated Ivana Kupala for its own ends.

The church combined the celebrations of Kupala with the feast of St John the Baptist, giving the celebrations its modern name of Ivana Kupala (Ivan being the Slavic form of John). This also caused it to lose its astronomical significance: while the actual solstice falls on the night of June 20-21, the “Christianisation” of Ivana Kupala moved the holiday to the night of July 6-7 (June 23-24 in the Julian calendar used by the Eastern Orthodox Church). In Poland, however, it is still celebrated on the original day.

Banned by Catherine the Great

The holiday has seen varying levels of acceptance and tolerance throughout the centuries. Some leaders attempted to persecute people who celebrated it. Russian Empress Catherine II banned it. Church officials viewed the sexual undercurrents of Ivana Kupala with disdain.

In an iconic scene from Andrei Tarkovsky’s classic Andrei Rublev, the main character, a monk, stumbles upon a group of pagans celebrating Ivana Kupala in a forest and finds himself face to face with a half-naked woman. He rebukes her for demonstrating a “base, soulless, ephemeral” type of love, contrasted with the “brotherly” love of the church.

“What’s the difference? It’s all love,” she responds, kissing him.

By the late 20th century, with Soviet social engineering projects attempting to create a new type of person unbound by the false consciousnesses of religion, nationality and ethnic identity, Ivana Kupala – in the USSR at least – had all but been forgotten.

However, in rural areas in particular, there has been resurgence of interest in the primordial traditions of the various post-Soviet peoples since the USSR’s demise. This precipitated a revival of Ivana Kupala – now, once again, a popular festivity.

Despite the appropriation of the holiday by the church, the rituals, beliefs and symbolism have changed little: Ivana Kupala still revolves around love, fertility and purification.

On the morning of Ivana Kupala, it is customary to swim in rivers and lakes to cleanse the body and soul of evil. In the evening, communities build bonfires, normally on hilltops.

At night, people are not supposed to sleep, as it is believed that evil spirits such as mermaids, werewolves and witches will be freely wandering about. Instead, communities come together to carry out various rituals throughout the night. Young men are encouraged to jump over the bonfire to test their bravery and resolve. Couples do the same – according to folklore, if a couple successfully jumps over a bonfire with their hands still intertwined, it is considered a good omen for the future of the relationship. 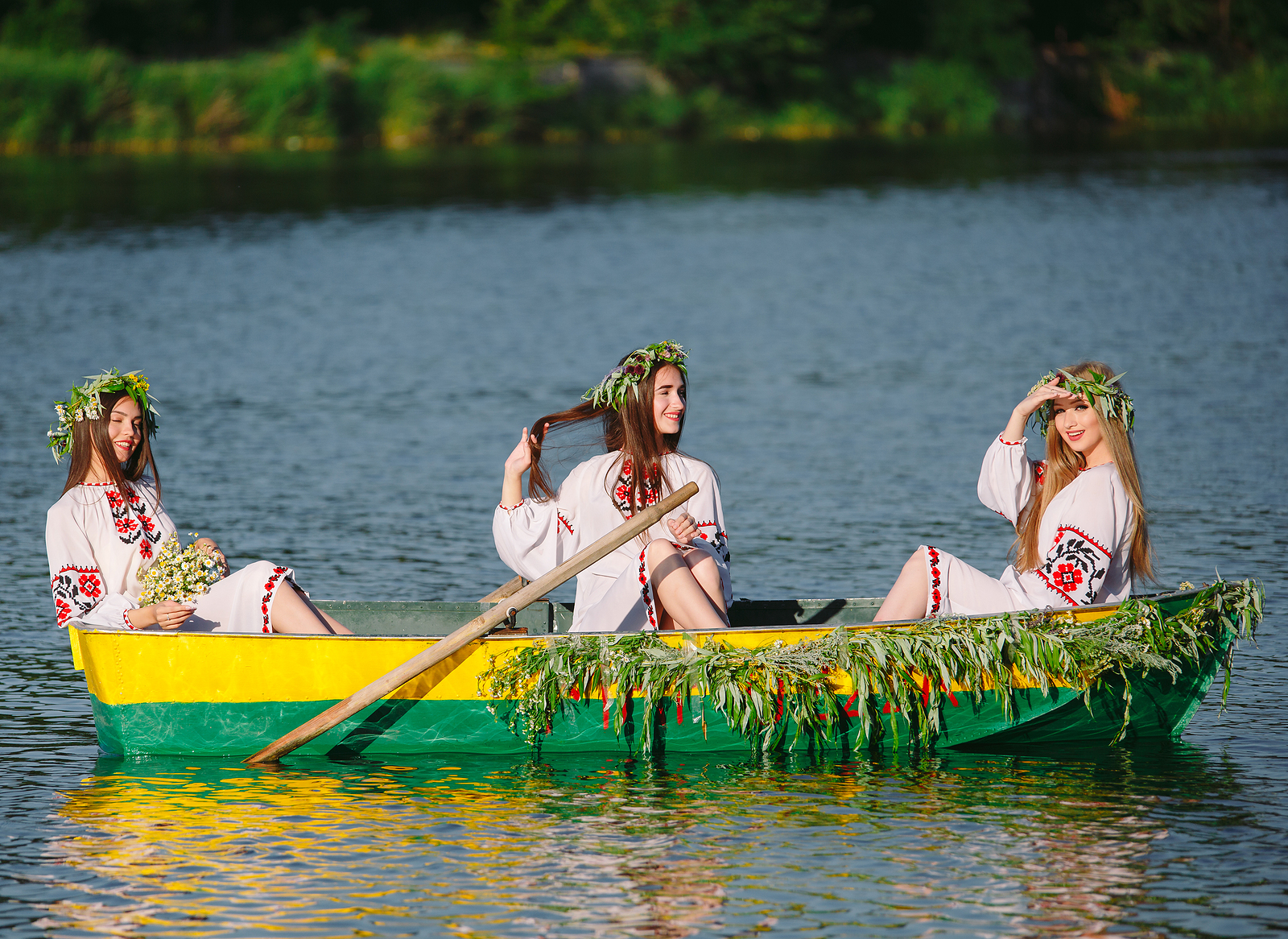 People are encouraged to throw old, unneeded possessions into the fire. If children are sick, parents throw some of their clothes into the bonfire, with the belief that this will make the child recover quickly. Cattle are chased around the bonfire to protect them from disease.

Young unmarried women make elaborate wreaths out of flowers, weeds and straw and wear these on their heads. In the evening, the women float the wreaths on a lake or river – if the current takes the wreath away into the water, it is considered a good omen for finding love. The wreath sinking or being drawn to the shore is considered to be a bad sign.

Young men then try to collect the floating wreaths, to tie their romantic fate to the women who made them. Youths of both sexes (with girls going first) also go into the forest to look for ferns. According to tradition, a person who finds a fern on Ivana Kupala will temporarily gain the ability to communicate with animals and heal the sick.

The holiday ends with communities gathering around the bonfire, holding hands and singing songs until dawn.

Today, Ivana Kupala is again a relatively popular holiday. Many city folk in Russia, Ukraine and Belarus make trips to the countryside to observe the rituals. And while much of the religious and spiritual significance has faded away, the holiday remains an enduring symbol of the pre-Christian culture of the region.