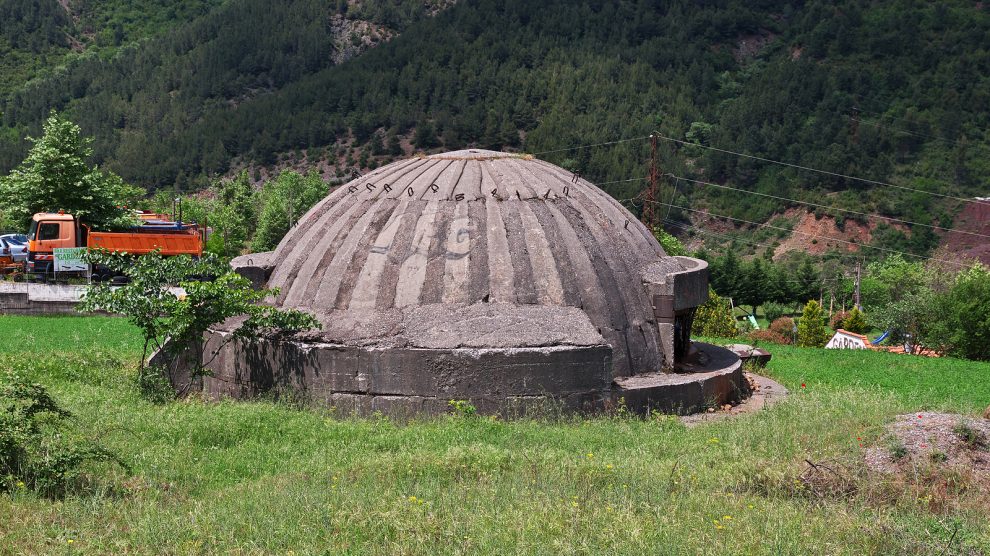 Albania’s bunkers are the country’s most enduring reminders of the brutal, surreal and quixotic rule of Enver Hoxha.

For much of the 20th century, Albania was dominated by one figure: Enver Hoxha.

The dogmatic partisan-turned-dictator left a strong imprint, which is most visible in the famous bunkers dotting every part of the country.

For perspective, at the time of Hoxha’s death in 1985, Albania’s population was just under three million.

The idea was that in the event of an invasion, the entire population could be mobilised to defend the country.

The round, mushroom-shaped bunkers continue to dot the mountainous countryside and watch over the Adriatic coast.

Many were even built in front of apartment buildings, with the expectation that residents would use them as fighting positions.

These ranged in size from small units, capable of holding one or two people, known as Qender Zjarri (firing positions) to larger command posts known as Pike Zjarri – designed to shelter hundreds of people.

Today, most of the bunkers are still standing, enduring relics of the isolationism and paranoia that defined the four-decades-long rule of Hoxha.

Many have been converted into tattoo parlours, restaurants, swimming pools and even homes. Perhaps the most famous, known as Bunk’art, located in the country’s capital, Tirana, is now a museum and art gallery.

In many ways, these have become woven into the fabric of modern Albania and are now one of the main curiosities attracting tourists to the country.

Albania’s experience in World War II provided a large part of the rationale for the bunkerizimi (bunkerisation) programme.

Albania’s small military had been easily defeated by fascist Italy over the course of five days in 1939, leading to Albania’s annexation into the short-lived Italian Empire.

A mixture of communists and nationalists resisted the fascist occupation – Hoxha was among these partisans and over the course of the war he realised firsthand the military utility of a fully-mobilised population.

Hoxha became Albania’s leader shortly after the country’s liberation in 1944.

And although his first decades in power saw substantial social and economic progress – major strides were made in women’s rights, the country was rebuilt and became the first fully-electrified nation in the world despite having been devastated in the war, malaria was virtually eradicated and adult literacy shot up from five to over 90 per cent – Albania became a hermit country.

Hoxha was openly hostile to both of its neighbours, fearing Yugoslavian chauvinism and Greek irredentism over the historical territory of Epirus.

An admirer of Joseph Stalin, Hoxha severed relations with the Soviet Union over what he deemed to be “revisionism” during the rule of Nikita Khrushchev, adding another potential invader to his paranoia-fuelled list.

He had effectively made enemies of NATO, the Warsaw Pact and non-aligned Yugoslavia.

As such, fuelled by this paranoia and an insatiable obsession with national self-sufficiency, Hoxha based Albania’s military doctrine around a fully-mobilised population.

Men completing their mandatory military service would take their service rifles home with them (without ammunition of course) and roughly a quarter of the country’s entire population at any given time was either in active military service, in the reserves, or in youth militias.

The bunkers became a cornerstone of this doctrine. However, they were not without controversy. The sheer number of bunkers built over a 20 year period (mainly during the 1970s) meant that billions of US dollars were expended.

Some estimate that up to 100 workers died every year constructing the bunkers. Furthermore, their actual military utility was always questionable.

General Beqir Balluku, then minister of defence, was executed in 1975 for vocally opposing the programme and arguing that Albania would be better served with a smaller but well-equipped and professional military instead of a poorly-armed “people’s army”.

In a 1974 speech he also expressed his belief that the bunkers themselves were impractical and a waste of money.

This notion has led some analysts and historians to believe that the bunkers were not constructed for military purposes, but rather to entrench a siege mentality into the population, which would be conducive to Hoxha’s authoritarian and isolationist regime.

Hoxha died before the cataclysmic invasion he had been planning for and anticipating happened, and the bunkers were never put to the test.

Despite the early progress made under his rule, by the time of Hoxha’s death, Albania was one of the poorest countries in Europe. It was more isolated than ever, cutting ties with China, its last ally, over China’s detente with the United States.

Today, Hoxha’s reign is remembered primarily negatively. His heavy-handed totalitarianism and intolerance to dissent or criticism won him many internal enemies.

His extensive crackdowns against organised religion and strict adherence to state atheism alienated both Muslim and Christian Albanians.

Contemporary Albania has long decided to move on.

However, the bunkers remain an enduring symbol of Hoxha’s Albania. And though we (hopefully) may never know just how useful they would have been in an actual war, they certainly make good art galleries.

Why do Eastern European and Central Asian oligarchs love London?
Could new Romanian law lead to ‘massacre’ of bears?
Comment