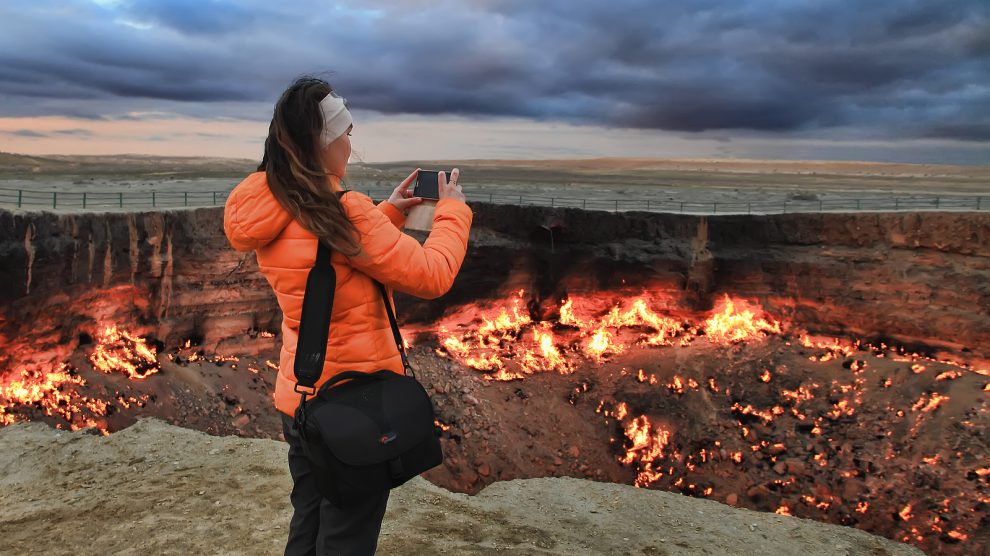 Turkmenistan’s president, Gurbanguly Berdymukhammedov, has ordered that the country’s most famous sight, the Darvaza gas crater, or Gates of Hell, be ‘closed’.

Broadly speaking, little is known of Turkmenistan. Despite being larger in size than Germany, the former Soviet republic has the smallest population in Central Asia. Furthermore, it is one of the least visited countries in the world, with costly, time-consuming visa processes deterring most travellers.

Consequently, according to estimates by the UN World Tourism Organisation, Turkmenistan has averaged fewer than 10,000 visitors per year for the past two decades. Since the outbreak of the Covid-19 pandemic, it has had no visitors at all.

What we do know of Turkmenistan is limited to the whims and eccentricities of its autocratic leader, Gurbanguly Berdymukhammedov. Even if few people outside Turkmenistan can recall his name, Berdymukhammedov – who has ruled the country since 2006 – has become a figure of fun around the world for his unconventional behaviour, bizarre PR stunts and outrageous cult of personality.

He was back in the news this week having announced that he plans to “close” the so-called Gates of Hell, a desert sinkhole filled with gas which has burnt for decades and which – in the days when Turkmenistan allowed at least some foreigners to visit – was one the country’s few real attractions.

The sinkhole was formed in the early 1970s, when the ground collapsed during a Soviet gas drilling expedition. Scientists reportedly lit the massive hole on fire to prevent the spread of natural gas, expecting it to burn out within a few weeks. Instead, it has been burning ever since.

Berdymukhammedov has now asked his government to find a way to put the fire out, according to state-run newspaper (there is no other kind) Neytralny Turkmenistan, citing damage to the local environment and public health, as well as the waste of valuable natural gas resources.

But while closing a major tourist attraction might seem counterintuitive, but is in keeping with Berdymukhammedov’s idiosyncratic behaviour.

A former dentist and minister of health, Berdymukhammedov was elected president in 2006 (in an election featuring no genuine opposition candidates) following the death of his even more bizarre predecessor, Saparmurat Niyazov. (One of Niyazov’s crazier policies was to rename the months of the year: April, for example, was named after his mother).

While Berdymukhammedov quickly reversed such nonsense (the months of the year reverted to their original names), his 16 years in office have regularly provided cause for much mirth and mockery.

He DJs live sets on television. He has performed allegedly self-written rap songs alongside his grandson. He gifted a puppy to Russian President Vladimir Putin. Jennifer Lopez sang at his 56th birthday party in the Turkmen capital Ashgabat. (She was later forced to apologise).

In a promotional film, Berdymukhammedov visits an army base. The video opens by showing his gold Mercedes truck rampaging through a dirt road at high speed. A mechanical ladder positions itself by the truck’s golden door, which slowly slides open to reveal Berdymukhammedov, looking like a villain in a Steven Seagal movie.

Towards the end of the video, Berdymukhammedov is shown expertly controlling a bicycle with one hand and shooting a pistol with the other.

Berdymukhammedov is also regularly photographed and filmed riding horses, although in 2013 when he fell from a horse during a race in which he was competing, the video was censored. The episode is described in detail by Norwegian travel writer Erika Fatland – who was present – in her brilliant book Sovietistan:

“No one smiled, no one cried. Had we just witnessed the death of a dictator? Was there a heated discussion going on at this very moment about who should succeed the dentist president?”

Fatland, alongside every one else who was there, had her phone and camera checked for footage of the incident before being allowed to leave the racetrack, and then again when she left the country a couple of days later. Somebody managed to get it out, however.

Beneath the eccentricity, a dictator

Beyond the outlandishness, Berdymukhammedov is a typical authoritarian dictator. Ministers are fired live on TV. No dissent is tolerated, and according to Human Rights Watch (HRW), which published its latest report this week, the country tightly controls access to information, severely restricts media and religious freedoms, and allows no independent monitoring groups.

Independent activists, including in exile, and their relatives are subject to government reprisals. Dozens of people are victims of enforced disappearance. The government continues to interfere with people’s right to freedom of movement.

Then there is Covid-19. The country remains among the few countries without a single registered Covid-19 case, despite credible reports clearly indicating otherwise.

Media outlets report that hospitals are overwhelmed with patients with Covid-19 symptoms and there is a serious shortage of drugs to treat them. The number of Covid-19 deaths is unknown. Turkmen.news, a Netherlands-based outlet, created an online memorial to 55 people who died of Covid-19 like symptoms.

The government-imposed lockdowns in some districts in August, expanded them in September throughout the country, and continued to threaten and jail people for openly demanding access to information about the spread of Covid-19. The authorities continued to require the burning of harmala plants in such public spaces as hospitals, shops, and the like, alleging, with no evidence, that the smoke has disinfecting properties.

Vaccination is mandatory for all citizens above 18: In August, Radio Azatlyk, the Turkmen-language service of the US government-funded Radio Liberty, reported that authorities in Lebap region fined people and threatened to withhold pensions for refusing to be vaccinated.

With notable exceptions such as Eurasianet, mentions of Turkmenistan in the international media are sadly limited to Berdymukhammedov’s eccentricities, such as this week’s decision to “close” the Gates of Hell – something that may not even be possible.

Besides, he has ordered its closure before, a decade ago, to no avail.

It is therefore perhaps time for the world’s press to realise that there is more to Turkmenistan than Berdymukhammedov’s buffoonish antics and bizarre public persona: they would do well to begin covering the more unsavoury aspects of what is a truly despicable regime.