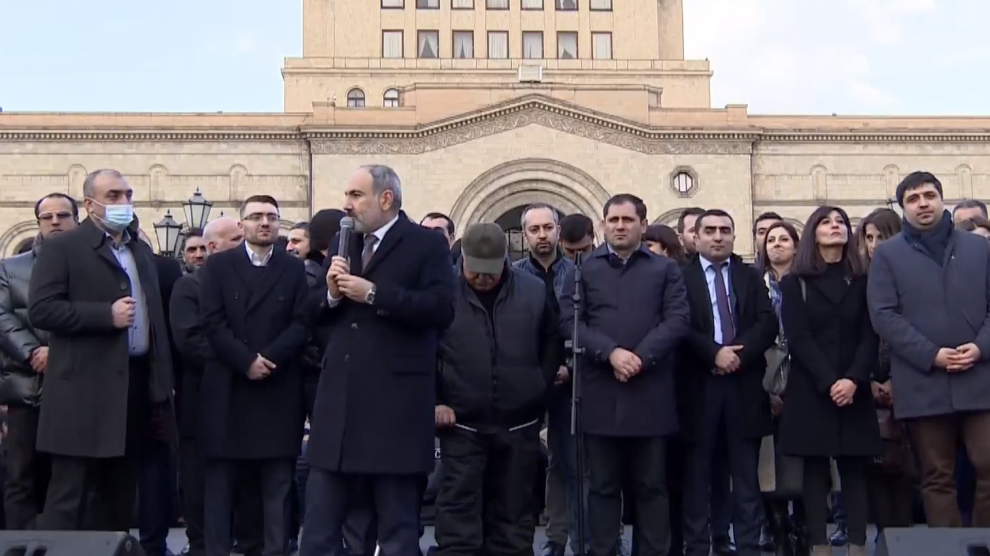 Facebook is the lifeblood of modern Armenian politics, particularly so since Prime Minister Nikol Pashinyan took office in 2018. As is his wont, the prime minister regularly “goes live” to his followers, musing on everything from tax policy to constitutional law. During the recent war in Nagorno-Karabakh, Facebook was also the platform of choice for his efforts to rally the nation.

February 25 marked a new feat for the role of Facebook in Armenian politics however, as the Chief of the General Staff of the Armenian Armed Forces Onik Gasparyan, along with nearly four-dozen other senior members of the military, issued a statement via the site calling on the prime minister to resign.

The spark for this unprecedented action was the dismissal the previous day of the deputy chief of the general staff, which was prompted by a personal disagreement with the prime minister. These related to claims about the efficacy of military equipment during the recent Karabakh War.

A number of commentators were quick to question whether this statement was a first move in a potential military coup. This is certainly how Pashinyan interpreted the statement, and he soon issued his own plea – via Facebook – for his supporters to rally en-masse later that day.

No subsequent moves were made by the military, and there is yet to be any evidence that plans were afoot for anything beyond the statement itself. The EU refrained from using such language in its own statement, calling instead for calm. The US Secretary of State’s Spokesman, Ned Price, meanwhile, categorically ruled out interpreting it as a coup, or even an attempted coup.

Since the November 9 ceasefire that brought an end to the war in Nagorno-Karabakh, successive elements of Armenian society have called on the prime minister to resign, with a view to fresh elections.

These have come from the opposition, the church, the president, and civil society. Clearly each of these groups and institutions occupy positions very different to that of the military in the constitutional order of Armenia, but there is an element of this statement fitting within that wider pattern – the military top brass being the final layer of society not to have offered its view.

Events that played out in Yerevan on February 25 must be seen within the wider context of a failure to develop any consensus and stability within domestic politics following the war and the signing of the November 9 trilateral statement. Nagorno-Karabakh is a neuralgic issue for Armenia and Armenians. The defeat in November has been a heavy blow materially and emotionally to the nation.

War and the defeat also came at a time of heightened political tensions in Armenia. When Azerbaijan, with the aid of Turkey, decided to launch its military offensive on September 27 last year, Armenia was still in the grip of sensitive changes to the membership of its Constitutional Court, was undertaking a number of high profile criminal cases against the country’s former leadership, and was continuing to embark on an ambitious anti-corruption agenda, with all the inevitable fallout.

Within this dynamic, Nagorno-Karabakh and the defence of the nation was one of the few, if perhaps the only, unifying issues across the newly wrought political divide. Since November 9, that unity has been lost.

The European Union has been quick to respond to this latest development, with statements issued by its high representative’s office and a number of interested parties within the European Parliament. Such interest is welcome but it comes a little too late and with the wrong focus.

These latest events represent a collective failure to find a way forward in Armenia following the war. The EU has barely engaged, and beyond a brief statement from its high representative following the ceasefire in November last year, there has been no sense of vision or a desire from the EU to try and involve itself in a meaningful way in the post-war settlement.

Neither has it gone unnoticed that whilst the EU has offered a speedy response in these circumstances, it has stood by silently on the issue of Armenian POWs, of which at least 150 are still being detained by Azerbaijan. This, despite an agreement from last December that was supposed to see both sides return all POWs on an “all for all” basis.

The latest scenes from Yerevan are a reminder of the urgent need to find a way forward. Fresh elections seem the only route to offering some sense of closure and a means to letting Armenian society feel that there has been an opportunity for some form of political accountability following the war.

The EU should be doing all it can to aid that process. This means engaging with many of the difficult issues that underpin the crisis, even if the EU might find it easier to ignore them.

Seeking a role for Europe and the US in the peace, via the Organisation for Security and Co-operation in Europe (OSCE) most likely, should be its ultimate goal, but using its voice to apply pressure on Baku to have all Armenian POWs released, a bare minimum for building trust, should be the start.

William Lavender is policy and advocacy officer at European Friends of Armenia, a Brussels-based NGO which aims to promote cooperation between the European Union and Armenia.