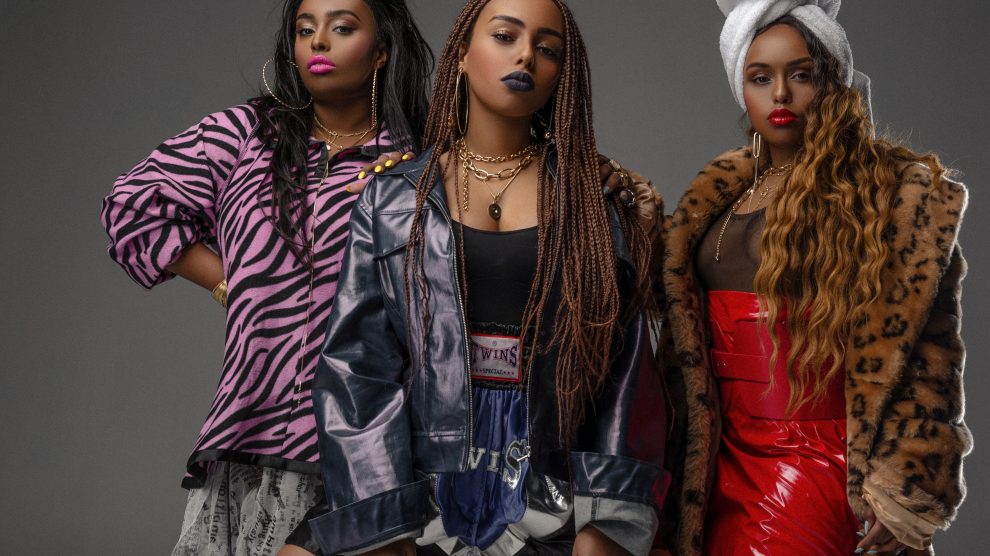 Afro-Ukrainian hip hop trio Fo Sho has quickly become one of the most exciting and recognisable names on the blossoming Ukrainian music scene.

Few would imagine that in Ukraine, there would emerge a rap group that looks and sounds like peak Destiny’s Child fused with Migos.

Perhaps this is why, just over two years after embarking on their musical careers, the three Ethiopian-Ukrainian sisters, Bethlehem (Betty), Miriam and Siona Endale have already left an imprint on the Ukrainian hip-hop scene.

They’ve made appearances at Atlas Weekend, Ukraine’s largest music festival. Their music videos have already racked up well over a million collective views on YouTube. They reached the semi-finals of Ukraine’s Eurovision auditions, earning enthusiastic praise from the judges, only losing out to eventual winners Go_A. And they have already performed at international music festivals in Vienna and Hamburg.

At live shows, their energy and chemistry is palpable. They take turns rapping snarling, hard-hitting verses, while the others ad-lib. They harmonise intermittently, showing remarkable vocal range. They often sing their choruses in unison, their voices blending together seamlessly. And there is virtually nothing quite like it on Ukraine’s current music scene.

The three sisters’ parents first came to Kharkiv in 1985, as medical students. However, by the time they finished their studies, Betty, the eldest of the sisters, was already beginning school. As such, the parents decided to stay in their newly-adopted country and began working as doctors.

Remarkably, the sisters come from an Ethiopian Jewish family. Known as Falasha or Beta Israel in Amharic, according to legend this little-known community traces its lineage back 3,000 years to a union between King Solomon of Israel and the Queen of Sheba, the latter widely believed to be Makeda, a queen of ancient Ethiopia.

The vast majority of Ethiopian Jews have immigrated to Israel over the last 40 years, making it even more remarkable that the Fo Sho sisters’ family decided to settle in Ukraine. Betty even attended a Jewish school in Kharkiv. “Everybody was shocked,” she says about her school days. “Like they’d say, ‘why is she studying here? Why is she black?’”

Growing up, the girls were initially exposed to just Ethiopian music by their parents, who played the stalwarts of the golden era of Ethiopian music, like Aster Aweke, Mahmoud Ahmed and Tilahun Gessesse.

“But we didn’t exactly download these songs onto our MP3 players,” says Miriam. “Betty would buy CDs of Beyonce, Destiny’s Child, Christina Aguilera and hide it from our parents.”

The girls’ musical talent was apparent from an early age. Miriam and Siona were enrolled in an art lyceum and are classically trained in the violin and piano, respectively.

In contrast, Betty initially pursued a more conventional path, going from Jewish school to dental school and even working for some time as a dentist. She juggled this with her budding music career, serving as a backup vocalist for some Ukrainian pop musicians.

Finally, in early 2019, the girls embarked on their joint career. “It was very unexpected,” says Siona, the youngest of the three. “We all had different ambitions. I wanted to be a soloist. Miriam was studying economics and business at a university. But I’m happy we’ve come to this.”

Their debut music video, Xtra, shows this bit of their background. Betty is dressed in dentist’s scrubs, Miriam as an office worker and Siona in a school uniform.

Instantly, they made waves in Ukrainian music. Barely a year after formally starting their careers, they were invited to participate in the qualifiers to represent Ukraine at Eurovision 2020. However, while their unique background helps them stand out and get noticed among Ukrainian artists, it also came with its downsides.

“During the qualifiers, some people would ask us if we think it’s right for us to be representing Ukraine,” Miriam tells Emerging Europe. “They spoke to us as if we weren’t citizens, as if we’re illegals, as if we just came here one day and decided ‘OK, let’s represent Ukraine’. Like we’re extraterrestrials.”

This comes from the rather antiquated notion of ethnicity and nationality being inextricably linked, which is fairly common in Ukraine. Although the girls are fluent in Russian and Ukrainian, and have lived in Ukraine their entire lives, they nevertheless unfortunately feel singled out sometimes. As such, they have adopted a more universalist philosophy.

“For us, being a good person is what’s most important. Ethiopia, Ukraine, Israel, these are all our cultures” says Betty. “But in the Eurovision qualifiers, we were there to represent Ukraine. We are from here, we grew up here. We were made by this country.”

Furthermore, navigating Ukraine’s confusing legal environment has been challenging for the girls. “Copyright laws are poorly monitored,” explains Siona, “For example, if our song is played on a TV channel, there is no guarantee that we will receive royalties. But having to deal with this makes us stronger. Today a musician can’t just make music. They also have to be a lawyer, a blogger, a stylist.”

Despite these challenges, however, the girls believe that the Ukrainian music industry is on the upswing.

“There was a time when Russia and Ukraine had basically a large unified entertainment industry,” Siona tells Emerging Europe. “Then it was very difficult for young Ukrainian artists to break through, as they were swallowed by the much larger and wealthier Russian industry.”

This is paving the way for acts like Fo Sho to establish themselves on the Ukrainian music scene. With rap more popular than ever among anybody under 40, and particularly with the younger generation, the sisters are well-poised to becoming stars. Furthermore, there is much to be excited about in Ukraine’s budding music industry, according to the girls.

“We are more independent now, thank God,” says Betty. “But there is still a lot of work to be done. Ukraine has a lot of potential and I’d love to see us capitalise on this.”