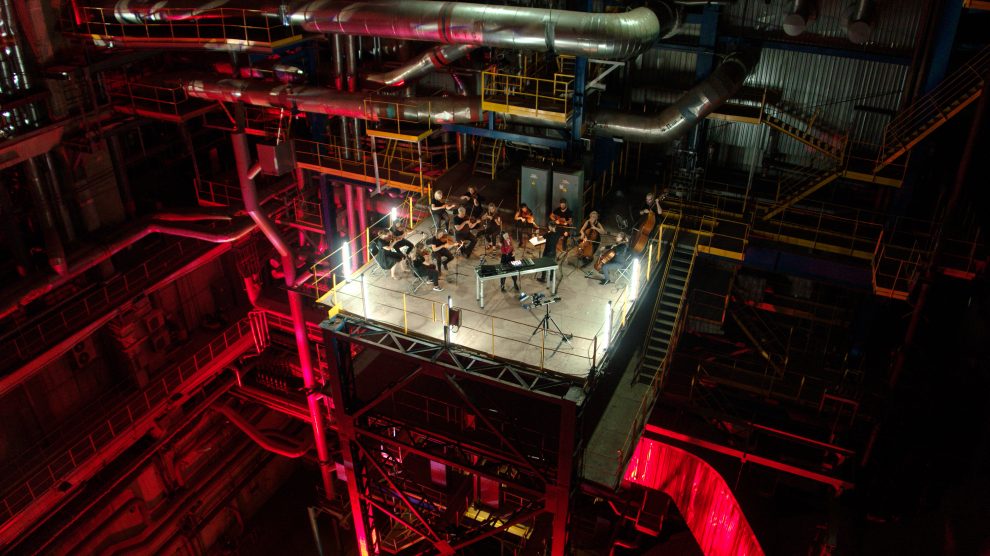 Recorded at a decommissioned Vilnius power plant during the summer, Laws of Distraction is a combination of electronic layers and live-processed string orchestra textures.

A former power plant in Vilnius served as the backdrop for an electro-acoustic concert called Laws of Distraction, which premiered this week.

Built in 1983 on the outskirts of the Lithuanian capital and decommissioned in 2015, Vilnius Power Plant-3 hosted a concert by electronic music composer Monikaze, which featured the St Christopher Chamber Orchestra of Vilnius.

According to the creative team behind the project, the setting helped highlight the message conveyed through the piece: the human struggle in a noisy modern world. Surrounded by a maze of industrial pipes, lights and ladders, Monikaze and the chamber orchestra, directed by conductor Modestas Barkauskas, told a story through eight different compositions.

“In an era defined by social media, the world has become a battleground for attention, to the extent where we can lose grip on reality and control of our minds. Click here and there, and before we know it ­– we’re gone,” says Monikaze, a Vilnius-based composer, songwriter and producer, whose real name is Monika Zenkeviciute.

“Simply put, we are constantly distracted, and getting anything done on time or at all has become much more challenging.”

The composer employs her quirky vocal style to tell her Laws of Distraction story through its main character, while an intertwining combination of electronic layers and live-processed string orchestra textures narrate that character’s inner and outer world.

The orchestra serves as an illustrator, reflecting the scenery with extended string melodies and different harmonic and rhythmic elements, which are often incorporated as musical allusions. These are used to mimic various sounds, like keyboard typing in the song www, the clinking of glasses in Opinions and ringing telephones in Time Robbers.

“The orchestra was excited to take part in the project. This collaboration is a great example of how seemingly distant musical styles can coexist and create intertwined artistic and unexpected pieces of music,” says Modestas Barkauskas.

“Also, since the piece was fully filmed to be streamed online, hopefully audiences will appreciate the artistry of the musicians behind the creation and use this story to consider the futuristic dualism between human and machine-generated sounds in a wholesome way.”

“In collaboration with Antidote Community, a project that sees independent Lithuanian artists organise open-air audio-visual performances, we were able to dream a little bigger,” she says.

“We wanted a performance space with overwhelming visual distractions and after searching around Lithuania, we stumbled upon Vilnius Power Plant-3, which we all immediately knew was perfect. It’s visually noisy, exciting and brings many conceptual layers complementing the core idea.”

The performance was recorded in the summer 2021.

Monika Zenkeviciute’s career took off after her piece Pocket made the top 10 Best International Composer Tribute List of 2019.

Since then, Monikaze has released a debut electronic music album, Chicken Wings, shared the stage with artists like Dopplereffekt, Algiers and First Hate, and recently released her second album Waste of Space on Moshi Moshi Records.

End of an era as Bucharest says goodbye to InterContinental, and Budapest’s Gellért closes its doors
Travel the Balkans even if Mother tells you not to
Comment