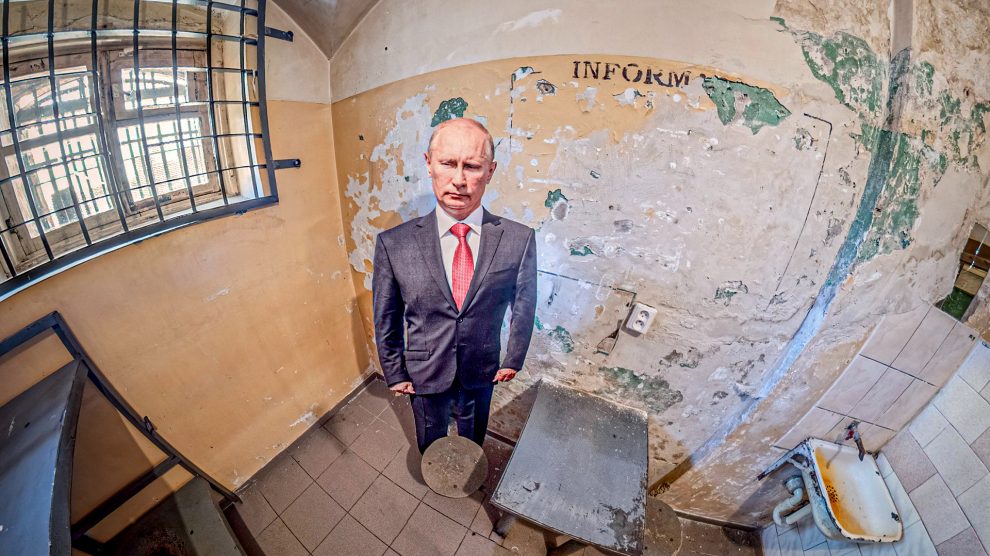 Built in 1905, Lukiškės Prison held convicts and political prisoners who were opposed to various political authorities, including Tsarist Russia, Nazi Germany, and the Soviet Union. Its latest inmate is Vladimir Putin, if only in virtual form.

The International Criminal Court’s (ICC) chief prosecutor last week called for an “overarching strategy” to bring perpetrators of war crimes in Ukraine to justice, with representatives from dozens of countries pledging to cooperate in their investigations.

Since Russian President Vladimir Putin ordered the invasion of Ukraine on February 24, his military forces have been accused of abuses ranging from killings in the Kyiv suburb of Bucha to deadly attacks on civilian facilities, including the bombing of a theatre in Mariupol.

“The simple truth is that, as we speak, children, women and men, the young and the old, are living in terror,” ICC Prosecutor Karim Khan said as he opened the Ukraine Accountability Conference in The Hague.

That Putin himself will ever end up behind bars is doubtful. But in the Lithuanian capital Vilnius, he already is.

The city, which like Lithuania itself has been a fervent supporter of Ukraine’s resistance to the Russian invasion since it began, has taken another a political stance against Russia by placing a “virtual” Vladimir Putin behind bars in one of the cells of Vilnius’ historic Lukiškės Prison.

The installation can be spotted on a virtual tour of the prison now made available through Google Street View technology.

The idea to place Putin behind bars came when designing the virtual tour on Google Street View. It was further bolstered when the prison’s guides said that many visitors expressed their desire to see Russia’s dictator behind bars.

“Vilnius has been an active protester against Russia’s aggression since February, helping refugees and supporting humanitarian, financial, and other war relief missions,” says Inga Romanovskienė, director at Go Vilnius.

“Lukiškės Prison 2.0 was chosen as a platform for the installation because, despite its difficult past, it is creating a new vision for its future. The symbolic imprisonment of Putin allows Vilnius to express its firm stance against aggression, captivity, and autocracy, while its virtual form invites people with the same values to join in.”

Besides taking a look at Putin in a cell, virtual visitors can explore other nooks and corners of the prison: the yards used for daily walks, and St. Nicholas Orthodox Church, which used to have a luxurious interior furnished with paintings, icons, and plush carpets.

Built in 1905, Lukiškės Prison held convicts and political prisoners who were opposed to various political authorities, including Tsarist Russia, Nazi Germany, and the Soviet Union. The prison survived both world wars and the Nazi and Soviet occupations and held many political prisoners from Lithuanian, Belarussian, Polish, Jewish, and other backgrounds.

After a century of operation, Lukiškės Prison ceased to function as an imprisonment facility in 2019 and opened its doors to the public and artists as a cultural hub. The facility has since become an open space for culture, artistic expression, and community.

The digital “imprisonment” of Russia’s dictator joins a list of other initiatives by Vilnius which condemn the unlawful invasion of Ukraine and the war on innocent citizens.

The name of the street where the Embassy of Russia is based was changed to Ukrainian Heroes Street,  a pond near the embassy was dyed red to symbolise spilled Ukrainian blood, while Remigijus Šimašius, mayor of Vilnius, painted “Putin, the Hague is waiting for you” on the street outside the embassy.