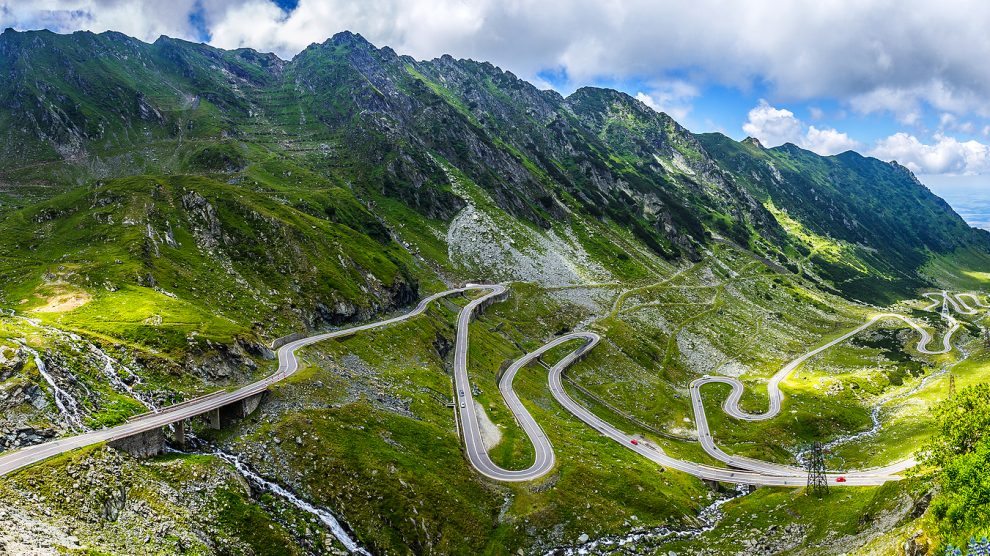 Romania’s Transfăgărășan Highway is one of the most celebrated roads in Europe. Open for just a few months each year, it attracts tens of thousands of visitors from across the continent. Is it now time for the country to cash in on its fame?

Though the Transalpina a little further to the west is, at 2,145 metres, higher (and, some purists claim, more spectacular), the northern ascent of the Transfăgărășan Highway to Lake Bâlea (at 2,042 metres) is one of Romania’s defining images.

Since being featured on the BBC’s Top Gear programme in 2009 it has also been one of the country’s most popular tourist attractions.

Indeed, its popularity – during weekends in July and August traffic barely crawls along its many hairpins, often coming to a complete halt while drivers and passengers stop to take photos or feed bears – just goes to prove that Ion Jinga, at the time the Romanian ambassador in London, was wrong to be outraged when he wrote to the BBC demanding that they re-edit the programme, which he thought caused great offence to his country.

While former Top Gear presenter Jeremy Clarkson – who has of course long departed the BBC – is unquestionably a provocative and divisive human being (I for one don’t care for him much), that particular episode of Top Gear (for all its tongue-in-cheek ribbing of Romania and Romanians) was just about the best advert for the country seen on UK television at any time over the past 30 years.

Clarkson was moved to describe the highway as “the most amazing road I have ever seen. From above, it looks as though every great corner from every great race track in the world has been knitted together to create one unbroken grey ribbon of automotive perfection”, before adding, “thank you Romania. Can we stay? Forever.”

That such sentiment caused Ambassador Jinga offence says more about him than anything else.

The Transfăgărășan, open its full distance from June until the end of September – was built from 1970-74, allegedly (as with everything else in Romania at the time, it would seem) on the personal orders of then dictator Nicolae Ceaușescu.

Legend has it that Ceaușescu wanted to create a strategic route across the Făgărăș Mountains to ferry troops north should Romania be invaded by the Soviet Union (as Czechoslovakia had been in 1968).

This legend of course ignores the fact that a perfectly good and far quicker route around the mountains (the Valea Oltului) already existed, and that any strategic impact of a road fully accessible for only a few months each year would have been minimal.

Still, who am I to question a good urban myth?

A far more likely explanation for the construction of the road was the simple fact that the mountains were there, and that a road across the very top would serve as a proud example of just what socialist Romania – with Ceaușescu as its leader – could achieve.

Much like the Danube-Black Sea Canal project of the 1980s the Transfăgărășan was therefore built as a status symbol with little regard for cost or usefulness.

Indeed – whisper it – but the Transfăgărășan is fundamentally useless. Nevertheless, it has never been more popular.

Always a favoured weekend trip for Romanian drivers, its international fame now means that motoring enthusiasts from all over Europe (particularly Poland, in my experience) beat a path here each summer.

As such, I have a very simple question: why is there no charge for driving over this amazing road?

It is purely a tourist attraction which – beyond Arefu on the southern side and Bâlea Cascadă on the northern approach – serves no villages.

Anyone who drives the road is doing so purely for leisure purposes, emitting noxious substances into a spectacular natural environment, and can do so for free (albeit with the proviso that they have a valid Romanian rovinieta, needed for all national roads).

Would it be too much to ask every car going over the top to pay a fee of 25 lei (just over five euros) and use the money to protect the surrounding environment, as well as contribute to the upkeep of the road (which is generally in good shape but always has some portions in need of repairs)?

Visitors have to pay to ride the cable car up to Lake Bâlea, why not make them pay to use the Transfăgărășan too?

A fee might also reduce numbers, if only slightly. I’d also like to see at least a couple of weekends each year when the road is reserved for cyclists (and yes, I’d charge them, too).