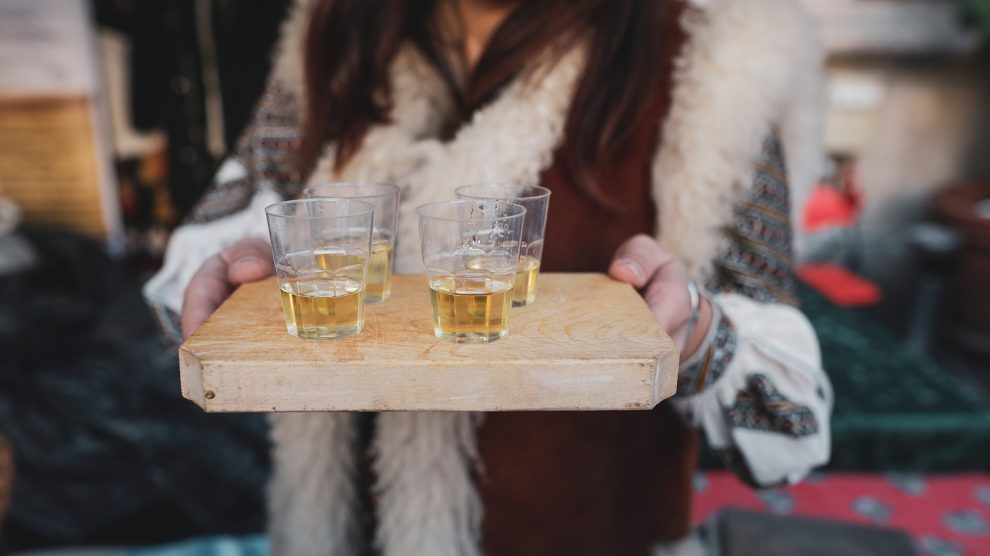 Țuică – a strong spirit hugely popular in Romania, essentially the national tipple – is a taste I have in more than two decades failed to acquire.

More than 20 years after marrying his daughter, I remain well aware of the fact that I am a huge disappointment for my Romanian father-in-law.

Not a total disappointment, I hasten to add. He’s done well out of me: trips to far-flung destinations (well, Bulgaria and Greece), tickets for big football matches, round-the-clock IT support and – of course – two wonderful grandchildren.

And yet these things count almost for nothing when he’s confronted with my complete and utter failure to fully embrace țuică: the prune-based, potent, pungent spirit of choice for just about every Romanian male on the planet.

Like most Romanians of his generation (and, indeed, many who are far younger), he makes his own țuică, as well as the even stronger drink pălincă, and what he will insist is cognac, but isn’t (not that it matters, I care little for cognac either).

Each time he visits, he will invariably bring a large bottle of his latest vintage with him, in case you’ve drunk all of the last batch I brought, he says.

There’s little chance of that: I never touch the stuff, and my larder is rammed with bottles of țuică, pălincă, and cognac (sic) that are unlikely to ever see the light of day again.

Occasionally, I might be able get rid of the odd bottle by offering it as a small gift to a workman or such like, but there always seem to be more bottles of țuică at home than ever.

While țuică is not the only Romanian taste I have yet to acquire in my many years living in the country – piftie (aspic) probably tops the list of foods I neither understand nor like, although ciorba de burta (tripe soup) would be a close second, such opinions are broadly uncontroversial. I know plenty of natives who will not go anywhere near piftie or ciorba de burta (although ironically I know at least one foreigner who loves both and trawls the restaurants of Bucharest looking for the best).

Țuică is a different matter. Not liking it – especially one made by a father-in-law or host – is taken very personally.

Politically a man of the right (and unafraid to share the fact with anyone who does – or doesn’t – ask), my father-in-law is nevertheless what I have learnt to call a classic țuică communist.

Talk to a communist and ask them to explain themselves in light of the many failed experiments of the past century, from the first workers’ state that was Soviet Russia to the current people’s paradise that is Venezuela and you’ll get much the same response:

Ah, but that wasn’t real communism.

For the committed commie, one-party states, the gulag, queues for basic foodstuffs, persecution of ethnic minorities and an utter lack of respect for the freedom of the individual are merely proof that a particular type of communism – and not communism itself – didn’t work.

Once their kind of communism is implemented, it’s only a matter of time before world peace and full equality prevail.

It’s much the same with Romanians and țuică.

No matter how many times I tell my father-in-law (or any other well-meaning host) that I really, really do not like țuică I get the same response:

Ah! But you haven’t tried this țuică.

Out of sheer politeness I have tried hundreds of home-brewed țuicăs over the years, all of which were claimed by their distillers to be the last word in țuică taste.

I can honestly say that I have liked none of them, probably because I simply don’t like the stuff, no matter how much care and attention went into its preparation.

I hate to be rude, but I now always have to refuse any offers of țuică. Even the smell of it is revolting.

And before I get accused of anti-Romanian sentiment, most strong spirits have a similar effect: whisky, rum, gin, grappa, calvados, pastis. I can’t stand any of them. At a push, if I must have a glass of something, I’d much rather it were a vișinată (a sweeter spirit made with cherries).

Alas, in the eyes of the average Romanian male refusing glass after glass of țuică and asking for a vișinată marks you down as being severely suspect, if not an outright wrong ‘un.

Fortunately, good man that he is, my father-in-law now makes vișinată.

My larder is full of that too.