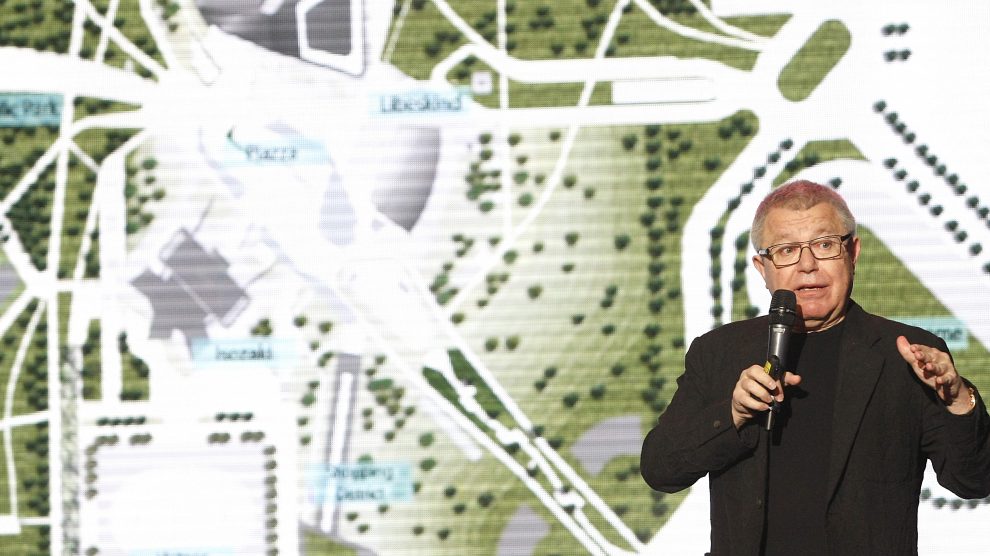 The US architect Daniel Libeskind is bringing his unique version of urban regeneration to his hometown of Łódź in central Poland with a large-scale architectural project called Nexus21. But not everyone appreciates the gesture.

Architect Daniel Libeskind is famous for his unconventional and angular structures, not the least of which is the Frederic C. Hamilton Building at the Denver Art Museum, opened in 2006.

Previously, in 2003, he won the competition to design the World Trade Centre site after the September 11 attacks.

Libeskind is best known in Poland meanwhile for his design of the Żagiel skyscraper on Warsaw’s Złota 44 street. His global designs include the Jewish Museum in Berlin and San Francisco and the Imperial War Museum North in Manchester.

Libeskind says the approach to urban revitalisation in Łódź focuses on multiple neighbourhoods in the centre of the city.

The 21 sites, mostly empty blocks and derelict structures, will be revitalised to create what he calls “point investments” that “amplify the character and functionality of each site.”

He says the plan targets the spaces between buildings, aiming to create “a nexus between old and new while adding value to the historic neighbourhoods of Łódź. The aim is to create a chain reaction of development across the city that enriches the public realm.”

The Łódź Architecture Centre – the first part of the project – is to be erected at the corner of Włókiennicza and Kilińskiego streets.

in 2018, Libeskind, on a visit to Łódź at the invitation of Andrzej Walczak, president of the Atlas Capital Group, said that Kilińskiego was very important in his life.

“I think I was born on it. There was a shelter for the homeless. My mother lived in it for some time, after she came from Russia,” he said.

The centre will provide exhibition and educational spaces, and facilities for public events. The glass geometric design will include glazed skylights and a green roof as well as state of the art technology.

A Fashion Innovation Centre will be the next to follow and will celebrate the history and traditions of the Łódź textile and fashion industries.

Other sites will include a House of the Futures, a centre designed for the exploration of questions connected with the future of the city and how people want to live.

It is designed to highlight the city’s innovation and creativity in industries such as architecture, textiles, fashion and film, all of which are a key part of the city’s heritage.

“The Libeskind building is a massive block thrown into the city by a conceited ignorant architect who despises the city for which he designs and its inhabitants,” wrote architect Jakub Krzysztofik in a commentary for the Łódź section of newspaper Gazeta Wyborcza.

“While Złota 44 finds itself well in the rich and skyscraper-saturated centre of Warsaw, in the centre in Łódź it resembles a tourist from the West, lost among the poverty of tenement houses. Libeskind did not take into account the fact that Łódź is struggling with basic problems,” Krzysztofik says, adding that there is a problem of heating in many homes in the city centre.

The millions of zlotys it will cost, Krzysztofik told Newsweek, could be spent on improving the standard of living of the inhabitants.

“The construction of the Architecture Center is in a reverse order. What should symbolically close the long-term process of revitalising the city is to be built when Łódź is just beginning to revitalise,” he said.

“Perhaps the most serious mistake of the future building is its arrogance towards the place on which it is to stand. The building does not interact with the space in any way, it is closed to what is happening around it. Neither a green zone has been planned around it, nor has it been designed in such a way that, for example, a terrace open to the street, it would encourage passers-by to visit it,” Krzysztofik says.

Four great films from Azerbaijan you really ought to watch
Are there ancient pyramids in Bosnia? Probably not
Comment