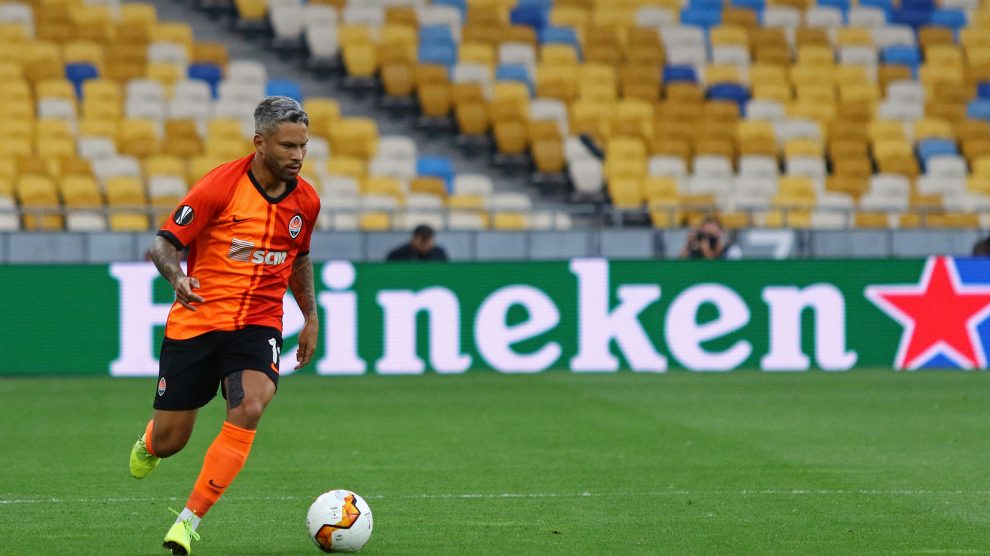 Just over a decade ago, Ukrainian football looked set to take a major step forwards towards establishing itself as a leading European power.

Attendances at Ukrainian Premier League matches were at record levels, and rising. The country was ready to host Euro 2012, investing major sums in modern football infrastructure. And Ukraine’s two biggest clubs – Dynamo Kyiv and Shakhtar Donetsk – were familiar names on the European stage: Shakhtar won both the UEFA Cup and UEFA Super Cup in 2009.

In 2014, this optimism was dashed by the outbreak of war in the east of the country. One of the first – and biggest casualties – was Shakhtar Donetsk.

Last year, Shakhtar announced that it would be playing home games at Kyiv’s NSC Olimpiyskiy Stadium. It was the side’s third relocation since war broke out in the Donbas region.

“It’s brought me closer to the club,” laughs Dmitry Aleshenko, a Shakhtar fan from the town of Yasynuvata, just north of Donetsk. “We are both refugees, both living in Kyiv.”

While Shakhtar is not the only European club to hail from an unrecognised territory – Moldova’s Sheriff Tiraspol, competing in the Champions League this year, is based in the breakaway region of Transnistria – Shakhtar is currently the only one in exile.

For decades an unremarkable mid-table side in the Soviet and then Ukrainian football leagues, Shakhtar, known as “the miners”, exploded to prominence in the mid-1990s when it was taken over by local up and coming businessman Rinat Akhmetov, currently the richest man in Ukraine.

It took until 2002 for Shakhtar to break Dynamo Kyiv’s stranglehold over Ukrainian football, winning the league for the first time. Two years later, the miners hired Romanian Mircea Lucescu as head coach, paving the way for its golden era.

Shakhtar utterly dominated Ukrainian football for much of the 21st century, winning nine league titles between 2002 and 2014. By 2011, Akhmetov had invested an estimated 900 million euros into the club, including a state of the art stadium, the Donbas Arena.

When Shakhtar completed its European double in 2009, it was widely expected that the team would go on to establish itself as a continental powerhouse – something that could only have knock-on benefits for the rest of the Ukrainian league.

But this progress was derailed by the war in Donbas. Shakhtar were displaced as soon as their home city was taken over by Russia-backed separatists. The players, coaches, and administrative staff relocated to Kyiv – but the club initially had to play its home games in Lviv, about 1,200 kilometres away at the opposite end of the country.

“This for me was a nonsensical decision,” says Dmitry Aleshenko. “Not only are there almost no Shakhtar fans there, but at the time, there was a lot of hostility in the country. And Lviv is the centre of Ukrainian patriotism and nationalism. Those were emotional times and many people from there viewed us [people from Donbas] as traitors, as a Russian fifth column.”

Halfway through the 2016-17 season, Shakhtar relocated again, choosing to play their home games in Kharkiv, while continuing to live and train in Kyiv. This was at least significantly closer to Donetsk, and put the club within driving distance of government-controlled parts of the Donetsk region.

Living with the enemy

In 2020, the club relocated again. This time, controversially, Shakhtar decided to play its home games in NSC Olimpiyskiy stadium in Kyiv, Ukraine’s national stadium which has been used by Dynamo Kyiv for well over a decade.

Unsurprisingly, Dynamo ultras, who share a passionate and sometimes violent rivalry with Shakhtar which often goes beyond football, were incensed. “Once again, we can see our club is run by ‘professionals’ who first invite the enemy, then get surprised when they lose everything,” read a statement by an official Dynamo Kyiv ultras group. “The situation itself proves once again that the words and actions of the Surkis brothers [co-owners of Dynamo] are not worth a single cent.”

Oleksandr Mamalyga, marketing director of Shakhtar, argued in response that the Olimpiyskiy stadium is a state-owned facility and the state has a right to lease the ground to any team.

Earlier this month, the issue flared up again when Shakhtar opened an official fan store at the stadium – a stone’s throw from Dynamo’s own store. Dynamo ultras raised a banner over the store reading “Get out of Kyiv, rusty bastards”.

Building up a support base in the Ukrainian capital has been difficult. Most football fans in Kyiv support one of the local teams – this only leaves internally displaced people (IDPs) from Donetsk to support the team. There are an estimated 1.5 million internally displaced persons from Donbas region in Ukraine – of these, roughly 250,000 live in Kyiv and the surrounding areas.

However, this counts people from both Donetsk and Luhansk oblasts, with those from the latter significantly less likely to support Shakhtar. Furthermore, even among IDPs from Donetsk, the majority don’t follow football to the extent of regularly attending matches.

On top of all of this, many IDPs found themselves financially struggling after being displaced and had no time or disposable income for matches. Dmitriy for example owned a moving company in his now separatist-controlled hometown of Yasynuvata; now, he drives a taxi for Uklon.

As such, Shakhtar’s league games are sparsely-attended. Playing in a 70,000 seat stadium drives home the team’s plight. Even for European games against top-level continental opposition, which draw big crowds – such as Shaktar’s game against Real Madrid this week (the Ukrainians lost, 5-0) – it appears that less than half of attendees are actual Shakhtar fans.

That Shakhtar has managed to survive is itself a miracle, but prospects of returning home remain dim, with no end in sight to the frozen conflict in Ukraine’s east.

“We won’t truly be the same Shakhtar as long as we play here,” Dmitry says. “But we have to learn to live with these circumstances. Of course, this is probably the most minor effect of the war on our lives. I want to be able to go back not just to watch my team in its home ground – this is unimportant really – but to see peace in my country and my city.”