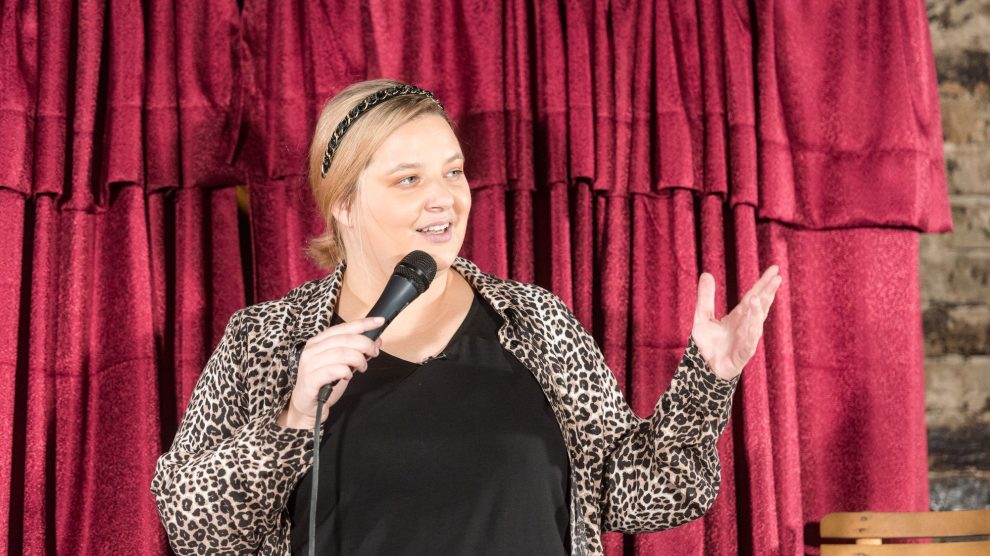 A group of comedians have spent the last decade creating a small but vibrant standup scene in the Serbian capital Belgrade.

It’s 8:30 pm on a Wednesday and the Ben Akiba comedy club in downtown Belgrade is full to the brim. In fact, it’s impossible to get a table unless you reserve in advance. Those who decided to come last minute are crowded together at the bar.

What is about to begin is a Ladies’ Night comedy special. Four comedians, some seasoned some not, tell jokes that range from the observational to the risqué — all are met with riotous laughter and applause.

Just like elsewhere, in Serbia, comedy is not exactly thought of as a female profession. In fact, the late philosopher and contrarian provocateur Christopher Hitchens opined in a 2007 Vanity Fair essay that women simply aren’t funny.

The audience on Wednesday night did not get the memo. Neither did Jelena Radanović, a comedienne and self-described “eternal sociology student” who has been doing stand up for ten years. Her mix of observational humour, sarcasm, and self-depreciation clearly resonates with the crowd.

She tells Emerging Europe that she takes inspiration from a lot of things — herself, her environment and of course the daily goings-on in Serbia and Belgrade.

While Radanović is a seasoned pro, that’s not true of all the women who performed. For Marija Žagar, a 21-year-old comedian, it was only her third time in front of an audience. Yet she exudes a confidence beyond her years and stature.

At Ladies’ Night, it’s easy to forget that comedy is often an uphill battle for women who want to participate in something that has for so long been implicitly, and at times explicitly, coded as male.

“Being funny is a guy thing, and it was always like that and it will be,” Radanović says.

Yet very clearly things are changing.

“What I like, the things that this girl is saying at only 21, I wouldn’t dare say when I was 21. I’m glad there are new generations of young women that are fighting much earlier. So, something will happen — when I’m dead — but it will happen.”

But the reality might be less bleak than that. Radanović explains that in Serbia, women received the same hate as their male counterparts when standup was first becoming a thing. She says that put them in a “phenomenal position”.

Standup, as a genre, is not exactly a traditional art form in Serbia. Most people still think of it as a western thing — the only standup comedians they know are those who are globally popular. Jerry Seinfeld, Dave Chapelle.

“People have prejudices but what I like best is when they come and those prejudices are broken down. I don’t think that more than two or three per cent of people that didn’t like standup leave still thinking that,” Radanović says.

Over the last ten years, standup has gone from being a marginal pursuit in Belgrade to a phenomenon that is spreading to other cities. Standup.rs now organises festivals, and its events fill some of the biggest venues in Belgrade. And a crop of very successful comedians such as Srđan Dinić has emerged.

“People have gotten used to our quality. Being ‘powered by Standup.rs’ helps because we have excellent professionals in our team, people who have already proven themselves. So when the rest of us team up with them, people trust us more,” Radanović explains.

With such a vibrant scene and such increasing public interest, it’s hard to imagine that a just a decade or so ago, standup wasn’t really big – or even a thing – in Serbia at all.

That changed, thanks to Milica Mihailović and open mic night held at KC Grad. One after another would-be comedians assumed the position in front of a brick wall. And proceeded to completely bomb.

No school for standup

“There’s no school for standup,” Radanović says. “Not in America, not in the UK, where the tradition is much older.”

And, really, open mic nights are always like that. What’s important, according to Radanović, is that the scene has developed and more and more people actually come to open mic nights.

“It’s a dangerous rollercoaster of emotions to get applause at the end,” adds Mihailović.

While standup in English has been popular among urbanites in Serbia for a long time, Radanović points out that there are upsides to local humour that international comedy simply can’t match.

“You can’t like Serbian standup but we understand each other. When we say ‘I got stabbed at Karaburma’ or ‘a maniac in a Belgrade bus’ you have a strong identification,” she says.

“A large number of people who dislike Serbian standup just can’t admit to themselves they’re Serbs and don’t live in New York because that’s the fantasy in their heads.”

What isn’t a fantasy is that Serbian standup and the women who are brave enough to step in front of a club audience are blazing a new trail in entertainment. For those who still don’t believe, Radanović has a simple message.

“If you want to spit on us, you have our YouTube channel.”