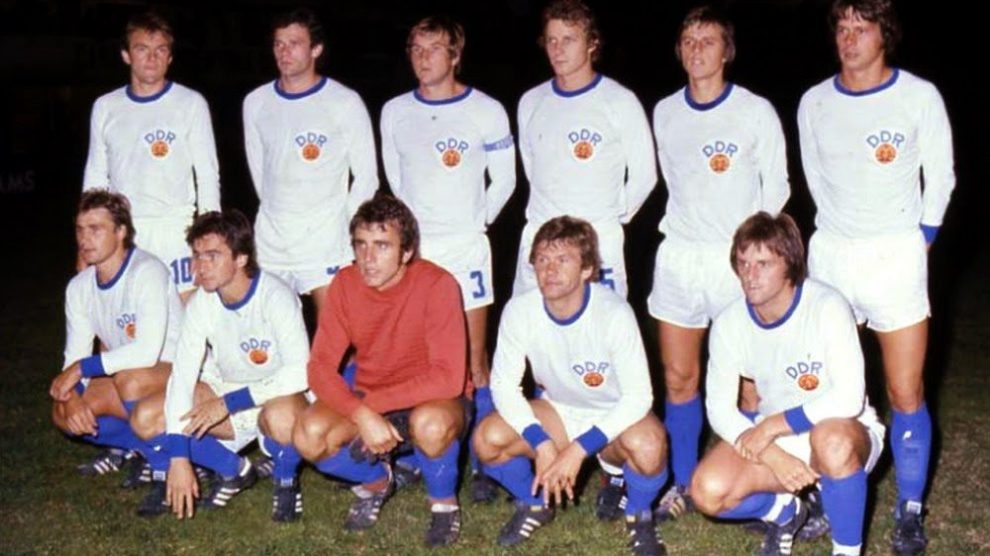 Football in parts of Eastern Europe during the communist period was a hotbed of intrigue and outright corruption. It was also the home of technological innovation decades ahead of its time. There are, alas, few decent books available in English that tell the many stories to have come out of the region. We will point you towards the best, however.

In Fatherland, a 1992 alternative history detective novel set in a world in which Nazi Germany won World War II, author Robert Harris tells us that the only section of Germany’s newspapers ordinary people actually read were the sports pages:

If the results column says that Hamburg defeated Cologne 4-0 at football, then it is probably true. Nothing else in the paper is.

In the real post-World War II world, in Eastern Europe, many would have been forgiven for having doubts even about the football results, not least in East Germany, where Dynamo Berlin, the country’s best team, won 10 Oberliga titles in a row during the 1970s and 1980s.

The team was the personal plaything of Stasi boss Erich Mielke, who is often said to have used his considerable influence to pressurise referees into ensuring that the outcome of matches went in Dynamo’s favour.

The German Football Association has itself concluded that “Dynamo, as the favorite club of [Mielke], received many benefits and in case of doubt, mild pressure was applied in its favour”.

Instead, it channeled funding into individual sports, athletics and swimming especially, conducting a decades-long programme of coercive administration and distribution of performance-enhancing drugs, initially testosterone, later anabolic steroids, to its elite athletes. Some were caught, but many – in those days, out-of-competition testing was rare – were not.

Even so, the stellar performances of many East German athletes – particularly female – have long been under suspicion that they were achieved with the aid of performance-enhancing drugs.

Marita Koch’s 400 metres world record of 47.6 seconds, set in October 1985, still stands. Since then, no woman has come within half a second.

Footballers of course have for decades been banned or suspended from the game for taking illegal substances, but these have almost always been recreational drugs. Football does not readily lend itself to manipulation by doping.

In the Soviet Union – itself not averse to doping athletes – it was technology that football turned to in order to try and dominate the game. In Ukraine, Anatoly Zelentsov, a professor at Kyiv’s Institute of Physical Culture, came up with computer games to test the mental agility of Dynamo Kyiv’s players.

Working together with the team’s coach, Valery Lobanovsky, he devised exercises that would enable players to remember set plays, to know where each individual player would be on the pitch at any given moment, in any situation. They poured over statistics, analysing every aspect of an individual’s ability and performance decades before such practices would become an integral part of football at clubs across the world.

They invented, to all intents and purposes, modern sport science, in an effort to rationalise what had hitherto been viewed as a random and ad hoc sport. To an extent, they succeeded.

Dynamo Kyiv won the European Cup Winners’s Cup twice, in 1975 and 1986, as well as the European Super Cup in 1975 (against Bayern Munich) in a match that includes probably the best goal you’ve never seen, scored by Oleg Blokhin, who would later coach Dynamo, and the Ukrainian national team, himself.

Blokhin was also in 1975 voted the European Footballer of Year.

In 1988, the USSR – coached by Lobanovsky and made up almost entirely of Dynamo Kyiv players – reached the final of the European Championships. They were defeated 2-0 by The Netherlands (in a match that includes probably the best goal you have seen).

Often forgotten is that the usually reliable Igor Belanov missed a penalty in that final. No computer programme can account for that.

In Romania, football during the Nicolae Ceaușescu regime was beset with scandal and corruption. Ceaușescu actually had little interest in football, but nevertheless an enormous stadium was built in his home village of Scornicești, and the local team, FC Olt, were in the late 1970s quickly promoted through the divisions to the top tier.

In 1979, the team won the last match of the season 18-0 to ensure promotion to the first division on goal difference.

There was also controversy over Dinamo Bucharest forward Rodion Camataru’s Golden Boot victory in 1987 (the Golden Boot – now Golden Shoe – is an award given to the leading scorer across all of Europe’s football leagues). Camataru scored 18 goals in the final six matches of the season to take the award from Rapid Vienna’s Toni Polster.

Camataru himself has since said that he knew nothing of a conspiracy to allow him to win the solid gold boot, which, after all, would have at that time probably more than doubled Romania’s precious metal reserves.

“All I know is I scored those goals, and that nobody stood by to let me put the ball in the net,” Camataru once said. He was nevertheless stripped of the title in 1990, which belatedly went to Polster. Camataru – undoubtedly an excellent player, it must be said – was however allowed to keep his golden boot.

Shenanigans aside, as with Ukraine (and unlike East Germany), Romania did produce at least one genuinely brilliant team during the communist era, Steaua Bucharest, who won the European Cup in 1986, defeating Barcelona on penalties.

They were also beaten finalists three years later, although even here there is suspicion: in Champions of Europe, A History of the European Cup (now sadly out of print), that most erudite of football writers Brian Glanville hints at “endless rumours” over what he calls the “passivity” of Steaua’s players that night.

It’s clear that what we today call emerging Europe was in its previous guise of Eastern Europe full of sporting intrigue, with football taking top billing (and I haven’t even mentioned the 1983 Polish Cup Final).

It is therefore a deep shame that there is so little literature available (at least in English) about football in the region during that period.

But there is some.

The first point of reference remains Simon Kuper’s superb 1994 book Football Against the Enemy, which amongst much else includes a fabulous chapter on the Zelentsov experiment at Dynamo Kyiv.

Jonathon Wilson’s Behind the Curtain: Travels in Eastern European Football (2006) is another decent effort, but its readability is let down somewhat by the author’s love of tactical minutiae. Nevertheless, it should be part of the library of anyone with even a vague interest in football in communist-era Eastern Europe. Its telling of how war and the break up of Yugoslavia led to the disintegration of a team that was on the verge of becoming a footballing superpower is excellent.

Wilson is also the author of equally scholarly The Names Heard Long Ago: How the Golden Age of Hungarian Soccer Shaped the Modern Game.

For East Germany, I would point you in the direction of Alan MacDougall’s The Peoples’ Game, Football, State and Society in East Germany. It devotes an entire chapter to Dynamo Berlin, who MacDougall calls “the crooked champions”. It also includes a fascinating look at fan culture in the GDR, including hooliganism, which the regime claimed did not exist. MacDougall demonstrates that it most certainly did.

By some distance, however, the most remarkable book about football in Eastern Europe is Andy Dougan’s Dynamo: Defending the Honour of Kiev (sic). It is not a history of Dynamo, but instead an in depth look at a series of matches played by a Kyiv-based club then known as Start during World War II, against teams representing the army and air force of Nazi Germany.

The less-than-memorable 1981 film Escape to Victory starring Pele and Michael Caine is (very) loosely based on the story of Start. Escape to Victory of course has a happy ending. For Start’s players there was no such thing, although Dougan sorts fact from fiction to reveal that the oft-cited legend that the entire Start team was shot for not agreeing to lose their final match, against the Luftwaffe, is false.

Photo: The East German national team line up before a match against Argentina in 1977. Wikimedia Commons/Unknown Author/Public Domain.