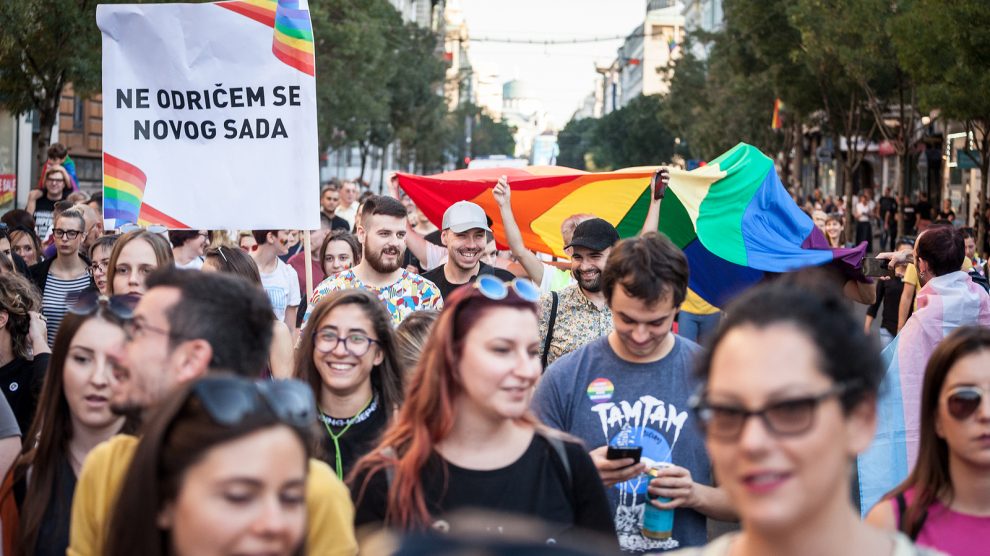 A new book is challenging the idea that queerness in Serbia is a foreign concept, imposed on a traditional society by outsiders. Emerging Europe speaks to its author, Igor Perišić.

For many people, queer culture and the national literature canon of the Western Balkans don’t quite go hand in hand. But a new book published in Serbia calls this idea into question. Has there always been a queer presence in Serbian culture? Igor Perišić, associate at the Institute for Literature and Arts, and the author of Serbian Queer thinks so.

A treatment of classic Serbian literature from the end of the 19th to the begging of the 21st century utilising queer theory, Serbian Queer finds that there’s more queerness in it than one might think initially.

“I tried to give a framework [the Serbian title Srpski (O)kvir is fittingly a play on words as ‘okvir’ means framework] that can serve future authors for their own works, and maybe for a holistic history of Serbian queer literature,” Mr Perišić tells Emerging Europe.

The first chapter of the book deals with Jakov Ignjatović’s Eternal Bachelor (Večiti Mladoženja, first published in 1878) in which the titular character, Šamika Kirić, finds it a bit too hard to get married. Was Šamika meant to be read as gay then? That might be going too far, but Mr Perišić makes a convincing argument that Ignjatović was dealing with the subject of queerness, even though that framing and understanding didn’t exist at the time.

Moving forward in time, to Stevan Sremac’s Zona Zamfirova (whose 2002 film adaptation remains one of the most popular Serbian movies of all time), readers can find the character of Aunt Doka, a woman clearly coded as masculine and not following the patriarchal ideal of how women should behave.

What all the examples through the history of Serbian literature show is that queer characters were in some shape or form always present, even if their exact way of sticking out from regular society was almost never addressed head on.

“In the period that I deal with, which is a bit more than a century, there is a certain tolerance toward homosexuality in culture and artistic circles,” Mr Perišić says. “A budding of all sorts of avant-garde energies was prominent in the period between the two world wars, so therefore non-heteronormative figures such as Rastko Petrović or Slobodan Jovanović were tacitly acknowledged.”

Queer theory as we know it today, a study of gender and sexual practices out of the “heteronormative” sphere, is a relatively new way of examining society, history, and literature that emerged in the 1990s as an outcrop of critical theory influenced by the French sociologist Michel Foucault.

That’s one reason why such treatments of Serbian literature are rare. “Sporadic”, as Mr Perisić puts it.

The other reason of course, is prejudice and a lack of desire to talk about such subjects. As Serbian Queer puts forth in the analysis, many literary critics, going back all the way to the late 19th century, preferred not to engage with the parts of the texts that may have suggested something outside of the prevailing gender and sexual mores of the time.

After the interwar tacit tolerance, the atmosphere shifted with the coming of the socialist Yugoslav state.

“After World War II, the communist political commissars want to make a ‘proper’ socialist man and for about twenty years would not let anything ‘odd’ come into the public sphere,” Mr Perišić says. “From the 1970s onwards that pressure let up, and with Serbian society once again opting for liberal democracy in the 21st century, there is progress, slow but noticeable.”

Today, of course, there are regular pride parades in Belgrade and the country’s prime minister, Ana Brnabić, is a lesbian cohabitating (there is still no same-sex marriage or civil union in Serbia) with another woman.

Yet there are those for whom any identity outside of the heterosexual and cisgendered represents something foreign and “Western”.

It’s not uncommon to hear, in right-wing and religiously fundamentalist circles, to hear of the “gay lobby” engaged in nefarious plots against the Serbian people, church, and state.

“Even now, there is a bit of odium directed at my book,” says Mr Perišić.

But it does seem that such voices are becoming more and more outmoded.

“It’s more in the margins in the form of ‘hate’ comments on social networks and on the internet. The academic, cultural and media mainstream has so far welcomed the book,” explains Mr Perišić.

Perhaps this look into how Serbian writers and literature itself dealt with the subject of queerness, can help cast aside the idea that LGBT people are something new and imposed from outside Serbian culture.

Right now, LGBT issues are once again at the forefront of Serbian public discourse as the ministry of human and minority rights and social dialogue is preparing to submit a draft of the law that would allow registered same-sex unions to the National Assembly. Reactions were mixed along predictable lines with activists and left-leaning politicians supporting it, but the Serbian Orthodox Church firmly in opposition.

When it comes to art and literature, however, Serbian Queer decidedly shows queerness has always been a part of culture, whether acknowledged tacitly or explicitly.

For Mr Perišić, art is, in a way, always queer.

“The stable identities or happy families as Tolstoy would say, are not very interesting for literature. I’d go as far to say that few, in Serbian literature included, take on the work of an artist without having something intrinsically queer in themselves — something off kilter and eccentric compared to the majority.”