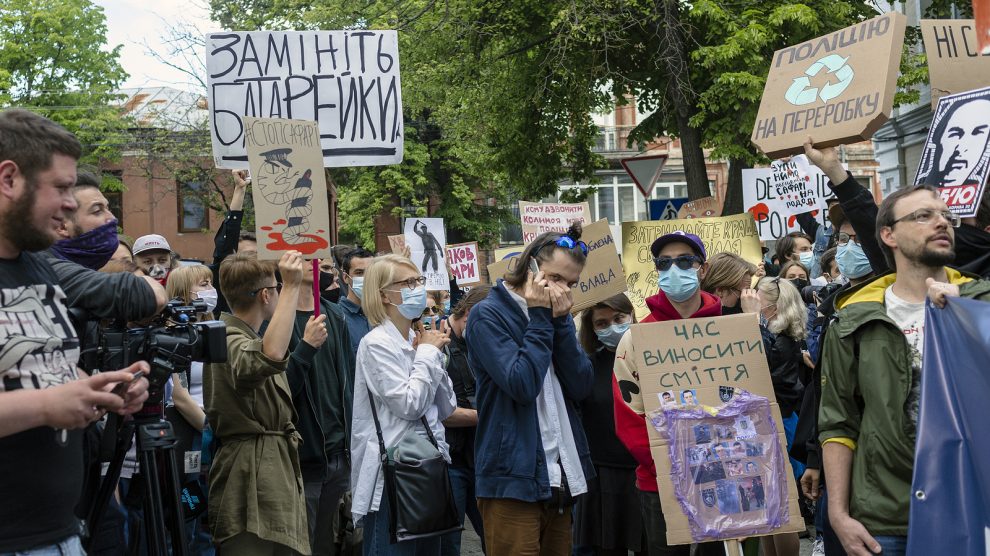 Artists in the Kyiv district of Podil are taking a stand against police brutality against their community.

In the Ukrainian capital Kyiv on May 15, what was meant to be a calm outdoor concert was shattered by dozens of masked police officers in riot gear, prematurely shutting down the event. Those present complained of excessive force being employed by the police. Several concert-goers were arrested.

Officially, the police action was a preventive measure against Covid-19 quarantine violations. However, the behaviour of the police has sparked a fierce backlash from Ukraine’s artistic community and has prompted a movement to form demanding more impartiality in law enforcement.

The complex where the concert took place, at 31 Nyzhnoiurkivska Street, is one of the most famous venues in Kyiv.

Built on the premises of a former ribbon factory, it houses four nightclubs (including the renowned Closer), a restaurant, a radio station and a tattoo parlour. Over the years, it has become a hub for Kyiv’s artistic community and a popular hangout for youths, ravers and electronic music lovers. Its events aren’t limited to parties: art exhibitions, book releases and academic talks are all regularly held here.

However, this has also given the venue something of an unwanted reputation. Ask any taxi driver in the city to take you to Closer, and their response will likely be: The drug addicts’ club?

This has made it a target for law enforcement. Over the past decade, there have been several police raids on the complex, often conducted by the anti-narcotics subdivision of the Kyiv police. These would normally find personal quantities of drugs such as cannabis and amphetamines on clubbers, leading a Kyiv court to rule in 2015 that the venue was enabling the use and sale of illegal drugs.

However, May 15’s raid wasn’t about drugs. Rather, it was about enforcement of lockdown measures. The concerts that were shut down were planned to start at 8PM and end by 10PM. Under current regulations, restaurants and bars in Kyiv have to close by midnight.

The organisers claim that they did everything within the regulations. That people were required to wear masks (when entering), temperature screenings were conducted and social distancing measures enforced. In fact, one of the concerts was already underway when the police burst in, turning off the music and turning on the lights.

For many, it is the hypocrisy and selective enforcement of the police that is the most anger-inducing. According to a promoter at the venue, that evening, “All of Kyiv sparkled with the lights of parties, events and festivals for every taste… in this situation one word comes to mind: racketeering.”

It is true, however, that despite lockdown regulations, it isn’t difficult to find institutions semi-openly violating them. Even when Kyiv was in the “red zone” – stipulating the strictest lockdown measures – non-essential businesses continued to operate. Now, with Kyiv in the “yellow zone”, many bars and nightclubs simply shut their doors at midnight and continue operating inside as normal. This is often “protected” though bribes to police officers – and most of these venues run into no legal problems.

This has prompted some people to express their belief that the raid on 31 Nyzhnoiurkivska, as well as being symptomatic of the rampant corruption still embedded within government institutions, is also part of a concerted effort by the police to target the artistic community.

Police harassment in the artsy neighbourhood of Podil, where the complex is located, is common. Some believe this is driven by the aversion of individual police officers to the perceived lifestyles of some of the revellers, who are stereotyped as being drug users, queer and non-traditional.

On May 18, just a few days after the raid, local musician Dmytro Buhaichuk was assaulted by police in Podil. The police later claimed to have discovered drugs on him and are currently investigating Buhaichuk for drug possession, which carries a penalty of up to five years in prison.

What happened to Buhaichuk proved to be the last straw. Kyiv’s artistic community was mobilised and 15 businesses and organisations based in Podil released a joint statement, calling for several actions to be taken by authorities. These include the dismissal of Pavlo Vasylenko, head of the Podil subdivision of the Kyiv police, the opening of criminal proceedings against police officers involved in the May 15 raid and in the assault on Dmytro Buhaichuk, and a total halt to illegal raids and searches on nightlife venues in Podil. These have been promoted by several prominent Ukrainian musicians, such as rapper Alyona Alyona.

However, with Covid-19 still a major problem in Ukraine, it will be difficult to get the public on side. Covid-19 also gives the authorities a ready-made excuse to crack down in Podil, even if venues elsewhere remain open.

While the Ukrainian public – like others in many other countries – is broadly disdainful of the police, the perception of 31 Nyzhnoiurkivska as being a hub for drug users will also hamper any kind of campaign trying to protect the businesses located within and the community that it attracts.

However, at the very least, these incidents could serve to expose the institutional corruption that hamstrings Ukraine’s efforts to modernise.