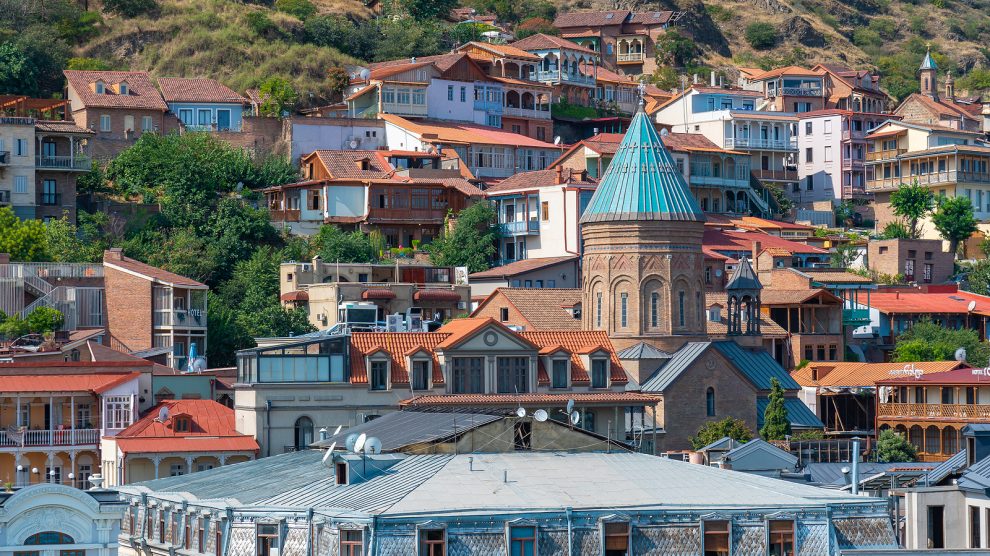 Tbilisi’s Armenian heritage is danger of being forgotten entirely, but there is some hope.

Armenian intellectuals, wealthy merchants and leading cultural figures have been an integral part of life in the Georgian capital Tbilisi for centuries.

Indeed, according to Finnish academic Serafim Seppälä, who has written extensively on Armenian culture and history, Tbilisi in the 19th century was “the most Armenian town in the world”, with Armenians accounting for more than two-thirds of the city’s population.

The decline has been steady, not precipitated by any one particular event, but the reduction in  size of the city’s Armenian population has meant that much of its Armenian heritage – residential buildings, schools, churches and other cultural monuments built by the Armenians of Tbilisi – has been neglected or simply forgotten entirely.

The Armenian Apostolic Church has borne the brunt. Where once there were 24 Armenian churches in Tbilisi, today just two remain.

Some of these were confiscated under Soviet rule, only to be handed in the 1990s to the Georgian Orthodox Church.

According to a report on international religious freedom published by the US Department of State, both the Roman Catholic and Armenian Apostolic Churches in Georgia “have been unable to secure the return of churches and other facilities closed during the Soviet period, many of which later were given to the Georgian Orthodox Church by the state”.

The same could be said for many other Armenian heritage sites in Tbilisi, such as the Armenian Drama Theatre, one of the most potent symbols of Armenian culture in the city.

Named after an outstanding Armenian actor and poet, Petros Adamian, the theatre was established in 1858 by the Armenian theatre figure George Chmshkian.

Rebuilt in 1936 and renamed the Stepan Shahumian Armenian Theatre after a leading Bolshevik, it is currently in poor condition, and has been closed for seven years.

Fortunately, there is hope.

The Kartu Group, a charity organisation founded by Georgia’s richest man and former prime minister of Georgia Bidzina Ivanishvili, has undertaken to restore the building. Armenia’s Ministry of Culture is also set to provide the theatre with funding.

However, while reconstruction was planned to be completed in 2020, Tbilisi City Hall recently announced that the date had been postponed until 2023.

The most beautiful city in Eastern Europe

Among the many Armenians who left their mark on Tbilisi few are greater than Mikael Aramyants, a man who in the latter part of the 19th century wanted to turn Tbilisi into the most beautiful city in Eastern Europe.

Originally from Karabakh, he made his home in Tbilisi in the 1860s and became a successful sugar and cotton trader, and later an oil magnate.

Part of his legacy is the magnificent renaissance and baroque Tbilisi Marriott Hotel, which he built at the beginning of the 20th century, calling it the Mazhestik, and the former Aramyants Hospital.

And yet his name is all but forgotten. Although some older Georgians still call the hospital after its founder, it is officially today simply known as Central Hospital.

According to Anna Sarkisyan, president of the Georgian Association of Cultural Relations, neglecting the Armenian legacy in Tbilisi is nothing new.

“The process of abandoning Armenian heritage in Georgia started during the repression of Tsarist-era Russia,” she tells Emerging Europe.

And since then, little has changed.

“Unfortunately, the Georgian government is not usually interested in the preservation of [Armenian] heritage, which is systematically demolished.”

Also at least partially forgotten is the name of the Tamamshevs, a wealthy Armenian family of merchants.

The Tamamshevs played a significant role in Tbilisi’s cultural and educational development: Gavril Tamamshev funded the construction of the first opera house in Tbilisi in 1847 when the Russian Tsar’s treasury refused to do so.

Gavril Tamamshev also donated his library, containing thousands of volumes, on the establishment of the Georgian National Library.

In the 1850s, the Tamamshevs constructed a magnificent house in Tbilisi, which in 1876 was part of Elizaveta Tamamsheva’s dowry on her wedding to Mikhail Smirnov, a Russian botanist and ethnographer.

During the Soviet period, however, it was confiscated by the municipality. And while today the house is home to a museum that commemorates both the Tamamshevs and Smirnov, it carries the latter’s name.

Pantheon, or what’s left of it

Elsewhere in Tbilisi is Khojavank, an architectural complex in the north-eastern part of the Avlabari district of the city.

Integral to Khojavank was a huge memorial cemetery, which remains the burial site of many prominent Armenians, including writers Raffi and Hovhannes Tumanyans.

Parts were destroyed by the Soviets however in 1937, and what was left was taken over by the Georgian Orthodox Church in the 1990s, its heritage further erased by the subsequent construction of the huge Holy Trinity Cathedral. The tiny section that remains, together with some relocated gravestones, is preserved as the Armenian Pantheon of Tbilisi.

Sarkisyan says that Armenian heritage is viewed by many in Georgia as a “competing memory”.

“The most important thing is to realise that Armenian architecture and legacy, in general, cannot be taken away from Georgia. It is our [Georgian-Armenian] shared heritage,” she says.

“We can benefit mutually from its existence.”