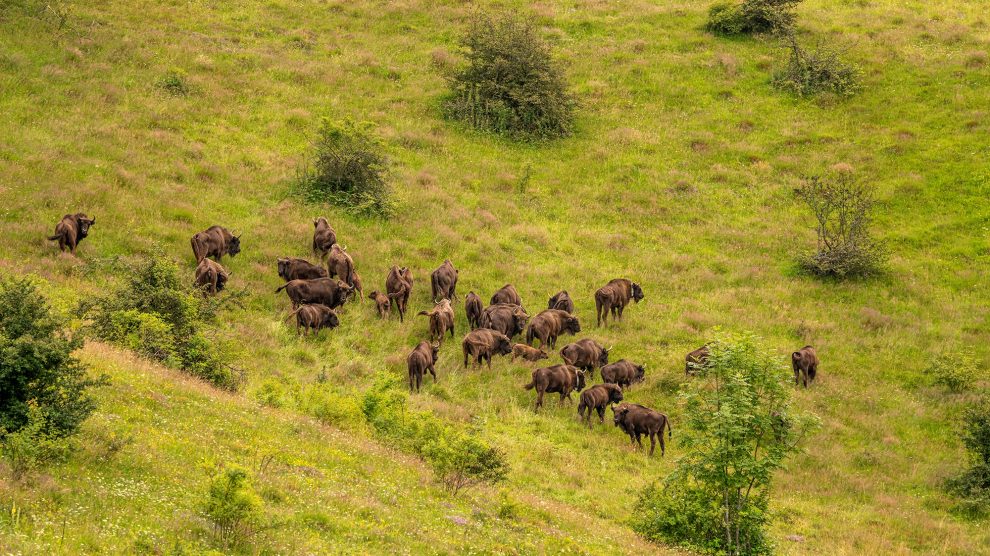 Good news stories might have been hard to come by in 2020, but in the midst of a challenging and tumultuous year, the European bison (Bison bonasus) has moved from vulnerable to near threatened thanks to continued conservation efforts.

Concerted, long-term conservation work, including that by World Wildlife Fund (WWF) Central and Eastern Europe and WWF Romania, means that European bison (Bison bonasus) – Europe’s largest land mammal – are no longer considered a vulnerable species in Europe, according to the most recent update of the International Union for Conservation of Nature (IUCN) Red List of Threatened Species.

The European bison population has increased from about 1,800 in 2003 to over 6,200 in 2020; meaning that the species has moved up the IUCN classification to “almost threatened.”

Romania is among the few countries with bison roaming in the wild.

There are now more than 100 bison in three different areas in Romania: Vânători Neamț Natural Park, Făgăraș Mountains and Țarcu Mountains. The largest population – of over 65 bison – is in the Tarcu Mountains, where the herd was developed as an initiative by Rewilding Europe and WWF Romania.

Bison have been transported from reserves and breeding centres in Europe by the Life Bison Project, a WWF partner, following a complex selection process to ensure genetic diversity.

The aim of the Life Bison Project is to create a viable population that breeds in the wild and develops both biodiversity and sustainable entrepreneurship ideas based on ecotourism for local communities to thrive.

The Life Bison team carefully monitors the behaviour of bison to ensure their well-being and coexistence with locals living and working near the rewilding area. The bison is an umbrella species that safeguards the quality of life of other species in the food chain and maintains the natural balance on which we all depend. It has become a local symbol that has allowed locals to rediscover the richness of nature around them, wonderful landscapes that fascinate tourists in search of adventure experiences in the wild or tranquility in the villages.

“The bison calves born in the wild and the support of local communities are good signs that bison belong to these ancestral lands, but let’s not forget that the species is still threatened by various challenges, from habitat loss to ambiguity in legislative processes,” says Marina Drugă, Life Bison project manager, WWF Romania. “That is why we believe that only by working together can we ensure the progress made in the last 70 years will not decline, but that we will witness a change for the better.”

Rarer than the black rhino

In the early 20th century the European bison was rarer than the black rhino and survived only in captivity.

The reintroduction of the bison into the wild began in the 1950s, and in Romania in 2012. The largest subpopulations are now found in Poland, Belarus and Russia, but only eight of these herds are large enough to be genetically viable in the long run. The species remains dependent on ongoing conservation measures, such as the relocation of bison to optimal habitats to create viable populations and the promotion of human-bison coexistence.

The reintroduction of bison in the Romanian Southern Carpathians is carried out as part of  a the Urgent Actions for the Recovery of European Bison populations in Romania, implemented by WWF Romania and Rewilding Europe, in cooperation with local communities and with financial support from the European Union through the Life Programme.

However, despite the good news, there is still work to be done.

Dr Bruno Oberle, director general of IUCN, says while the recovery of the bison is a powerful demonstration of the conservation in action, “the growing list of extinct species is a stark reminder that conservation efforts must urgently expand.”

“To tackle global threats such as unsustainable fisheries, land clearing for agriculture, and invasive species, conservation needs to happen around the world and be incorporated into all sectors of the economy,” he adds.