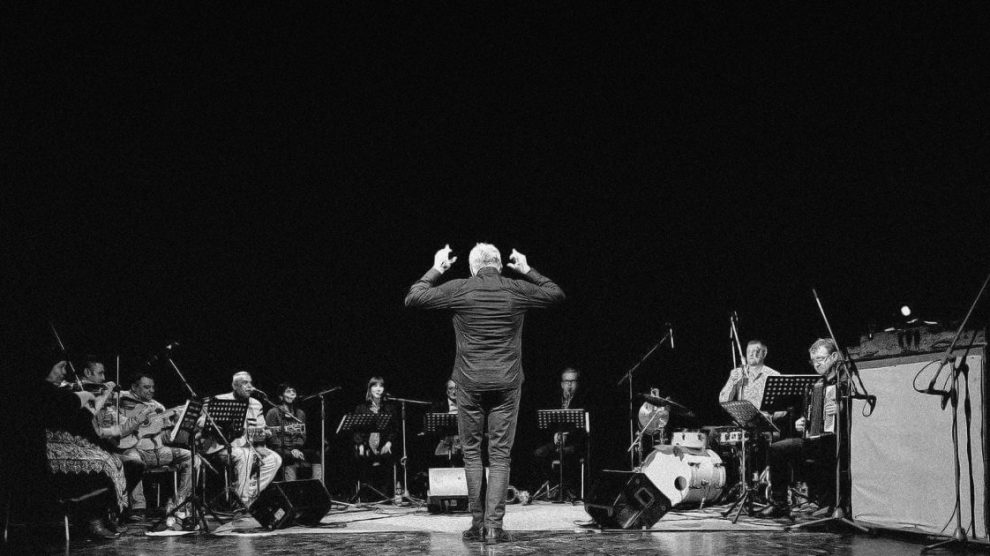 Angrusori’s latest album is a mesmerising and moving glimpse of the soul of a secluded society, told through a musical fusion that foregrounds tradition.

Angrusori – a musical project headed by Norwegian organist Nils Henrik Asheim and Czech violinist and vocalist Iva Bittová – has a new album and by all accounts it’s pretty good.

Released by Hudson Records, the project’s new album Live at Tou was named the contemporary album of the month by The Guardian at the start of May.

There are 11 traditional Romany songs on the album, including ancient ballads collected by musicologist Jana Belišová while travelling among the Roma of Slovakia. A kind of klezmer waltz, and Tom Waits-style jazz are also there.

“The result is a mesmerising and moving glimpse of the soul of a secluded society, told through a musical fusion that foregrounds tradition: timeless songs of heartbreak, illness and poverty take centre stage, augmented by the subtlest of improvisatory gambits,” writes The Wire.

“The Gypsy story is one of migration – from Gujarat to Andalucia – and the music here visits many stations along that journey,” says The Guardian.

The first collaborations between Stavanger-based Kitchen Orchestra and the Roma from eastern Slovakia started in 2016, resulting in the birth of Angrusori.

“The story behind Angrusori goes all the way back to 2010 actually, and involves the two cultural factories Tabacka (in Kosice, Slovakia), and Tou (in Stavanger),” Petter Frost Fadnes, Angrusori’s saxophonist tells 15questions.

“Actually, I was not at all sure that the project would create a good match,” says Nils Henrik Asheim. “In the case of Angrusori, so much was different. Social conditions, language, the musical practice. I foresaw that the people of this band very likely would have completely divergent ideas of what it is to be on stage and play a concert. I was afraid we were being naive in imagining a ‘cultural meeting.’”

“Angrusori consists of really strong individual musical characters, so the approaches are just as much between us as people as it is between Slovaks, Czech, Roma and Norwegians,” Asheim adds.

“Also, someone like Gjertrud Økland (violin) and Johan Egdetveit (accordion), actually brought Roma experience to the project, whereas Ståle, Stine (vocals) and I in particular had no experience whatsoever, so the competency between us is rather floating. Nils Henrik and Roman (cello) would sometimes play classical pieces together in the breaks, and some would play standards or string-swing,” adds Frost Fadnes.

Euro 2020: What chances of a winner from Central and Eastern Europe?
Writer who called Poland’s president ‘a moron’ wants his day in court
Comment