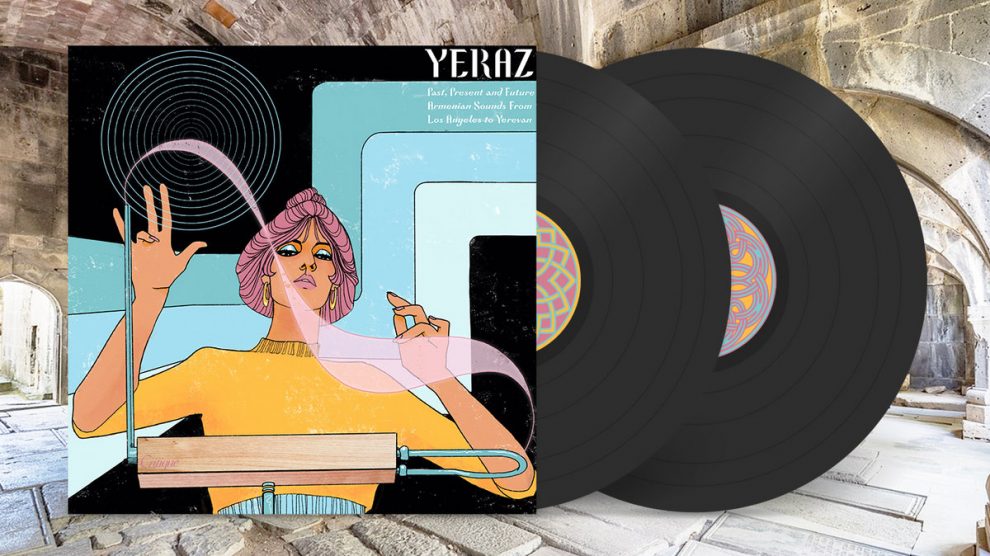 Armenian music is currently in the global spotlight, thanks to Yeraz, a curated album featuring artists from Armenia and the Armenian diaspora.

Yeraz is Armenian means ‘dream’, and there is hardly a more fitting title for a compilation album featuring a variety of artists from Armenia and the Armenian diaspora.

The 10 tracks – half from local artists and the other half from members of Armenia’s sizeable diaspora – drift from ambient to groove to frenetic, but carry a unified sense of dreamy Armenian musical expression. Traditional instruments are woven effortlessly into electronic production, allowing the tracks to be simultaneously contemporary and grounded in Armenian culture. The result is quite special – a melange of lo-fi, downtempo, soul-tinged music alongside funky, pulsating and energetic tracks.

Yeraz came about as a result of a collaboration between Los Angeles-based creative agency Critique and Armenian non-profit organisation Kooyrigs.

Zach Asdourian, head of artists and repertoire for Critique, himself a member of the Armenian diaspora, initiated the project. All the proceeds from the album are to be donated to Kooyrigs, which has been carrying out humanitarian work for Armenians displaced from the recent conflict in Nagorno-Karabakh. This gives the project a particularly poignant place in contemporary Armenian life.

A story of Armenia

Everything about Yeraz – from it being the result of a collaborative initiative, to it having a mixture of Armenian and Armenian diaspora artists – captures much about the story of the Armenian people. And the timing of the release – shortly after a painful military defeat in the Nagorno-Karabakh war – is no coincidence.

Armenians have a difficult history. From the late 19th century, Armenians were subjected to horrific killings and pogroms carried out by an increasingly desperate, nationalist and vengeful Ottoman Empire in decline. This culminated in the Armenian Genocide, which began in 1915.

According to the International Association of Genocide Scholars, at least one million Armenians were killed during the genocide. As a result, Armenians scattered all over the world, giving birth to the Armenian diaspora.

Today, the Armenian government estimates that there are seven million people of full or partial Armenian descent around the world, more than double the population of Armenia itself. Countries as distant as Mexico and Ethiopia to this day have Armenian communities.

Tennis champion Andre Agassi, pop star Cher and the hard rock band System of a Down all hail from the Armenian diaspora.

Support for the homeland

The diaspora is known for retaining strong cultural and emotional ties to the home country. This sentiment was shown in full force during the recent war in Nagorno-Karabakh: over 150 million US dollars were raised by the Armenian diaspora for the war effort and for humanitarian relief. That Yeraz is a continuation of this phenomenon of support and solidarity between the diaspora and the home population comes as no surprise.

The songs on Yeraz are both rooted in Armenian culture and eclectic, encapsulating the journey of the Armenian people. The opening track, Sky, composed by Brooklyn DJ Emil Abramyan features a cello being softly plucked over elaborate crunching synths and unconventional percussion.

On the second track, made by Lebanon-born producer Bei Ru, a shimmering qanun melds with soulful piano chords and soft drums to produce a tranquil piece of music, evoking neo-soul legend D’angelo. Another track features no instruments, other than a trio of duduks, an ethereal-sounding Armenian flute. Aptly titled Three Duduks, and running at nearly 13 minutes, it is an ambient and ambitious piece by Los Angeles-based indie musician, Angel Deradoorian.

All of the artists on Yeraz pay much deference to their home culture through integrating their traditional instruments into the contemporary music the artists themselves produce. It illustrates the deep connection the Armenian diaspora feels with its ancestral homeland.

Ironically, on Yeraz it appears to be the diaspora artists who use more traditional Armenian elements than the Armenia-based artists. The first track on the album made by a local artist is the pulsating Masiv Calling by a mainstay of contemporary Armenian nightlife, the DJ and producer Kamavosian. It is a thumping club banger that could easily have come out of one of Berlin’s many underground clubs.

Antsi Antsnem, by Melineh, another stalwart of the Yerevan club scene, features a delightfully bouncy instrumental over which Melineh’s soft, lilting Armenian-language vocals weave in and out.

Love Delivery, a funky track by Yerevan DJ Serjo pays homage to the disco-influenced French house of the 1990s.

Yeraz is an important moment in contemporary Armenian music. The nature of its inception captures the connection between the Armenian diaspora and the native population, and the enormous efforts of the diaspora to help its ancestral homeland.

And the music itself is riveting and authentic, a microcosm of Armenian history – of a country situated on the crossroads of two continents, with an eclectic culture, reinforced by a diverse yet unified diaspora.

You download a digital version of the album from Bandcamp.

A limited-edition vinyl release is scheduled for May.