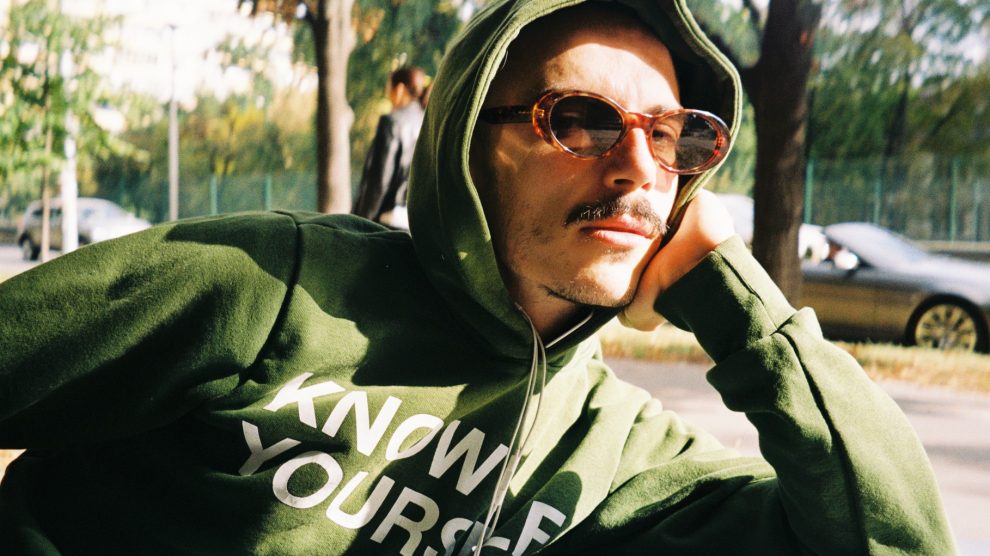 Zbaraski is quirky, eclectic and idiosyncratic – but firmly Ukrainian.

I’ll take two espressos. Because I want it like that.

So begins Zbaraski’s RnB-tinged debut single, Cofein. Sung over a breezy instrumental built around a guitar and vocal sample, the track instantly stood out in the homogenous Ukrainian music scene.

The accompanying music video is shot in a quintessential Ukrainian countryside home and is packed with motifs familiar to all Ukrainians – oladky (Ukrainian pancakes), a beat-up Lada, shashlyky, slate roofs – all while Zbaraski sings in a soft falsetto about his love of coffee.

The result is quirky, eclectic and idiosyncratic – but firmly Ukrainian.

Ivan Zbaraski, 29, was born in Pidvolochysk, a sleepy town of 7,000 in the western Ukrainian region of Ternopil. Growing up in the turbulent post-Soviet years with Ukraine taking its first tentative steps of nationhood, he was first imbued with a sense of pride for his culture by his father, a painter. However, he was drawn to music – and hip-hop in particular – more than anything else.

Influenced by his older brother, who studied in the regional capital, the young Zbaraski began listening to the stalwarts of the era, like Eminem, Snoop Dogg and The Fugees. This already distinguished him in his small town.

‘Why is he just talking?’

“I remember, my parents didn’t understand it at all. They would say ‘he needs to sing, why is he just talking?’ I had no one around to talk about hip-hop with,” Zbaraski tells Emerging Europe.

Although he didn’t understand the lyrics he was listening to, hip-hop deeply influenced Zbaraski’s upbringing. Living in a town like Pidvolochysk comes with its drawbacks – the social atmosphere can be suffocating in small, like-minded communities where everyone knows each other, making it difficult for a person to grow. A sense of conformism – for better or worse – often pervades such environments.

“I was a dreamer from childhood. I was aware I had bigger dreams than those around me,” he says, adding that he nevertheless still gives a shout out to his hometown during concerts.

This dissonance between Zbaraski and his environment fueled his love for hip-hop.

“For me, listening to hip-hop was protest. Against parents, against school,” he says.

Zbaraski studied in Lviv. He ended up staying in the city for eight years, finding work as a journalist. At the age of 17, he downloaded FL Studio and began making his own beats. In 2017,  these sessions came to make up his debut EP, Bo Ya Tak Khochu (Because I Want It Like That). Upon completion, anxiety paralysed him – he didn’t release the tape for nearly two years.

The EP – just seven tracks in total with a runtime of 25 minutes – instantly stands out in the Ukrainian contemporary music scene. Zbaraski’s fluttering falsetto meshes with elaborate electronic production and experimental song structures to create a unique listening experience.

Take the album opener, Mood, as an example – pulsating synths and odd aquatic sounds form the foundation of the track, over which Zbaraski sings the refrain 24 hours a day. There is no ‘hook’ in the conventional sense – in fact, virtually the only lyrics in the track are in the refrain, which is hypnotically repeated throughout.

Or the third track, Zebra. Heavily distorted vocals trudge over a sinister instrumental, creating a menacing, cinematic atmosphere. It’s nigh on impossible to make out the lyrics through the layers of filtering on Zbaraski’s voice. The song is capped off with a Twin Peaks sample at the end, a nod to Zbaraski’s favourite film director.

Even the debut single, Cofein, which can be considered the most ‘poppy’ song of the EP, goes nearly a full two minutes before it gets to the hook. The hook is then sung just once before the song smoothly transitions to the outro.

When asked why he made such unconventional and experimental production and songwriting choices – especially for his debut tape – Zbaraski’s response was simple: “Because I want it like that.”

With Ukraine still in the midst of its quest for its identity, Zbaraski’s choice to sing exclusively in Ukrainian is of particular interest. For him, this is very much a conscious choice. From an early age, his family (particularly his father) raised him with a sense of pride for his culture.

In 1946, his 15-year-old grandfather drew a tryzub, a Ukrainian national symbol, and was arrested by Soviet authorities wary of any displays of ethnic nationalism. He was sentenced to 15 years’ imprisonment in Kazakhstan (although the sentence was commuted after the death of Stalin). Such stories, combined with his parents exposing him to Ukrainian art, music, literature and film, imbued in Zbaraski a strong feeling of patriotism – the kind that seems unique to struggling nations.

The Ukrainian music industry has always been dominated by artists singing in foreign languages – usually English or Russian, presumably because of the wider market in these languages. In a way this is a microcosm of Ukraine as a whole. But Zbaraski rejects this trend. “If I wanted to listen to music in English, I’d listen to US artists, not Ukrainians singing in English. Same for Russian.”

For Zbaraski, cultural consciousness is absolutely vital for a nation to develop – and a major component of cultural consciousness is language. This is a particularly pertinent statement today as Ukraine jostles with its complex and multifaceted identity. The language laws passed in recent years – stipulating the exclusive use of Ukrainian in businesses, for example – illustrate this struggle.

“This isn’t about politics or hate. It’s about knowing yourself, remembering yourself and your culture. Because this culture is very deep and very rich,” says Zbaraski.

Ukraine’s SovMod gems are worth saving
Zlata Bartl, the woman behind the best-loved spice in the Western Balkans
Comment