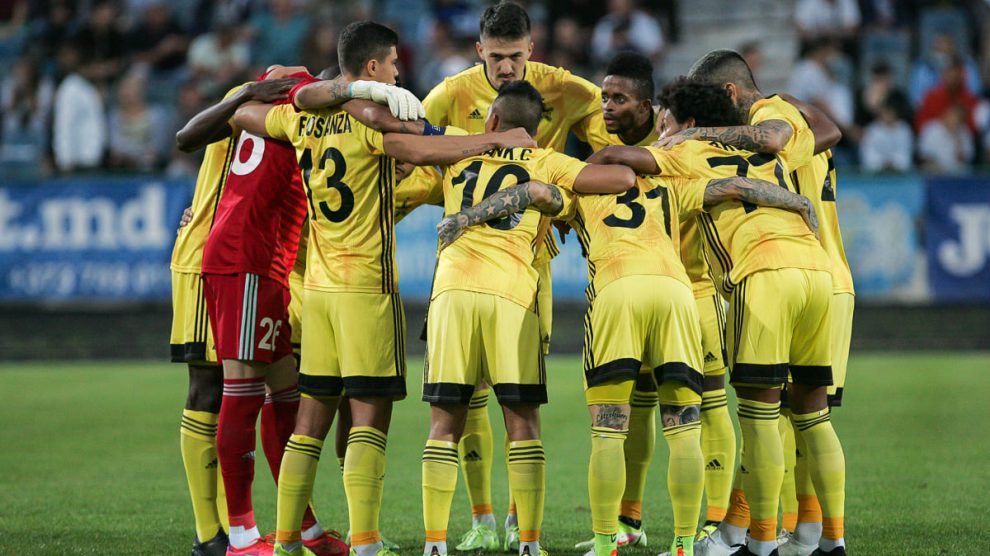 A team from Moldova, one of Europe’s poorest countries, has for the first time qualified for the group stages of the UEFA Champions League, football’s richest competition. Ironically, the team, Sheriff Tiraspol, is based in Moldova’s breakaway region of Transnistria.

FC Sheriff Tiraspol made history on August 25 when a 0-0 draw at Dinamo Zagreb secured their qualification to the prestigious UEFA Champions League. A week earlier, Sheriff had defeated Dinamo 3-0 in Tiraspol.

The country has rarely made any impact on the footballing world, whether at club or international level. That a club competing in the Moldovan league, one based in the economically deprived de facto state of Transnistria (which calls itself the Pridnestrovian Moldavian Republic), could make the group stages sent shockwaves throughout European football.

“This will be remembered as an iconic moment in the history of Moldovan football,” says Emanuel Roșu, a Romanian football journalist. “It’s out of this world. Honestly, I still can’t believe it happened. I am sure this is the biggest surprise in the history of the Champions League, given the context.”

Sheriff’s achievement is the culmination of decades of work. The club was founded in 1997 and has since won the Moldovan championship 19 times since then, including a ten-year winning streak from 2000 to 2010. The club managed to first qualify for the group stages of a European competition in 2009, when it competed in that year’s edition of the Europa League, European football’s second-tier event.

Now, with a diverse squad representing 19 different nationalities, Sheriff Tiraspol will be playing on the biggest stage of club football.

Populated primarily by ethnic Russians and Ukrainians, Transnistria is a small sliver of land on the left bank of the Dniester River that has been functioning as a de facto independent country since a brief war in 1992. It is currently unrecognised by the international community (save for three other unrecognised breakaway territories – Abkhazia, South Ossetia and Artsakh) and is heavily propped up by Russia, which provides free natural gas and pays the pensions of the territory’s citizens.

Furthermore, a Russian army contingent continues to be stationed in the breakaway territory, safeguarding the territory’s de facto independent status.

Although a lack of international recognition has caused Transnistria to fall behind Moldova economically, FC Sheriff Tiraspol has been a beacon of success. Its name derives from one of the main companies operating in Transnistria, Sheriff.

“Sheriff [the company] dominates day-to-day life in Transnistria and Tiraspol,” explains Roșu. “It’s a big company, they have business in almost every sector from construction to advertising to supermarkets. The team is just an extension of that policy. They always had the best players in Moldova, they went for foreign coaches and wanted to build a strong team.”

The chairman and founder of the team is Viktor Gusan, who also founded the parent company. Gusan allegedly holds Ukrainian citizenship, and owns several luxury residences throughout Ukraine, including at least one that has been the subject of investigation for unauthorised construction.

At the helm of the club since it was created, Gusan also oversaw the construction of Sheriff’s stadium in 2002, a 12,746-seat ground in Tiraspol with amenities sufficient to allow it to host European matches. It remains the largest and most modern stadium in Moldova.

Somewhat ironically, Moldova’s national team has on occasion played at the stadium.

With the backing of one of Transnistria’s main business conglomerates, and its modern stadium, Sheriff was always well-placed to dominate Moldovan football. It was also the first Moldovan side to sign players from South America and Africa. Being based in an unrecognised territory is not, it would appear, a major disadvantage.

“They pay good money compared to their competitors, and they have an excellent scouting department good at finding players literally all around the world,” says Roșu.

In fact, Rosu believes that being based in Tiraspol, a city with few of the amenities expected in decent sized European cities, is an advantage.

“As a player, you don’t have any other options in Tiraspol other than playing football. So that’s a good thing for the board and the coach: no other attractions in the city, no diversions.”

Since first qualifying for the group stages of the Europa League in 2009, Sheriff has managed to attain a new level of success. Qualification for European tournaments earns huge sums of money for teams, both from the organisers of the competition in the form of prize money and from television broadcasters – for sides from countries like Moldova, a single year in the group stage of a European competition can pay wage bills for years.

Now, having qualified for the Champions League, Sheriff has earned one of the biggest jackpots in football, and one which is nearly guaranteed to transform the club’s future and cement it as Moldovan football’s juggernaut.

This year, all 32 teams which qualified for the Champions League group stages will automatically receive approximately 18.6 million US dollars in prize money. This is without considering revenue raised from broadcasting rights, or prize money based on performance – just one win in the group stage, for example, nets the winning team an additional 3.3 million US dollars.

Sheriff will have to be at their best to maximise their earnings from this campaign, however. The draw was not kind: they are set to play Real Madrid, Inter Milan and Shakhtar Donetsk, all strong teams with an impressive pedigree in European competitions.

While Sheriff have shown they are not to be underestimated, with good wins in qualifying against Red Star Belgrade (a former European Cup winner) and Dinamo Zagreb, their chances of progressing are slim.

But for fans in Tiraspol, this year will be an incredible opportunity to see some of the world’s biggest teams and most famous players come to their erstwhile unheard of town and compete against the local team.