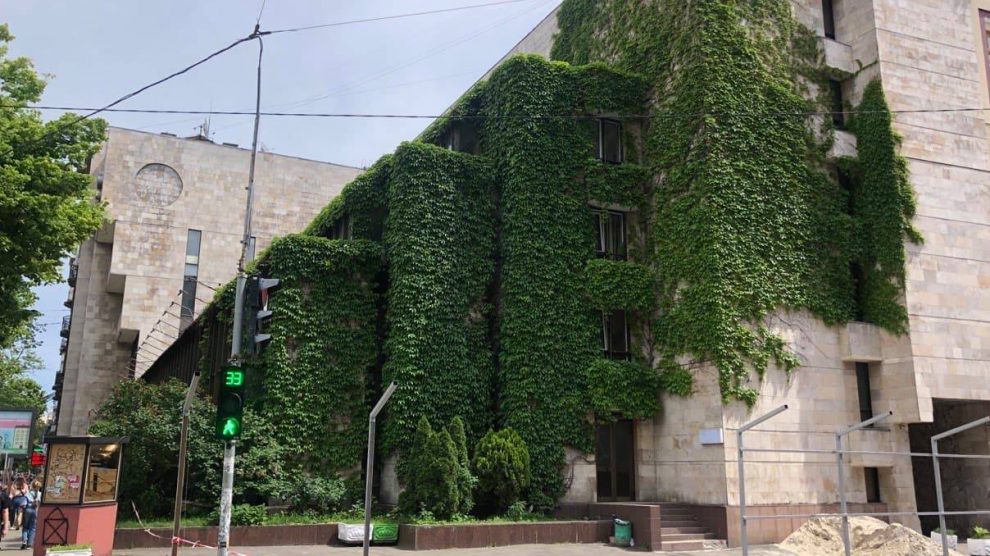 Young Ukrainian activists have managed to successfully halt the demolition of an iconic modernist building in central Kyiv, showcasing the effectiveness of direct action.

Visitors walking around in central Kyiv would likely have had a glimpse of the Kvity Ukrainy (Flowers of Ukraine) building, located on Sychovykh Striltsiv street.

Even in a city full of modernist gems (not least the UFO-shaped headquarters of the Institute of Scientific Research), the building stands out: while built in the distinctively modernist style, it was notable for its facade covered in grapevines and an atrium illuminated by large windows.

Completed in 1985 to the designs of Ukrainian architect Mykola Levchuk, the Kvity Ukrainy building was the headquarters of an eponymous institution which was dedicated to the study of flowers.

Levchuk won the ‘Building of the Year’ prize from the Soviet Union’s Architects’ Union for his creation.

In its heyday, the Kvity Ukrainy building hosted a flower shop (naturally), a research centre and a greenhouse. Art exhibitions were regularly held in its well-lit atrium and several rooms held regular classes and workshops in floristry, available for the general public.

Following Ukraine’s independence from the Soviet Union and the subsequent reduction of funding for such state institutions, the building’s owners began leasing spaces to small businesses. Recently, it was announced that real estate developers PrJSC Flowers of Ukraine had acquired the building and were planning to demolish it, resize it, and turn it into a shopping centre and co-working space.

The plans suggested that the developers were intending to replace the building with the type of glass monstrosity that has become unfortunately all too common in contemporary architecture.

On July 12, the developers began work. An urgent call was sent out throughout social media, mobilising people to come to the defence of this unique historical building.

In recent years a movement in Ukraine has emerged to counteract some of the de-Sovietisation projects undertaken by the Ukrainian government.

Countless buildings, monuments and mosaics have been removed or “refurbished” to the point of imperceptibility, to remove the associations with the past. Social media pages like Ukrainian Modernism and Save Kyiv Modernism began springing up, attracting tens of thousands of followers and revitalising interest in the unfairly maligned Soviet modernist style (known as SovMod).

These groups were at the forefront of efforts to conserve the Kvity Ukrainy building. Within hours of construction beginning, dozens of activists stormed the construction site and occupied what was left of the building. 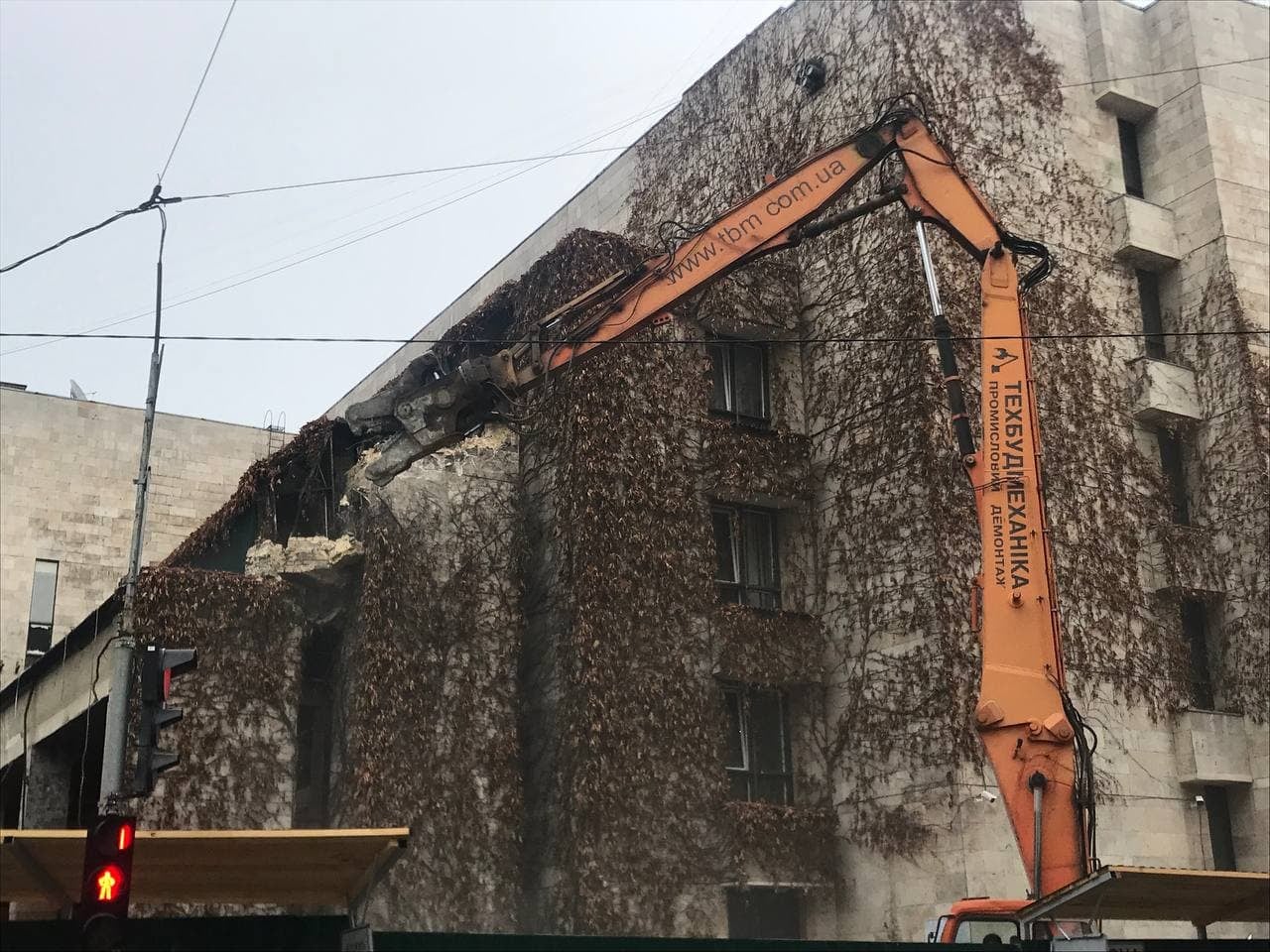 They were too late, however, to save the atrium, which at that point had already been demolished.

The activists camped out at the building the whole night. At many points, it resembled more of a party than a protest: more and more people gradually turned up throughout the evening. The crowd was an eclectic mix: the protest organisers were primarily young, creative types. These were joined by residents of the neighbourhood and older folk concerned about their city losing its character.

The same day, the protesters even managed to convert a government official: Oleksandr Tkachenko, Ukraine’s Minister of Culture, took to social media to support the protest.

“For my part, I want to remind Vitali Klitschko and the Kyiv city administration that the facility is located in a historical part of Kyiv. Accordingly, I call on the city authorities to take a more careful approach to the issuance of town-planning permits and restrictions, and not to distribute them at a level that will completely disgrace the city,” Tkachenko wrote on Facebook.

The protests were successful: within 24 hours of construction beginning, officials ordered a halt. The Ministry of Culture has since announced that it has launched an investigation into how the company behind the reconstruction acquired a permit to build a structure that is jarringly at odds with its surroundings in the historical neighbourhood.

However, activists are wary of declaring victory just yet: they maintain constant surveillance of the site, in case a backroom deal precipitates the recommencement of construction.

“In Ukraine, the state is structured around the interests of the ruling class. Profit for the ruling class supersedes everything – cultural preservation, workers’ rights, everything,” says Anton, a moustachioed university student keeping watch at the site. “But at least we have the rights on paper. People just need to be motivated to go and claim them.”

Although the battle isn’t yet fully over, the episode at least showcases the substantial steps Ukraine has made in democratisation, and the ability of ordinary citizens to reverse decisions made by powerful institutions.

In other developing countries, it is not unheard of for such protests to be broken up forcefully either by police or goons hired by the developers. That the protests were allowed to happen, unabated, uninterrupted, bodes well for Ukraine’ future.

And the success of the protest can give hope to regular people that, with enough direct action, they can assert the rights afforded to them by the constitution, and even mould a state into an inclusive, popular, democratic institution, free of the corruption, cronyism and nepotism that has plagued the country for decades.